Nintendo has a history of one of the greatest and long standing gaming companies ever. It has brought us great consoles such as SNES and the Game boy. A revolutionary jump forward came when they released the Wii which was a game console that used motion sensor controllers. Continuing with its innovations, the company completely revolutionized the handheld gaming experience when it released the Nintendo 3DS Handheld Console in March 2011.

The Nintendo 3DS Handheld Console allows you to play 3D games without a need of any special glasses. You can watch videos on the go in thrilling 3D. The graphics of the gaming console are just superb that allows you to lower the level of 3D effects or completely turn it off to play your favorite games in sharp and clear 2D.

The Nintendo 3DS is sleeker than its earlier version DS and its top screen is completely auto-stereoscopic 3D that means you don’t need 3D specs. In looks it is very similar to the Nintendo DS and has a backward compatibility with Nintendo DS series software. The Nintendo 3DS Handheld Console is about 135mm x 74mm and weighs approximately 8 ounces. The lid of the gaming console has two cameras. The stylus offered by this gaming system is also adjustable to make the touch control more user-friendly.

Features of the Nintendo 3DS

Two Screens — The Nintendo 3DS contains two screens. The lower one has the same touch screen technology as with previous Nintendo DS models and a resolution of 320 x 240 pixels. The top screen is wider and displays a 3D image. This screen shows a resolution of 800 x 240 pixels. More than 16.77 million colors are brilliantly displayed on each screen.

3D screen — The upper screen has a stereoscopic 3D display that gives its players a feeling of space and depth heading towards the back of the screen. You don’t need to put on any 3D glasses to get the 3D effect as the 3D effect is created by allocating 400 pixels to each eye. Any kind of game becomes exciting playing in 3D with each players and every object in the game so clearly visible.

3D depth slider — A built in 3d Depth Slider allows you to easily change the intensity of 3D effects. You can even turn the 3D effects completely off to enjoy the games in 2D which is more clear.

Motion Sensor and Gyro sensor — These two all new and exclusive built-in sensors allow your gaming console to become sensitive to motion i.e. whenever you will move, tilt, twist, bring it down, you 3DS game system will respond to your action.

3D camera — Two cameras on the outer side of the Nintendo 3DS which allow photos, videos and animation to be taken in 3D. There is also an inward facing camera to take pictures of the player.

Analog control — You have complete analog control in 3D world with the use of a circle pad which can be easily manipulated.

StreetPass™ — This new feature allows you to communicate with other players when you are going somewhere. You set your console on Sleep Mode and you can easily share your gaming data with other gamers you pass by. Data like Mii™ characters, your scores, your personalized characters, all can be shared. Data of multiple games can be shared at one time.

SpotPass™ — Whenever you are around a hotspot zone the Nintendo 3DS will connect to the wireless internet automatically and automatically download things like exclusive 3D videos from Nintendo Video™ service, games contents, etc.

Backwards Compatibility — Any games you have from the older Nintendo DS or DSi will work on the Nintendo 3DS but be played in 2D.

SD Memory Card Slot — A handy slot for an SD memory card allows you to increase storage space on your Nintendo 3DS for saving or importing photos, videos, music and sound recordings. All new Nintendo 3DS should come with a 2GB memory card included

When power and visual outputs are considered, the Nintendo 3DS Handheld Console wins hands down compared to it predecessors. With loads of features to offer to its players it should be a serious consideration no matter what type of gamer you are. 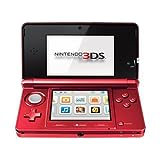