Some facts, quotes, and history for avid players or new comers to the games of Solitaire, Patience, Success etc.

Any card game played by one person using one or more normal packs of cards. These are dealt out in a regular pattern with the object being to then arrange the cards in a specific manner.

Also known in the United Kingdom as ‘patience’, in France as ‘reussite’ (success) and in Denmark and Norway as ‘kabale’ (intrigue/deceit).

The word ‘solitaire’ originates from the Latin ‘solitarius’ which means ‘lonely’ or ‘isolated’. Around the early 16th Century it was used in English to mean ‘a widow’ and by the 18th Century its meaning changed to ‘a recluse’. The first use of the word to mean a card game was around 1746 (source OED).

There are now over 220 versions of the game with the most popular being,

The first book about the pastime (in 1874) refers to the games of ‘solitaire’ and ‘patience’ as being no different to each other.

A game of solitaire starts by the player shuffling a pack of cards with the aim being to follow certain rules to get the cards back in order.

A successful end result will usually be four piles of 13 cards with each pile containing all the cards of a suit in descending (King to Ace) or ascending order (Ace to King).

Games are always a game of chance, which require a degree of patience, intuition, analysis, and judgement.

Because it is such a difficult game to win, Accordion Solitaire is also known as ‘Idle Year’, ‘Methuselah’, or ‘Tower of Babel’.

All 52 cards are aid out in a single row. If necessary, due to space constraints, the row may be split into three separate rows. The aim is to compress the entire card deck into one stack of 52 cards by moving cards (and stacks) onto one another.

Providing the top cards of a pile matches in either rank or suit then any pile can be moved onto the pile to its left or third left. You can only move entire piles.

The connection to golf is the fact that the game of Golf Solitaire requires a player to try to earn the lowest number of points over the course of nine deals. It also has a higher ratio of skill to luck than other solitaire games.

From a standard 52 card deck deal seven columns of five cards all face-up. This is known as the tableau. The remaining 17 cards are placed face down to form a draw pile or ‘the stock’.

The aim of the game is to remove all 35 cards from the tableau to a discarded pile. Cards can be removed to the discard pile only if they are one point above or one point below the value of the most recently placed card on the discard file.

After the stock has run out each remaining card in the tableau scores one point. If the tableau is cleared then a player scores a negative point for every card remaining in the stockpile. The game is played over nine deals (or holes) and a par is considered to be 45 or lower and a perfect score being zero or lower.

Arrange a tableau of seven columns of cards with the top card facing upwards. The remaining cards form the draw pile. The aim is to move all 52 cards in the deck into four suit-specific foundation stacks above the tableau commencing with the ace. As cards are revealed in the tableau columns (or turned from the draw pile) they can be moved in ascending order (ace to king of identical suits) to form four foundation stacks.

When they become exposed two aces of the same colour (red or black) are moved to the two foundations along with two kings of the opposite colour. The foundations are built in ascending or descending order as playable cards are exposed in the tableau stacks.

Arrange 28 cards face-up in a seven level pyramid shaped tableau. The remainder of the cards form the draw pile.

The aim of the game is to remove all the cards from the pyramid by forming pairs with a thirteen point combined value. These pairs may be formed from two exposed cards in the pyramid, or by pairing a pyramid card with another card taken from the draw pile. The King is valued at 13 points, the Queen 12 and so on down to the Ace, which has a value of one point. The remaining cards are scored at their face value.

Similar to ‘Klondike Solitaire’ with the differences being, the ability to move groups of cards and all cards are dealt at the start of the game, some face down.

The aim is to move all 52 cards into four suit-specific foundation piles in order starting with the aces.

The set-up is the same as ‘Klondike’ except that instead of a draw pile all remaining cards are dealt face-up onto the tableau stacks.

As they are exposed Aces are moved to begin the foundation stacks and then other cards added in sequence order. 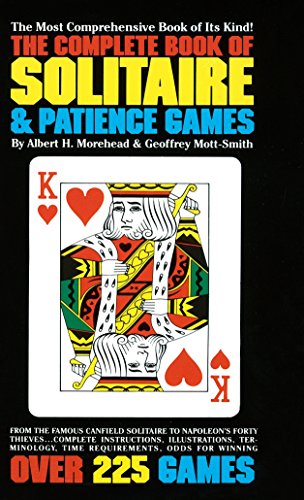 The Complete Book of Solitaire and Patience Games: The Most Comprehensive Book of Its Kind: Over 225 Games
Buy Now