Meet Spike, the Ultimate Dinosaur toy by Fisher- Price. Spike the dinosaur is one of the coolest toys around! You can't help but smile as you watch little one stomp through the house excitedly roaring like a mighty Tyrannosaurus Rex in his imaginary world of dinosaurs. Little guys quickly acquire a growing fascination with dinosaurs that typically begins around toddler age when they start mimicking the actions of these mammoth creatures. Interactive dinosaur toys are usually a favorite of toddlers, particularly ones that move and make noise. One such toy is the Fisher-Price Imaginext Spike the Ultra Dinosaur. Spike is a large green, very amazing and very fearless, Brontosaurus dinosaur that will captivate any child's attention with his appearance, his size and his outstanding electronic features. Spike is a remote controlled dinosaur that can walk, stand on his hind legs, open and close his mouth, make awesome and fun prehistoric sounds, and even has light up features that will thrill little boys and girls ages 3 to around age 10.

This is one awesome toy dinosaur

A Durable and Adventurous Toy - Also available in RED 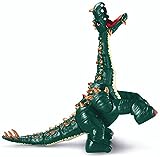 Fisher Price has really outdone themselves with Spike the Ultra Dinosaur. He is 27 inches tall with a fearsome yet whimsical appearance and will quickly become a fun playmate taking kids on exciting imaginary adventures. He has a yellow underbelly, a textured body of dark green, reddish orange spines from the tip of his nose to the tip of his tail, and a set of gnarly teeth. Kids love his flashing lights, blinking eyes, and light up spikes along with the mighty sounds he makes like a huge roar as he swings his head, or many other fun sounds like grunts, growls and snorts. Spike comes with a dinosaur bone, two plastic rocks, a wireless remote control, a battery charger, and a 9.6V NiMH rechargeable battery. Three "AA" alkaline batteries are required for the remote control which are not included.

Some set up is required before Spike is ready for play. His legs and tail will need to be snapped into place making sure the connection points are firmly in place to avoid problems with movement. Parts are color coded to make set up easy and an easy to follow instruction booklet is also included. The rechargeable battery should be fully charged (this will typically take about 4 hours) before using so that once Spike is put into action kids can enjoy continuous play. Now with the touch of a button Spike will enthrall every member of the family, kids and adults alike, with his movements and playful antics. The remote control is easy to operate, even for toddler age, with large buttons containing animated pictures that help kids to know which buttons control which features. With a little practice, kids will quickly learn how to maneuver Spike and combine movements really giving Spike a playful and fun personality.

- Spikes on his back and tail that light up

- Remote control buttons allow Spike to walk forward, turn right or left, swing his neck around, stand on his hind legs, swing his neck with a mighty roar, hand his head low, and open and close his mouth.

Spike is truly one of the coolest toys that a kid can play with. Due to the electronic features kids should be warned not to have him near water. He can also be a bit cumbersome to carry around for smaller children due to his mighty size. This Imaginext toy is rugged and durable and great for indoor or outdoor play. Spike will really spark a child's creativity and imagination and will be an incredible playmate. Even though Spike the Ultra Dinosaur is a bit pricey for a toy, parents who have bought Spike all agree that he is well worth the investment and will bring hours of enjoyment to any child as well as the entire family.

How To Control Spike

More Toys and Toys Reviews at