The Magic of Barbie Dolls

Barbie has been around for 50 years now. The first Barbie was released in March 1959. 50 years later, Barbie is still as strong as ever.

Since then, Barbie dolls have gained worldwide popularity and have managed to withstand the test of times. From its original design, this doll went on to have more than 1 billion fashions, including national dresses of different countries. Barbie, as a character, also starred in several adaptations of cartoons or animated movies (like the Nutcracker). Collectors of Barbie dolls and accessories have sprung up all over the world. Young girls (and even older women) from all sides of the globe want to have their own dolls. The industry of Barbie dolls and their accessories has grown and has become a $1.5 billion industry.

Few toys, dolls and figures have survived as long as Barbie did and have surpassed its records. And this begs the question why is this so. Just what is Barbie’s attraction to its market that enabled it to become number one in its industry? What is the magic behind Barbie? I do not attempt to have all the answers but through this hub, I will try to answer these questions.

The Glam Doll with Accessories

The Perfect Girl. For a lot of people, Barbie is the perfect girl. For some, she may be too perfect (at one time, her waist, if she was fully grown, would have measured only 18 inches!). But for a lot of people (especially women), she is the girl to aspire for. Not only in body measurements, but also in terms of her clothes, her lifestyle (with a dream job, dream house, dream clothes), her boyfriend and especially her beautiful looks. All these are the epitome of a girl’s secret dreams. And these dreams are universal, which will account for the fact that Barbie dolls are sold in 150 countries all over the world!

Her ‘Realistic’ Beginnings. Mattel, the creator of Barbie, was not only contented with designing and manufacturing the doll, they also gave her a life and a story! She has a full name – Barbara Millicent Roberts. She has parents – George and Margaret Roberts and she came from a fictional town of Willows, Wisconsin. She attended a (fictional) school and has an on-and-off boyfriend, her own pets, siblings and even cousins! She has her own career and she takes on all these multiple roles with ease.

Her Presence Everywhere. Barbie is distributed in 150 nations all over the world! You can find her on TV, in the Internet, in the stores and, if you have friends who collect Barbie Dolls, even in your everyday, social life! Mattel has conceptualized and brought out a lot of designs, looks, clothes, accessories and everything imaginable related to this doll. She even starred in her own cartoon movies (distributed for home viewing only, I’m not sure if they were shown in theatres). 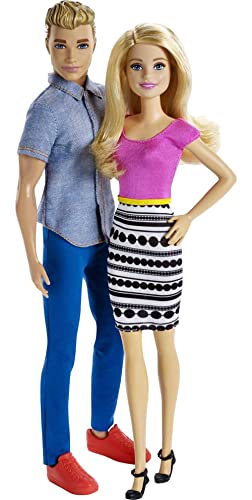 Her Links to Real Life. By links, I mean the fact that Barbie is often customized to reflect various looks, designs and dresses that we see out there. One example is her military series, which went through Pentagon for approval just to ensure the costumes are realistic! She already has 80 careers in her lifetime and the list is increasing. She was even a presidential candidate! She has a world collection which shows the dolls dressed in national costumes of various countries. And if there is a significant event in the world (like the tearing down of the Berlin wall), you can be sure that there’s a Barbie doll out there solely created to commemorate this event.

The Wide Variety of Choices. With over 45 nationalities represented by Barbie and countless clothes, accessories, cars, pets, CDs and even cameras, there’s a wide, wide variety out there to choose from. Want a princess Barbie? They have it. Want a rock & roll Barbie – available online and offline everywhere. Want to change your Barbie doll’s dress every hour of every day? You got it. Barbie even has her very own computer game (thanks Carol!). Plus, you can go online and customize your very own Barbie doll through My Design. The choices are so many that I don’t think you’ll ever get tired of your Barbie doll your whole lifetime.

Did I miss anything? I guess the last reason why Barbie dolls are so popular is because the company, Mattel, keeps on innovating and coming up with new designs and concepts for this doll. For them, this is a never-ending process and it’s worth it as Barbie remains up there and will remain up there for years to come.