A brief history of the tile game mahjong

We are going to learn about the tile game Mahjong but before we do let's start with some history.

According to Wikipedia: The game Mahjong is based on draw and discard card game that was popular in 18th and 19th century China during the Qing dynasty, some of which are still popular to this day.

There are a variety of different spellings such as Mahjong, Mahjongg, Mah Jong, and others however, it doesn’t matter how you spell it because all the variations mean the same thing fun!

The game was popular in China in the mid to late 1800s and reached the United States in the 1920s.

However, it was mentioned in a paper written by an American anthropologist Stewart Cullen in 1895.

In 1949 the People’s Republic of China completely banned the game because it was considered gambling.

At the time Mahjong was not the only game banned, other games like it were considered by those in power to be a representation of capitalist corruption, and the powers that be would not tolerate any forms of gambling.

It took another cultural revolution to bring back the game which flourished without the gambling element.

Finally, in 1985, it became legal to play the game again, and people in China and other Chinese communities began to play it with even more enthusiasm.

Banned or not more than likely the game was played in secret, a game that popular would not be completely shut down.

In public may be one thing but behind a closed-door may be another thing.

What is the meaning of the variety of different Mahjong tiles?

The tile game consists of 3 sets of suited tiles, 2 sets of honor tiles, and any number of variations of different tiles, usually, the tile is nature-based.

A game should consist of at least 136 tiles and will always be in multiplications of 4.

The Simple Tile:
There are 3 sets of basic tiles or also referred to as suits that are numbered from 1 to 9.

The numbers on the tile are often simplistic Chinese characters when the first and the last tiles sometimes appear unique due to their original game purpose, similar to what the Ace represents in a deck of playing cards.

These basic 3 sets represent Bamboo, Characters (myriad), and circles or bam – round bread. These sets will appear 4 times.

Bamboo represents the Axis of Earth, the circles are representing the Wheel of Heaven and the characters represent changes in the life of man.

The tiles used to represent Chinese currency like the “bams” are equal to their numerical value in copper coins, each “bamboo” is worth 100 copper coins (bamboo were used to carry coins) and each “myriad” is worth 10,000 copper coins.
The honor tiles:
Opposed to the basic sets, the symbols on the honor tiles are different and don’t have ranking or numerals on them.

The honor tiles are the four winds and the “dragons”.

The Three Dragon tiles do not represent real dragons, in Chinese culture Dragons can also mean the “basics of life”.

This being said the red, green, and white tiles; represent in order the 3 of the virtues in Confucianism – Piety, Benevolence, and Sincerity.

The Flower tiles:
One would think that the Flower tiles would be all about flowers however, they are not strictly symbols of flowers.

Flower tiles are usually numbered in Latin numerals from 1 to 4. The first common set is traditional Chinese flowers: Plum, Orchid, Chrysanthemum, and Bamboo.

The Second common set, are the four seasons: Spring, Summer, Winter, and Autumn.
Flower sets may represent flowers from the region where the game is played.

This is just an example of different tile there are Mahjong games that offer bonus tile and other specialty tile depending on the country of origin.

We will look closer at the other types of Mahjong and some of their characteristics below.

There are numerous versions of the game Mahjong and depending on what area the game is from will dictate the rules and the game pieces.

Not all Mahjong is played the same.

This version is the oldest surviving variety of Mahjong and was the version introduced to America in the 1920s under various names.

A descendant of the version of Mahjong introduced by Babcock to America in the 1920s.

Currently, this term largely refers to the " Wright-Patterson" rules, used in the U.S. military, and other similar American-made variants that are closer to the Babcock rules.

This form of Mahjong standardized by the National Mah Jongg League and the American Mah-Jongg Association.

It uses joker tiles, the Charleston, plus melds of five or more tiles, treats bonus tiles as honors, and eschews the Chow and the notion of a standard hand.

These are just a sample of the many versions worldwide because each area of the globe has its own favorites which also includes a different set of rules.

The first Mahjong set was sold in the US by Abercrombie & Fitch in 1920. 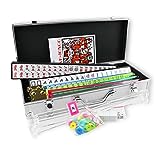 Kai Tai Inc 4 Pushers Complete American Mahjong Set in Aluminum Case, 166 Tiles(mah Jong Mah Jongg Mahjongg)
What a great American Mahjong game value! This Mahjong game set features 166 non-glaring tiles. Tile size is approximately: 1.25” x 0.9” x 0.5”. The tiles are 36 Circles - 36 Bamboos - 36 Characters - 12 Dragons (Red Green and White) - 16 Winds (North, East, South, West) - 16 Flowers - 10 Jokers - 4 Blank Spare tiles. There are 4 Jewel colored transparent plastic racks (the color combination may vary) with coin holders. There are Chips, 1 Wind indicator, and 3 dices and pushers. The aluminum case with handle features 2 felt lined tile trays. They will give your whole set the best protection for years to come. Also featured is an instruction manual that will help everybody to learn how to play if you don’t already know-how. Of all the Mahjong game sets I have looked at or played this is without a doubt one of the best values. Of course, value is like art it is in the eyes of the beholder so there may be features of this game set that are not appealing to you. However, if you are just starting out and have never played the game before this is a low-cost investment to make sure you will enjoy the game. So there you have it, low cost, loaded with features, and a solid carrying case. If you are thinking of investing in your first Mahjong game set or just getting another set then this is an excellent choice!
Buy Now

The popularity of Mahjong is still growing!