My son loves trains and loves Thomas the Tank Engine. So, this past Christmas I made the decision to purchase him a Thomas the Tank Engine train set. My older children are girls and they never had an interest in trains, so this was unfamiliar territory for me. I didn't even know where to start.

For some reason purchasing my son's first train set felt like a big thing to me. Kind of like his first step, first tooth, first date. I don't know why. That is just how I felt about it. It wasn't like a regular toy either that you just went out to the store and bought. With trains, there are different sets to chose from all with different features. To be quite honest, in the back of my mind I was thinking, "Do I really want to even start this?" Because a train set is one of those toys that can easily get out of control since there is so much you can add to your set and numerous accessories as well. And, as soon as you do all that and buy all the must have accessories, the child moves onto another favorite hobby. Been there, done that. 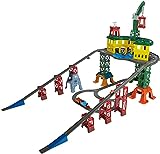 Which train set to purchase?

So, I was left with the Trackmaster Railway and the Take-Along System. I then ventured out the stores to see what they had and to take a closer look at the sets. I was disappointed to find that Toys R' Us only carried the Wooden and Take- Along sets and not the Trackmaster. And, Walmart had even less of a selection.

Anyway, at Toys R' Us I looked at the Take-Along sets. On a whim (not like me), I purchased the Take-Along Carnival Set as well as a few additional trains. What can I say, it was right in the middle of the hectic Holiday season.  I was stressed out and not thinking clearly. I was uncertain about my decision, but figured I could return it if I needed to.

When I got home, I went to Amazon to see what people were saying about this particular set and was upset to see the bad reviews on it. Oh well, that will teach me to be spontaneous! Plus, I soon realized that the Take-Along sets did not have any motorized trains. They were all hand pushed. Now, I knew that my son would spend time pushing the trains by hand around the track,(and I do love this imaginative play) but I really wanted him to have the ability to make them go by themselves as well. And, hey, I just love spending money on batteries! Who doesn't?

So, I returned the Take-Along set to the store and made the decision to get the Trackmaster Railway System. It was less expensive than the Wooden Railway and you could purchase motorized engines for it. Perfect! Now, which Trackmaster playset should I purchase?

After browing the Trackmaster train sets online, I came across the Thomas the Tank Engine Action Canyon Playset. At the time, it was ranked #50 or so in Toys & Games on Amazon and had many good reviews. Here are a sample of some of the customer testimonials:

I purchased the Trackmaster Action Canyon set which came with a Thomas motorized engine. I also purchased a set of 4 other motorized trains, Salty, Arthur, Percy and another Thomas train. When my son first saw the set, he flipped. He just loved it. It didn't take very long at all for my husband to put it together. Also, my son had a birthday this past February, so we bought him two more engines and three sets of cars/coaches/trucks.

It has now been two months since he received this train set and he still plays with it EVERY day! Now, that he has the additional cars/coaches, he is always switching cars on and off. It really keeps him very busy. There is so much going on at once.

1. It is durable. A piece here or there may need to be fixed, but most of the time my son can take care of it himself. Not a big deal.

2. It is so large that my son crawls all around it and inside it while he is playing. He loves that.

3. One important note about this set-it is HUGE! It measures about 67" long. If you are thinking of setting it up on a standard train table, that won't work. Also, it does take up quite a bit of room. Furthermore, most of the additional trains/cars/coaches come with a piece of track which we have added on to the set as well, so now our set is about 80" long! It is awesome, but very large.

4. Playset features three different ways for the trains to go. There is a switch to move the trains onto two different tracks and also the falling bridge which is really cool. All of which my son can work on his own.

5. Batteries last awhile. We just changed the batteries on the original trains this week. They lasted two months. The trains were still moving, but had slowed down a lot. The newer trains he received for his birthday that had fresh batteries kept running into the older trains that weren't moving as fast. Part of the reason the batteries may have lasted this long is because my son likes to push to trains on the track a lot and does not always use the motorized feature. So, if your child runs the trains all the time, the batteries may not last as long as ours did.

6. The trains stay on the track most of the time, however, I think my son likes it more when they crash! :)

7. As far as the set keeping a child's attention, I think it depends on the child. My son has a terrific imagination, so two months later he can still play with his set for long periods of time. He "creates "things to make tunnels over the tracks. He moves the trains over the tracks by hand choo-choo'ing and making up stories. I really feel he will be playing with this set for a long time.

8. His two sisters (mostly the 7 year old) love to play with the set, too.

9. The one Thomas train that comes with the set may not provide enough fun for your child. So, you should plan on purchasing a few more engines and some cars to add to the set like I have done. However, that is pretty normal with train sets. You start with the basic Playset and then add on.

My final thoughts: I highly recommend this train set. It is well worth the price. 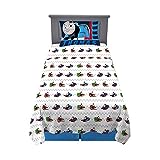 My son playing with his Thomas Action Canyon Train Set

If your child loves Thomas the Tank Engine, you may want to create a Thomas scrapbook layout or album. This page contains a large selection of Thomas scrapbooking supplies including stickers, gems, rub-ons, premade layouts, album kits, pattered paper, chipboard letters and die cuts, and much more.