The following is a list of, in my opinion, the top 3 "action/1st person shooting games" currently available for the Playstation 3 Computer Entertainment System. I've written a short review of each as well as posted links to official reviews. Also, I have included links to each game on Amazon where you can find more details or even purchase one if you wish!

As we continue well on our way into 2010, I think we all can agree that the quality of the Playstation 3 games available has increased drastically over the past couple years. The game development companies are finally beginning to reach the Playstation 3's full potential as far as graphics as well as amount of enemies on the screen. If your not a proud owner of this glorious system, now is the time. They have dropped their prices to around $350 a system which is a steal considering each Playstation 3 comes equipped with a Blue-Ray disk player, A must have for anyone with an LED, LCD, or Plasma television. If you don't yet have one, you really don't know what you're missing!

MAG is an online-only 256-player battle, in which a player will not only need individual skill, but also team work and communication in order to reign victorious on the battlefield. You start by choosing which faction you will be fighting for, either the Raven, Valor, or S.V.E.R.. After watching the recruiting videos and picking which faction to shed blood for, your ready to jump into the shadow-war head on.

As you battle to either defend you own factions turf, or gain control of another you constantly gain xp for completing objectives or eliminating enemy soldiers. This is where MAG gets very interesting. Since there are 128 players per team, they are all controlled as one based on a chain of command system, from the foot soldiers all the way up to one man at the top of each team. As you progress through the ranks, you will be given a squad of inferior players in which to issue orders to and ultimately you will be able to rank up until you're in control of the entire 128 player team. MAG is a great choice for anyone who enjoys online first person shooters.

You can find the official Mag review, along with some screen-shots, here: http://www.gamespot.com/ps3/action/mag/review.html

Also, take note that you save around 15 bucks when you purchase it from Amazon.com. 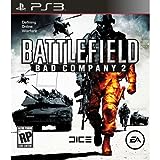 Bad Company 2 is the highly anticipated sequel to the original, and boy was it worth the wait. With a nearly 100% destructible environment you have to be on your toes at all times. Whether this means being aware that your not safe from the tank outside because your in a log cabin, or shooting a hole in the concrete wall in front of you with a rifle-mounted grenade in order to make some quick, impromptu cover. Bad Company 2 is sure to throw a thrill your way at every corner and leave you praying they make a third.

But the single player mode is only half the battle. When you're finished you get to dive into the world of Bad Company 2 multiplayer game play. Using a ranking system based on XP has become the standard for first-person multiplayer shooters these days and battlefield 2 is no different. The more you rank up the more weapons and equipment you will unlock, the better your guns get, etc. Also, the multiplayer cannot be discussed without mentioning all of the vehicles. From tiny unmanned aircrafts, to tanks, to apache helicopters, almost every war vehicle you can imagine will be center pieces in your multiplayer experience. There's even a ATV or two. Let me tell you, Calling in an attack helicopter is fun, But actually shooting the missiles is even better(MW reference).

You can read a full review of Battlefield: Bad Company 2 here: http://www.gamespot.com/xbox360/action/battlefieldbadcompany2/review.html?om_act=convert&om_clk=gsbottomnav&tag=quicklinks;reviews

Also note, you save around 8 bucks when you purchase this game at Amazon.

This game is the big dog on campus right now for all first person shooters. It has single handedly raised the bar for not only single player based gaming, but all multiplayer first person shooters tremble extra hard at its feet. I'm talking about the game that is CALL OF DUTY: MODERN WARFARE 2. If your a fan of 1st person shooters, and somehow you've missed this game, BUY IT NOW. Don't order it offline, literally get out of your chair, go to your local game store, and purchase this game!

There is really no comparison to this game anywhere on the market. Picking up right where modern warfare 1 left off, MW2 delivers the most thrilling 1st person shooter experience on the market. One minute you will be sneaking around in a blizzard silently taking out hostile enemies, and the next you will find yourself racing down a mountain on a stolen snowmobile while pursued by an horde of enemies that all want your head. There is only one word to describe this game.....INTENSE! Hands down, best 1st person shooter on the market to date.

But once again, the action doesn't stop there. It also has an unrivaled multi-player campaign. During which you work your way up through the ranks, earning new weapons, weapon attachments, perks, equipment, and camouflage. They have even added customizable kill streak rewards including: harrier strikes, stealth bombers, EMPs, AC-130s, and even a tactical nuke which ends the game with a bang(25 kills without a death)!

For a full review of Call of Duty: Modern Warfare 2 Check here: http://www.gamespot.com/ps3/action/modernwarfare2/index.html?tag=result;title;1

Also note, you save more than 10 bucks when you purchase this game from Amazon.