As a collector of Barbie Dolls and a fan of Stephenie Meyer’s Vampire Romance Series Twilight Saga how can I not love the Twilight Saga Barbie Collector Dolls Bella Swan, Edward Cullen, Jacob, Alice, Victoria, Esme, Emmett, Jasper Hale, Rosalie and Jane? These dolls are beautiful and a collectors delight. If you are a Twilight Fan or a Barbie fan, you would absolutely love these dolls inspired by the characters of the New York Times Bestselling Twilight Book Series by Stephanie Meyer and the Movie based on it. Twilight tells the Story of Romance between mortal Bella Swan and the intriguing and dazzlingly handsome Vampire, Edward Cullen. If you have liked the Twilight Novels and the Movies, then you should like these adorable dolls too!

Mattel Inc introduced the Twilight Saga Barbie Collector Doll Series officially licensed from Summit Entertainment into the market in 2009 with Bella and Edward Dolls but later added Victoria, Jacob and Alice to the Series. The latest addition to this collector series is Jane, Jasper, Rosalie, Emmett and Esme. One drawback to be pointed out is that Edward and Jacob dolls do not have bendable legs though the ladies Bella, Victoria and Alice have flexible and bendable legs. The popularity of the Twilight Series of Novels make this Dolls an instant hit in the Market for Twilight fans and want serious collectors to invest on these Barbie Dolls as the value of these dolls are likely to appreciate as a collector’s item. If you have a girl child, I am sure that she would also not be able to resist these wonderful dolls.

Why Buy Online? You can buy the Twilight Saga Barbie Collector Dolls Online from the Manufacturers Online Store (Mattel Inc) on Amazon directly at much cheaper prices than you get from outside.

Barbie Collector Twilight Saga Edward Doll is Part of the Pink Labels Collection. This doll captures the character of the broodingly handsome Vampire Edward of Twilight perfectly. Efforts have been put to make the Edward Cullen Doll more like this on screen character by matching his chiseled features, golden eyes, and shimmering complexion, to his stylish clothing from the film.

Barbie Collector Twilight Saga Bella Doll is part of the Pink Labels Collection. This doll inspired by the Blockbuster Movie Twilight looks simple and at the same time sophisticated. The Bella Doll based on the character of Bella Swan has long brunette locks and wears a stylish jeans, sneaks and a grey jacket similar to that in the film.

Barbie Collector Twilight Saga New Moon Jacob Doll belongs to the Pink Label Collection. This doll is based on the character of Jacob Black from the New Moon movie based on the Vampire Romance Series Twilight Novel. In Twilight New Moon, Stephanie Meyer introduces this handsome werewolf as a new love interest of Bella Swan after Edward Cullan leaves her. The stunning doll is created in the image of Taylor Lautner, who portrays the handsome and protective Jacob werewolf character. Shirtless, doll displays washboard abs and Quileute tattoo. Doll is wearing cutoff jeans and black sneakers. 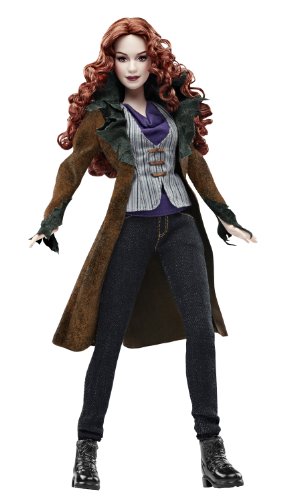 Barbie Collector Twilight Saga Eclipse Victoria Doll belongs to the Pink Label Collection. This doll is inspired by the character of Victoria from the new Twilight saga film Eclipse. Victoria who was first introduced as the antagonist in Twilight becomes the main villain in Eclipse. This doll has lustrous red curls give off the illusion of a halo of flames. Her dramatic ensemble includes a faux-leather coat, a deep violet top and striped vest, tapered denim pants and jet-black boots. 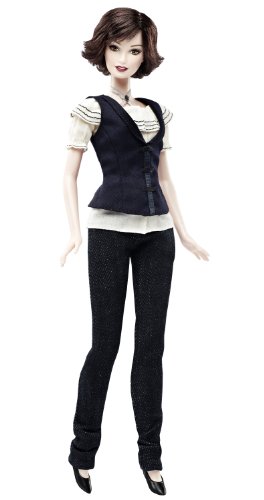 Barbie Collector Twilight Saga Eclipse Alice Doll is part of the Pink Label Collection. Alice Cullen is Edward Cullen’s sister and a close companion to Bella Swan. This fashionable Barbie Doll is inspired by the character of Alice Cullen from the Twilight book series and new movie Eclipse. Alice has delicate features, illuminating golden eyes, short and sassy dark hair and porcelain-looking skin. She accessorizes her romantic top, tailored vest and stylish pants with the Cullen family crest on her choker necklace and Black ballerina flats. 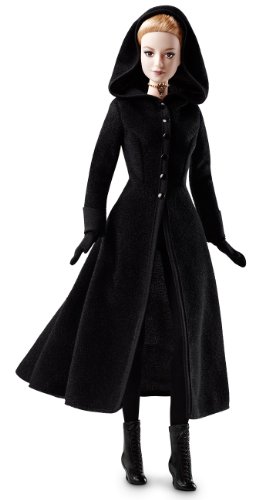 The latest addition to the Twilight Saga Barbie Dolls Collection is Jane. A part of the Volturi clan, Jane is dressed in her black cloak with hood from the third installment in the Twilight Saga, Eclipse. Jane character was portrayed by Dakota Fanning in the film. Perfect for Barbie collectors and Twilight fans alike.

So what are you waiting for? Order for Twilight Saga Barbie Collector Dolls inspired by Stephenie Meyer’s Vampire Romance Series Twilight Saga from the Mattel Amazon Store and you are sure to get a cheaper deal.