Being a seasoned veteran of all things gaming starting with super-Nintendo, He built knowledge throughout the years up to todays new tech.

Why Vampyr is a must play for all gamers

For those of you unfamiliar, Vampyr is a action-role playing game created by DONTNOD Entertainment and published by Focus Home Interactive. You play as Dr. Johnathan Reid, A surgeon and blood transfusion specialist turned vampire during the Spanish flu epidemic of 1918. Residing in London and struggling with your newfound powers of vampirism, the choices you make and the victims you choose are crucial to your play through. Although your actions on whom you choose to feed on do not directly impact Dr. Reid's ultimate story [for good reason] it greatly impacts the powers, abilities, and overall game play. As you contemplate with your own personal morals and the newly blooded vampire's, you slowly uncover an amazingly in-depth story surrounded by love, death, and betrayal. This game is a must play for any gamers who enjoy a very vast, emotional, intricate story line waiting to be explored.

Why the story steals the main role over gameplay

Although not without past faults such as level scaling and infrequent auto saves, all of which have been patched with past updates in 2018 and beyond, the main story drastically steals the show. To get more in depth without any spoilers for you newcomers, you awaken in a Victorian plague infested London, surrounded by a pit of diseased mangled bodies covered in a blanket of darkness. Immediately after awaking you find yourself with an insatiable lust for blood, forcing yourself out of the pit you can hear shouts off in the distance. These are vampire hunters, The Guard of Prewin, and they want you dead.

This is where your story begins, as a fresh young Ekon oblivious to the ways of the vampire. With your maker unaccounted for, you continue to play all the while slowly unfolding the mysteries of the vampires. Engaging in extensive conversations with citizens of London, participating in side quests, and genuine exploring, you realize much more sinister conduct is being executed behind closed curtains. Cults, factions, as well as diverse and abnormal species all play a role in the discovery of who you are and who you choose to become. I personally found myself spending hours reading everything I picked up, immersing myself into the world of factual consumed by fictional, relating many of the game moments to my real physical world. Making it the perfect blend of realism topped with fantasy.

Not only giving you a sense of empowerment over the mere mortals you choose to consume, the combat can deliver a sense of godliness. Finding yourself surrounded by a pack of Skalls can be pretty intimidating, but a quick use of the ultimate power rage makes for a fast meal of all who oppose. If your not one to use force and wish to sneak past you can go that approach as well, although lacking a sneak toggle or button you can use shadow veil, reconstructing into a darkened shadow only to walk past your enemies or surprise them with a sneak attack.

The overall combat is that of Bloodborne, or The Dark Souls series, relying on dodges waiting for your moment to strike. It can feel a bit daunting at times when engaging in combat with higher creatures such as werewolves, other Ekons, and the bosses. Even as moments of game play can feel so rewarding, giving you that sense of entitlement, the story triumphs and takes the lead, Giving you a "lets just get this over with and get on with the story," kind of feeling.

The RPG mechanics are top notch, with conversations leading to explore-able mysteries as well as discovering new ways to raise the NPCs overall blood quality leading to more XP from consummation. Healing the citizens of any ailments they may have is a quick way for a massive XP boost, whereas learning about that particular characters past and unlocking hints for further dialogue is just as essential to max out the meter. Using these XP points you can purchase new powers, abilities, as well as passive skills depending upon your play style.

When it comes down to character customization not much can be achieved other than the purchase of a DLC adding a new outfit, firearm, and sword. The eyes of Dr. Reid do change as your powers grow but that's about as far as it reaches. All in all the gameplay does have its moments, nevertheless the lore and Dr. Reid's personal struggles steals the spotlight.

Why will it be a success?

The release date for DONTNOD's Vampyr hit the shelves June 5th 2018. While most consider 1 million copies sold to be commercial success, Vampyr sold 450,000 copies even with mixed reviews while reaching the 1 million profitable mark in April 2019, bringing both DONTNOD as well as Focus Home Interactive to merge together once again.

Noting that a second title was not officially confirmed but heavily implied, the deep narrative and memorable characters caught the attention of Fox 21, the studio that brought you titles such as the hit series Sons Of Anarchy and Homeland. Furthermore transforming the title into a TV series you will ultimately end with the well-knit Vampyr story without any of the heavily criticized game-play, therefore fashioning the franchise into a force to be reckoned with. 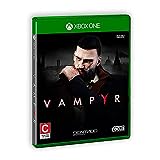