You Know You're A Gamer When...

1) You are deathly suspicious of anyone who offers you cake.

2) You have a detailed zombie apocalypse survival plan.

3) You've been known to answer to your gamertag.

4) You know more about the people you game with than your neighbors.

5) You just remembered you had neighbors.

9) You envy anyone with a lower ping than you.

11) You believe a meal consisting of beef jerky and energy drinks is a completely acceptable and balanced meal.

12) Your worst nightmares have involved the red ring of death.

13) You know what happens if you craft a stick and a lump of coal together.

14) You are curiously entertained by the joyful cheering and colorful confetti that is released after shooting a grunt in the head.

15) You own Super Mario Brothers and a Super Nintendo to play it on.

16) When you hear the word "camper", your first thought is not of a tent and campfire.

19) When out in public and you see someone get hit in the head by something, your first instinct is to yell "Boom, head-shot!"

20) You can name every type of assault weapon but have never actually held one.

21) You have taken an arrow to the knee.

22) You own/want an Alienware computer.

25) You reward yourself for everyday accomplishments with your own personal achievements. "I only hit the snooze button twice this morning?! Achievement unlocked!" 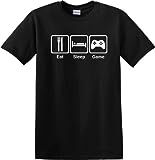