What is Angry Birds?

Angry Birds is an online game that has staying power.

You control a series of birds who are trying to protect their eggs from some villainous pigs.

They do this by launching themselves at the pigs using a giant slingshot!

My oldest son started playing it when he was just 3 years old, and once he stopped throwing the birds backward he got pretty good at it.

With the app and all its sequels still being downloaded and played like crazy, it should come as no surprise that they started creating and selling toys featuring the famous and fabulous Angry Birds and their arch enemies, the Bad Piggies.

When Angry Birds toys came on the market, game playing kids everywhere just HAD to have them.

My son, who never really asks for many toys, saw a commercial for the Angry Birds Pirate Pig Attack Game and decided that he HAD to have that game. Every time he saw a commercial for it he said he needed it. Finally, we asked him what he wanted Santa to bring him for Christmas and he said, "Pirate Piggies."

Santa, being the obliging fellow that he is, did indeed bring him his Pirate Piggies.

What is your favorite version of Angry Birds to play?

I wanted to share some pictures of my son playing with his Angry Birds Jenga Pirate Pig Attack game, but he has become 100% against having his picture taken.

Instead of photos, how about these lovely youtube videos talking about the product.  Because everyone loves youtube.

This commercial doesn't show the real game at all, but isn't it a cute commercial anyway. I can see how it would appeal to children and get them to ask for this toy.

The game includes a pirate ship base, with several Jenga like pieces. You arrange the pieces on the base, much like the buildings the piggies sit on in the Angry Birds games. The game also comes with 4 Bad Piggie Pirates to set up among the blocks.

Like the app, you are launching the bird at the pigs and trying to knock them all down. Unlike the classic game, the bird (or King Pig if you prefer) are in cars. I'm not sure what cars have to do with Pirate Pigs, but that is what it is.

You WIN by knocking down all of the pigs. Unless you are my son and then you win by making the biggest mess you can out of the pieces of the pirate ship.

We only had one real problem with the game. The base of the ship will NOT stay together. I understand that the whole point of the game is to knock the ship down, but you don't get a chance to knock it down if the ship falls apart before you even finish building it. It was hard enough for my husband and I, and pretty much impossible for our son.

After a few frustrating tries, we finally pulled out some packing tape and taped the base together. Now it's a little easier to get the ship and pigs set up to knock them down, but its still only temporary and he can pull it apart when he gets older if he wants to.

If you want a kids point of view on the game, here is a kid reviewing the game. (Not my son.)

The Force is Strong with Angry Birds

In addition to Angry Birds, my son is a fan of Star Wars.  So it really wasn't much of a surprise when he saw another Angry Birds Jenga game he wanted.

This one did not have any Pirate Piggies, but it was shaped like a giant Darth Vader mask.  Assuming, of course, that Darth Vader was a Bad Piggy.

This one was a little better because it helps you set the board up without everything tumbling down on you.

Also, it comes with a more classic slingshot type of launcher instead of cars and a ramp. 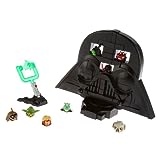 Star Wars Angry Birds Jenga Rise of Darth Vader Stacking Game
If the Bad Piggies were from a "Galaxy far, far away....." then they would certainly have been working for Darth Vader.
Buy Now