The characters of Beatrix Potter are loved all over the world. Peter Rabbit is often one of the first stories children are read and Beatrix Potter inspired gifts are very popular for new babies and for Christening gifts. Here we have brought together a great selection of Beatrix Potter gifts and collectibles, suitable for children and adults alike. Many a new baby gift will become a collectors item before long and there is also a huge choice here for avid Beatrix Potter fans of all ages. Scroll through to enjoy our choices and to learn more about Beatrix Potter and her characters. 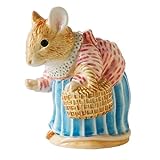 Figurines are one of the most popular collectors items today. One of the most popular companies to produce Beatrix Potter figures is the John Beswick Studios. John Beswick acquired the rights to reproduce the characters in 1948 and produced 10 figures. Royal Doulton took over the company in 1969. Many of the Beswick and Royal Doulton Beatrix Potter figures have been retired - there are a sure sign that they will become more valuable as time goes on. There are something like 60 retired figures for collectors to search for.

Porcelain plates, bowls and cups featuring Beatrix Potter characters are popular gifts for children and if looked after they are the antiques of the future.

Beatrix Potter is one of children's literature's most famous and beloved authors and illustrators. Her creation of Peter Rabbit and depiction of other woodland creatures has captured the imaginations of millions of children since she first began to publish her work in 1902. Today, her books and merchandise based on her characters have become collectible to young and old alike.

As the oldest licensed character, Peter Rabbit is a collectible classic. In 1903, this adorable rabbit with his telltale blue coat was patented, making him the first soft toy to have a patent. Today, Peter Rabbit is collected in the books he appears in, in print and poster form suitable for framing, in wallpaper, on fabric, and in toy form. He also appears on porcelain tea sets. Vintage examples of Peter Rabbit, such as the stuffed toy created by the Steiff Company between 1904 and 1906 fetch large sums at auction and are particularly prized by collectors. Potter herself created a Peter Rabbit soft toy when she first began to write about him.

But there are actually hundreds of toys and items based on Potter's lovable cast of characters. Tom Kitten, Jemima Puddleduck, and Benjamin Bunny are also famous Potter creations. From board games to puddles, these animal characters are widely featured on items both new and old. Even Barbie appears in Potter-inspired fabric alongside a copy of Peter Rabbit in a package marketed in the 1990s. Other collectible Potter items include calendars, tins, and even bottles of bubble bath.

First editions of Potter's books are extremely collectible and, perhaps, most valuable of all the merchandise associated with her characters. Potter published more than twenty-three books featuring her legendary characters and their charming tales. Of course, original artworks and illustrations created by Potter are also exceptionally valuable and collectible.

While children continue to adore Peter Rabbit and Potter's other familiar characters, adults also prize Peter and his friends. In fact, many items like porcelain figures are marketed to adults. Peter Rabbit displays make charming dcor for nurseries and young children's rooms, but some valuable items might be better stored in glass cabinets.

Today, it is possible to find vintage Potter collectibles at online auction sites like eBay. Contemporary items featuring Peter Rabbit and other characters are widely available at places like book stores, department stores, and online stores. Whether you enjoy Peter Rabbit in books or on bedding and clothing, it's best to keep items clean and damage-free; they only continue to grow more collectible and beloved by a myriad of collectors. 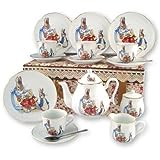 Beatrix Potter Large Tea Set in Case
Beatrix Potter teasets are among the most popular collectors items. This handmade porcelain set comprises of 4 plates, 4 cups and saucers, 1 teapot, 1 milk/cream jug, 1 sugar bowl and 4 spoons are presented in a delightful fabric hamper. Potter fans from 5 to 95 will love this set and they are all completely dishwasher safe.
Buy Now 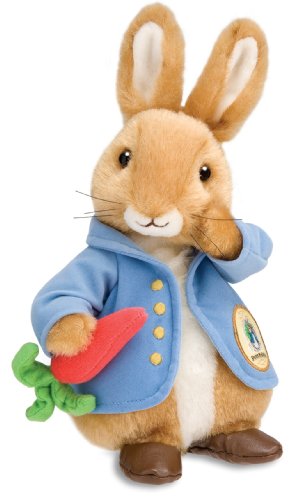 Beatrix Potter Collectible Peter Rabbit
Peter Rabbit is the best known of Beatrix Potter's characters. This new plush toy depicts Peter at his most familiar with his blue jacket and he has a carrot to munch - I wonder if it came from Mr McGregor's garden? This toy is eleven inches tall and comes with a presentation/display box that is perfect for collectors. If you are a collector remember to keep the box - toys with their original box become much more valuable.
Buy Now 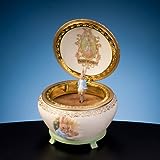 Encore! Peter Rabbit Hinged Trinket Box
This pretty little trinket box has a hinged lid that opens to reveal a rotating Peter Rabbit. It has an 18 note musical movement playing Beethoven's Fur Elise" (English: "For Elise"). Beautifully made, this box is something to cherish. Ideal gift idea for Beatrix Potter or Peter Rabbit fans.
Buy Now

Trinket boxes make excellent collectors items. They are usually quite small and affordable and are great fun to search for both old and new ones. Mostly they are very decorative, and if we are honest, more prized for their decorative potential than their practical one. Trinket boxes make lovely displays and these Beatrix Potter ones can only enhance your collection.