Our Journey with Harry Potter

Began a long time ago.

At the beginning of this journey, I remember searching for the best Harry Potter gifts for my sons and discovering that there was little to no choice of great gift ideas for Harry Potter fans. However, that is certainly NOT the case anymore. From the obvious choices of Harry Potter books and movies to the not so obvious items like the collectible wands by the Noble Collection and the Wizarding World of Harry Potter; to fantastic decorative accessories for your home; to the Unofficial Harry Potter cookbook and a Harry Potter knitting book; to a plethora of fun Harry Potter games, there is no shortage of gift choices that are perfect for individuals who love Harry Potter's world.

On this page, you will find an introduction to some of the BEST HARRY POTTER GIFTS available online along with links so that you can order yours NOW before that next birthday or Christmas gift is required.

Buy Your Very Own Sorting Hat

Of course, if you're a Harry Potter fan you already know the huge significance of the sorting hat, as shown above for when you arrive at Hogwarts, it is the sorting hat that sorts the new students into one of the four 'houses' at Hogwarts -- Gryffindor, Hufflepuff, Ravenclaw and Slytherin. Harry Potter, by the way, was sorted into Gryffindor.

Which house will the sorting hat put you into? 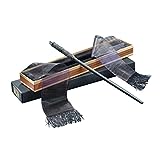 The Wizarding World of Harry Potter wands have turned out to be quite popular, too. From the first ones issued at the grand opening of WWOHP at Universal Studios in Florida, which can sell for more than $200, to the ones sold in Ollivander's Wand shop, there is a wand available and waiting to pick you. However, if you cannot make it to the wand shop in Florida, you can pick your own wand from the Wizarding World from the sellers on eBay.

A friend once said, Fluffy, the three-headed dog, is three times the fun! How true!  If you or someone you know loves Fluffy, there is a wide choice of Fluffy merchandise available, too.  You will find some pretty amazing plush Fluffy's from companies like FAO Schwarz and Gund.  You will also find movie gift sets bundled with a Fluffy action figure, a ferocious figure made by the Noble Collection and a Harry Potter Fluffy Christmas ornament from Hallmark.

Here's a cookbook that Harry Potter fans who like to cook will be excited about.

With this cookbook, you will be able to try them all.

Buy Your Copy Of The Unofficial Harry Potter Cookbook From Amazon

There are quite a few Harry Potter games available, although some of them are proving harder and harder to find. Naturally, I have not played them all but I am able to strongly recommend Harry Potter Clue and Harry Potter and The Chamber of Secrets Trivia Game with the second game being more appropriate for people who really do know their Harry Potter trivia.

Harry Potter Clue really is a great game adding, as it does, a new dimension to the typical Harry Potter game. The added twist is that you start the game with a certain number of house points and you can lose the game by running out of house points...even before the mystery is solved!

Harry Potter and the Chamber of Secrets Trivia Game is more complicated than a normal trivia game because you use the answering of questions to play the Harry Potter game of Quidditch. Younger players may find adding this extra level a bit complicating and, as with all trivia games, this game is best played by people who know there facts!

I discovered a full line of Harry Potter t-shirts, including this t-shirt for Harry Potter and the Deathly Hallows, online at Zazzle. On Zazzle's website, you can choose from a variety of styles, colors and sizes of t-shirts for men, women and children. Visit Zazzle's Harry Potter t-shirt store by clicking right here.

If you order your t-shirt right now, you will be able to wear it to the opening of Harry Potter and the Deathly Hallows in November, 2010.

Harry Potter remote control wand is perhaps the most exciting new Harry Potter gift idea I have seen. It features advanced technology, the same as that found in any universal remote control, which allows you to turn on and off and adjust various electronic devices in your house at the flick of a switch...ah, no, that should be at the flick of your wand! No wizard or magic fan should be without this wonderful wizarding tool!

Harry Potter Years 1-7 Part 1 Gift Set
This Harry Potter blu-ray boxed set includes all of the Harry Potter movies to date. That is, movies 1 to 7 Part 1. A nice bonus is that they are on sale for almost half price at Amazon and they ship for FREE.
Buy Now

Of course, I should not forget the movies for they would make a marvelous gift idea for any Harry Potter fan, new and old. Fans who already own the movies might even be interested in upgrading their collection to blu-ray disc.

Are you looking for some of the best Harry Potter gift ideas, too?