8 Good and Funny Adult Party Board Games in 2017

A good party board game is one that can appeal to both casual gamers and serious gamers alike. It also needs to keep the attention of everyone at your party. Since this is not always an easy task, I thought I'd put together this list so you can be sure to have a great game at your party!

Picture: A few of our most used board games!

This hilarious board game can be as innocent or dirty as your party wants to take it. The 2000 phrases in this game are designed to make you laugh and cry. It's easy to learn.

Rules for Boxers or Briefs:

One person is put in the hot seat and others must use a phrase to describe them according what the person would think was funny or serious. Then, the person reads out loud each of these statements that others think about them and is forced to think of one that is accurate and one that is funny.

An Accurate way for me to describe this game would be the "adult" version of "Apples to Apples". The replay-ability of this game is endless if you switch up who is at your party from time to time. It's also my favorite to play for my family's yearly white elephant gift exchange.

Picture: As you can see our boxers or briefs game has quite a bit of wear. We use it all the time. 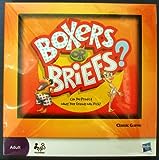 This self-proclaimed party game for horrible people is clearly fun with the right kind of people around. I will warn you though, once you start to play it you might learn words you'll wish that you could have forgotten.

Still, it's the kind of temptation that we all love to hate and has made me laugh so hard that I've cried on several occasions. It's politically incorrect, a little twisted, and tons of fun for those willing to take a joke.

You might not have heard about this great game but it's a "hoot" literally! Mattel earned party of the year award in 2006! You might be asking why I called it the best "new" party game and here we are in 2013. I did this because most of my friends have still not heard of it. Board games tend to take a few years to get around.

On the surface you might be misled into thinking that this is a game for kids, after all it does include various barn animals and requires you to make barn animal sounds, but this is the perfect party game for adults.

Each person draws a barn animal out of the black bag. You then go around clockwise and ask each person which sound they are going to use for their barn animal. This could literally be as simple as a house rule that it must be the "exact" animal sound or a general rule where you can use anything for your animal's sound! For example, one time one of our guests used "point" for his dog's animal sound. (It resembled the sound the dog made on the movie up.) After everyone has their sounds the animals go in the barn and everyone is left trying to remember what each other's sounds are. Taking turns clockwise, cards are drawn and when two people have a match the race is on to see who can remember the other person's sound first. The best part is the game and action continues while they are making their barn animal sounds.

This hilarious game from University Games allows everyone to burst out and yell the answer even when it's not your turn. Although the manufacturer recommendation is for ages 12+ I would recommend that players be 16-18 years old if you want them to really understand the game. Cards come in who,what and where am I categories with each card having ten clues that each person is trying to figure out the correct answer to. Whoever yells out the answer first moves closer to being the winner and the "smart ass".

This game is from North Star, the same people who made the most awarded party game of all time, "Wits and Wagers". I would highly recommend players be ages 14+ to play. After drawing a card, the person whose turn it is asks a question from that cards.

Players "say anything" in response to the question, and then then everyone decides what they think that the person would choose. Examples of questions could be "if you could have a big anything what would it be" or "What is the best movie of all time".

#6 A Great Family Party Board Game - Apples to Apples

This game is great for the whole family. Like a lot of other party games a person is selected who chooses a subject card and based on that players personality players choose which card from their hand they think that the player would choose.

Depending on their personality they may choose a serious, funny, or just plane stupid card out of the cards that players lay down.

This is an easy-to-learn great party game for the family. Although the recommended age is 12+ my younger niece played this with us and had no problem. The greatness of this party game lies in it's simplicity and in the option to write anyone's name into the circle. If you want a game where there is really no "learning curve", then this would be perfect for you.

Write down the names of people that you want to be included in the game. This could range from anything like Barrack Obama to people at your party. Pick a card - read aloud for example, Imaginiff ___ (so and so) were a type of bad habit. Then players would choose between 6 choices for bad habits of what that person is more like. would they be a " Nose Picker", "Fingernail Biter", etc... and the majority wins.

Farkel is fun because its educational and something that everyone in the family can play. You basically roll the dice to get points, but if you roll no points you lose what you have. It gets pretty intense when you've rolled a lot of points and I've blown it on more than one occasion. 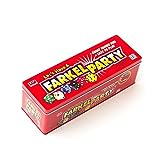 What's Your Favorite Party Board Game?

Have something to say? Participate in our party board game discussion below!

Vote for your favorite!

I hope you've enjoyed my lens on the best party board games for adults. If you have, then please leave a comment below. As I'll be updating this lens from time to time, please leave any comments on other games that you would like featured here as well.

What's Board Games do You Play at Parties?