Tested and true: Brio toy train tracks are the best train toys for kids age 3 to 8 years old. Who says so? My 4 years old son! Brio toy train tracks allow kids to build simple or complicated railways, completed with an assortment of buildings, vehicles and engines wagons. Many other brands of toy trains are compatible with Brio too. Many famous Tv characters have their own Brio compatible train sets: Thomas the Tank Engine, Melissa and Doug, Bob the Builder, Disney's and more. Brio is really an open ended play system. The only limit with Brio train sets? your kid's imagination!

Brio Metro Railway Set - Toy of the Year 2011 in Sweden, Finland and Germany

As you know, I never ever willingly buy toys made in China (unless they are offer to me as a gift). Brio is my only exception. Designed in Sweden, Made in China. So why do I still buy them? Main reason: it's wood toy tracks with no finishing on them (so no risk of toxic material). The rest of the Brio line is plastic. They do follow an environmental policy as well as a code of conduct. 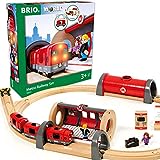 My Son's Brio Railway - It looks different every day, that's what is fun with these Brio train tracks

We started with a starter sets of tracks, 1 character, some horses and trees, 1 battery operated locomotive with 2 wagons. This was for Christmas when he was 2 and half years. Then we added a simple bridge and over time more elements. Now 2 years later he has a nice set and lots of possibilities. 4 years old kids should be able to make basic circuits without the help of an adult. The tracks are easy to put together, and very easy to remove as well.

These 5 sets are in my son's Brio collection 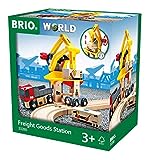 BRIO World - 33280 Freight Goods Station | Toy Train Accessories for Kids Age 3 and Up
My son's favorite Brio piece (it's really a nice one) because he got to choose it last spring when he finally gave over his pacifier. This element comes with 1 truck, 1 wagon, 2 loads and 1 ramp track for the truck. It's a great action element. Back off the truck up the ramp, pick up one load from the wagon (waiting under the station). Drop it on the chute and use the button to slide it down into the truck! And off it goes.
Buy Now

My son likes his Brio train tracks set but he also like his dinosaurs collection....so we turn all this into a scene from Jurassic Park where the dinosaurs get loose and eat the tourists. Don't worry, my 4 years old haven't seen the movie, but he can make the difference between herbivorous and carnivorous dinosaurs (although in this picture it's not that clear!).

Even poor Bob the Builder is getting eaten!

He also use his Brio train tracks with Lego and Duplo. He build houses and bridges and whatnot. There is no limit with these train sets, kids can incorporate almost all their other toys in a way or another.

If so, I suggest you buy a set instead of single elements. That way he can start playing right now with a decent railway. Here are a few suggestion that includes tracks as well as wagons:

BRIO World 33028 - Classic Figure 8 Set - 22 Piece Wood Toy Train Set with Accessories and Wooden Tracks for Kids Age 2 and Up
Good Brio starter set, especially if it's for a kid under 4 years old. This is an easy set to assemble and after a few practice they will be able to do it all by themselves. It comes with 2 wagons and a locomotive, a little bridge, a station and some trees.
Buy Now

Check eBay for great bargain on second hand Brio. Many parents sell Brio parts and tracks in lots on ebay. It's a good way to get extra tracks cheaper.