I am a big fan of boardgames, especially larger strategic boardgames. I have played a lot of them and are still trying new games.

Codenames is a game for four to eight players. Strictly speaking, you can play with more than eight, but less than four is not possible. The players are divided in two teams. Team Red and Team Blue. From the deck of cards 25 cards are randomly selected and placed on the table in a five by five grid, such that everyone can see all the cards. There are a lot of cards in the deck and they are double-sided, so you will never play the same game twice. Each team chooses one player to be the describer. The other players will try to guess the words that are being described.

The Cards with Words

All cards on the table contain one word. This can be anything. For example one card can contain the word "cow", while another can be "fridge" or "tennis". At first sight the words don't link in any way to each other. The describers get a different card that shows the five by five grid. On this card every space has a color. Red spaces correspond to words of the Team Red. Blue spaces correspond to words of Team Blue. Then there are yellow spaces. These words are neutral. Finally there is one black spot. If a team guesses this word it will result in an immediate loss. An example on how the grid could look like is shown in the table.

An Example of How a Grid Could Look Like

One player of every team is going to describe the words. In his turn, the describer may give one hint. This hint may only consist of one word, but it can correspond to multiple words on the grid. After he gives the hint he says a number. This is the number of words he means to describe with this hint. For example, a player can give the hint "animal three". This mean that he describes three cards with the word animal. A describer cannot say one of his words or a part of one of his words literally.

After a description and the corresponding number is given by the describer, the other players may discuss which words they think the describer means with his hint. Then they may point on the words they want to guess one by one. After they guess the describer puts a card matching the color of the word onto the card. If they guess a word correctly they can continue, otherwise their turn ends. They can guess as many times as the number the describer said plus one. This plus one is given to make up for any mistakes made in earlier rounds.

How to Determine the Winner of Codenames?

The winning team is the team that has all their words guessed correctly. They don't necessarily have to guess them themselves. If the opposing team guesses the final word of a team, the team still wins. To make it fair, the team that starts with describing has to guess one word extra.

Another way a team can win is if the opposing team guesses the black word, since guessing the black word results in an immediate loss.

Skills and Strategy in Codenames

It is important that the describer gives clear descriptions. The worst thing he can do is give a description which his team mates link to a word of the opponents, or even worse: the black word. It is better to give a clear hint for only three words then giving a vague hint for four. How much risk you want to take as describer depends on the situation. If you are behind you probably want to take a little risk to close the gap, but if the opponents made an early mistake you can better play safe and make sure you give an easy hint for only two or three words.

The most important thing for the guessing players is that the point the cards in order of certainty. Point first at the word you are most certain about to give yourself the best chance of being allowed to continue guessing. Furthermore, pay attention to the descriptions of the opponents, so you don't point to words you think are theirs.

Why Codenames is a Great Game

Codenames is ranked 75 on the board game rankings of Boardgamegeek, which is second as we count only party games. It is quick, since every round takes only around fifteen minutes. Therefore, you can play multiple times such that everyone can describe at least once. But you can also play just one or two rounds if you have very little time. It takes almost no time to explain and the setup time is also very short. The game is easy, but still requires some strategy and logical thinking. Therefore it is a great party game.

Besides the original game, there are a lot of variants. For example, there is a variant with pictures instead of words, or a Harry Potter themed variant. All variants are:

What Do You Think of Codenames? 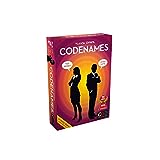 Other Recommended Board Games