If you have kids aged 3-9 then you need a few of these toys...boys & girls will both love this super action packed play sets & figures that will make their imagination run wild with super villains, action heroes & elaborate action scenes.

Ideally to get started on this line of toys you would want one of the sets plus a few extra figures, a vehicle & maybe a good villain in there so your kids can properly fight the evil bad guys. The quality is outstanding & our tough kids haven't broken any parts in 2 years of play.

You can never have enough Batman figures! This guy comes in the classic blue Batman color scheme with a glider backpack attachment, & retractable grappling hook This one is great with the play sets because it can zip up the structures...however it makes a fun stand alone toy as well.

No kid can resits the Jokers Playhouse! The color scheme is ridiculous & it has tons of moving parts with hidden features. The Jokers mouth opens up there is a jail cel, an opening garage door & the Joker's hands & eyes move when he laughs. All in all this is a great addition to the Batman series...it's nice to have a place for the bad guys to hang out.

If your just getting started on this series you should get the Batcave first, it's larger & this is more of an add on to the other Batman play sets.

This play Set is perfect for die hard fans...it's a mini Gotham city! It's features include a working elevator, a bank with a door that joker can blast thru, a joker proof jail cel, launcher, flip out steps & more. It's a great interactive toy for kids that love super heroes! You also get a gold pile, Batman & Joker figures plus 2 rockets to launch.

If you need a simple batman toy for the kids this one is pretty awesome. it features an all black Batman with black & white motorcycle with logo wheels. Any of the DC Super Friends can ride the motorcycle so it's great for adding to a larger collection.

This tricky Batcave features 5 separate points to put a character in & make the cave interactive plus a launcher, working telescope, motorcycle & figures...blue Batman & standard Robin. I highly recommend this as the first set you buy...if your kids like it then expand with other sets & accessories. It's pretty much ready to go out of the box, just do 2 things & it's fully working, you will need 2 AAA batteries but other than that just add some kids & your set!

The penguin is a classic bad guy & your kids will have a blast defeating him in this evil penguin sub! The feet of the sub kick as the kids push it along the floor, & the mouth opens to shoot purple discs! All in all this is the perfect addition to the set.

Ok, This one is really cool, the colors are just remarkable & just beg for kids to play with it. It's a larger vehicle & comes with a joker figure. The glove actually shoots & it has a good rolling action (according to the kids). This is a great addition to the toy box!

If you get a bigger set you absolutely need extra figures...especially if you have more than one kid. We have about 20 figures & that seems to works for several kids playing at one time. We also have 3 of the large play sets & 6 of the smaller vehicles. It's by far the best toy series we've tried & I love the fact that it's gadget free. 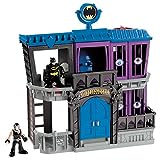 Gotham is over run with bad guys! Your kids will need a place for them to go once they are caught. This max security Jail play set is perfect for any Batman fan. It includes a Bain figure & has 5 cells...one of which Bain can break out of (so don't put him in there!), it has a Bat Signal & with sets like these you kids can make up tons of different adventures!

If you looking for just a one off toy in this collection This one is great, it's motorized & quite large for just a vehicle.Your kids simply push a button & the car zips off about 3 feet then shoot a flying disc. It's Really popular around here & the batteries last for about 9 months so it's not a hassle. It also make groovy sounds that you'd expect from something like this...they are in no way too loud Or annoying so it's a good thing.

This Batcave is a classic! It has tons of interactive features that will keep the kids busy & imaginations in overdrive for hours! It comes with batman & Robin figures plus has a rocket launcher & small motorcycle that all the characters can ride on. It has lots of move parts & no batteries so it's all kid driven! 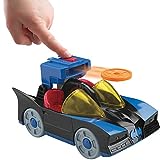 Nothing is cooler than the Batmobile! This one comes with a Batman figure & 2 discs that the car can shoot 9they match the other discs in the set). The Car has lights that pop on with the push of a button. Kids seems super stoked that 2 "guys" can fit into this car...which is a good plus.

Yet another Batcave? Yep, Bruce Wayne was loaded after all & I'm sure he had several of these! Your kids will go nuts with a working drawbridge a grappling hook that can be shot out, a door that the bat cycle can fly out of & tons of other fun features. This set is a little bigger but that just means more choices in what to do!

Wait...Green Lantern isn't part of batmen?! Yeah, well turns out kids aren't purists when it comes to these things. It's a cool green playset & a whole new set of cool guys...that is all they need! This works just like the batman sets & all the figures are interchangeable. It's bright green with lots of moving parts & a glowing light that can move around. Plus it's super tough & after 2 years ours is still in one piece.

Ok, no kid can resist hooking up superman & Batman against the bad guys...this set is also a must have, it's small but a perfect addition to the set. it comes with Superman & a General Zod action figure & is compatible with all the other figures & pieces in the collection. It features a launcher, jail cell & lots of interactive parts that your kids will love!