Fun Things To Do with Straws

Simple Drinking Straws Can Be Part Of Fun Activities

Straws are typically cheap to buy so whether you're having a birthday party for kids or doing a rainy day craft, there are actually many things you can use them for. On this site I'll give you some game ideas to use straws with. Great for something different at a birthday party. Also some craft ideas, a brief history of how straws came to life, some nostalgic straws, and display straws for different occasion. I bet you didn't know that there was this much to discuss about straws. :)

Games to play with straws

Suck it Up (As Seen on Minute to Win It)

A light object is blown through an obstacle course with a straw.

One person from the team sits in a chair wearing goggles or glasses. The other team members stand behind the line and take turns trying to blow the paper into the person's hair (the one sitting). You take a straw that has it's paper covering, open it on one end, pull the paper off enough so when you blow into the straw it will fly through the air. The team that gets the most paper wrappings to stick to in the person's hair wins (so use someone with long or puffy hair)

Crafts - Many sites already exist on the different crafts you can make with straws. Here are a few

Historians believe that Sumerians once used straws for drinking beer ( probably to avoid the solid byproducts of fermentation that sink to the bottom). The oldest drinking straw in existence, found in a Sumerian tomb dated 3,000 B.C., was a gold tube inlaid with the precious blue stone lapis lazuli. (as cited in the book "The Amazing History and the Strange Invention of the Bendy Straw", Derek Thompson, The Atlantic, November 22, 2011.)

I found out that in the 1800s the rye grass straw came into fashion because it was cheap and soft, but it had an unfortunate tendency to turn to mush in liquid.

I thought it was interesting that in 1888, Marvin Stone patented the spiral winding process to manufacture the first modern day paper drinking straws. He had already been making paper cigarette holders, so he wanted to try the paper in a straw form. By 1890 his factory was making more drinking straws than cigarette holders. Hey something good did come from cigarettes. What's also interesting is the spiral winding process also was later used to produce spiral wound tubes in the first mass produced radios.

In 1938 Joseph B. Friedman invented the plastic flexible straw. He is said to have been inspired by the idea after watching his daughter struggle with a non flexible straw. The flexible plastic straw was marketed to hospitals and was on the market by 1947. The flexible bendy straw could be used for hot and cold liquids.

(photo collage: made from Amazon products form their website)

For more information on the history of straws check out these links:

Types Of Neat Straws You Can Buy - Remember those crazy straws?

The spiral straw that makes drinking fun? This item is still around after 50 years and operated by Fun-Time International Inc. the designer and manufacturer of Krazy StrawsÂ® and Krazy StrawÂ® Drinkware. The are a family owned business based in Olde City Philadelphia, with a factory in the USA.

As the story has it Krazy Straws came into existence when a glass blower discovered a discarded twisted tube. He showed it to his children, whose friends also wanted their own once they saw it could be used as a straw. And the rest is history.

The great spoon straw used for slushy drinks, smoothies, shakes, and other ice cream treats. These are perfect for eating with and then sipping up the liquid once the treat begins to melt. The oldest patent I could find was issued in 1901 by Peter Marx (patent number 674446).

Why Not Right? No waste, you just eat it when you're done using it. Edible straws have been made out of candy, licorice, pressed fruit, and ice. 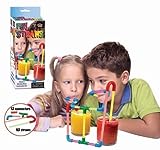