The Disney Animators Collection has moved from the Disney Princesses to It's a Small World. These It's a Small World Animators Dolls are based on the characters and music that is exhibited in the iconic ride in Fantasy Land at Disney Parks. Parents of small children will be familiar with the boat ride that takes you on a journey throughout the world where you are greeted with dolls singing It's a Small World in various languages.

The ride is one of my five year old niece's favorite rides at the Park. If you have been on the ride at least one time (I have been countless times) you will not escape without getting that song stuck in your head. Hearing the song reminds you instantly of Disney and your family vacation. The song has the power to invoke fond memories and acts as a gateway for children to learn about the world and different cultures. Because these dolls represent an iconic symbol these musical toys are sure to be a hit among both young and old.

Each of the dolls represent a different country.or origin. Each doll plays It's a Small World in their country's native language and English. To hear these dolls sing you push a button on their stomach. There is also an on and off button for you to use located on the doll's side. The on/off button allows you to save battery power when the doll is displayed and not in use.

Currently there are seven Animators dolls from seven countries. These include: Hawaii (US), Holland, India, France, England, Japan and Kenya. I wish they made one to represent my country of origin Canada, but it's not surprising they chose other countries especially when you consider the almost non-existent representation of Canada in the theme park ride. I think we got a Mountie near the end of the ride in the California park.

One of the main features of these dolls is that they have rooted hair and eyelashes. Each doll is dressed in traditional folk costume. The design for the dolls were based on Mary Blair, Disney Studios artist, illustrations. The recorded music that the dolls' play is recorded by children from around the world. This gives the music a more authentic vibe.

If you collector dolls you will be happy to note that these beauties come in a collector's display box so you can display your doll easily without having to take it out of the box.

Each dolls costume is elaborate. For example, the doll representing India, is dressed in a beautiful pink dress with a pink overlay, turned up shoes and veil which is very different any other doll in the collection.

Do your prefer the Disney Princess Animators dolls or the Small World dolls?

Every doll is unique and represents their region of the World. It's hard if not impossible to choose just one of these 16 inch cuties. The best thing about each doll is the detail that the makers put into them from costume design to facial expressions. 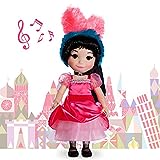 Disney It's a Small World Doll, France
When the Disney France Small World doll sings you are treated to It's a Small World in both English and French. While I love the dress this doll is sporting the feather hat really steals the show. It gives this French doll a flair of whimsy. Don't you think?
Buy Now

What is your experience with the It's a Small World Animators Collection?