What's the function of Barbie -- besides old-fashioned play? Does Barbie allow us to see ourselves, and what we can aspire to be, or what we could never be (and should never want)? The question isn't that simple, because Barbie herself comes in so many forms.

Recently, I've come across photos of women from around the world, beaming out at the camera with Barbie-type dolls (not necessarily true Mattel Barbies) in hand. What does that doll represent to them?

I've also come across some Barbies that are very different from the ones I grew up with: different in their facial features and/ or body type, not just coloring. There have always been anti-Barbies, deliberately seeking to challenge Barbie stereotypes and foster different ideals in young girls. But as the debates rage on, Barbie herself steps out of the mold.

Here are some of the most intriguing fashion dolls I've come across, and also some notes about fair trade doll clothing and about using Barbie to role play diversity issues. Surprisingly, some of the more realistic dolls are a part of Mattel's Barbie line.

Barbie "So in Style"

Barbie "So in Style" dolls are different than traditional black play Barbies. Their face molds are more typical of African women: broader noses, fuller lips. They also come in several skin tones and hair styles, with hair ranging from auburn to true black. They were designed by an African American woman who wants her little girl to play with dolls that looked like the girls and women in her community. She designed them to be authentic, but also "cool". These new Barbies are made in the Barbie tradition. Their makeup suits their complexions, but its quite liberally applied -- and they have quite an eye for fashion. What's important -- and what may help us look past the glamor -- is that they are perceived as desirable by young girls of multiple races. Many mothers, too, are grateful for the representation.

The S.I.S line is not without its controversy. Some have criticized the hair. Several have long sleek tresses. Neither her hair nor her figure look like the average woman. Has Mattel gone far enough in teaching young girls to appreciate themselves as they are? I think, at the least, it's a step in the right direction. Little girls want Barbies, and they tend to want pretty ones with fancy tresses. Traditional Barbies probably look less like Caucasian girls than these dolls look like African American girls. If they looked like the average woman in the supermarket, they probably wouldn't compete with the white Barbie -- which don't look like the average woman in the supermarket either. I had to laugh at (or with) the Amazon reviewer who gave the dolls an overall favorable review, saying now her Barbie-obsessed daughter can get her unrealistic notions of beauty from a doll more like herself. 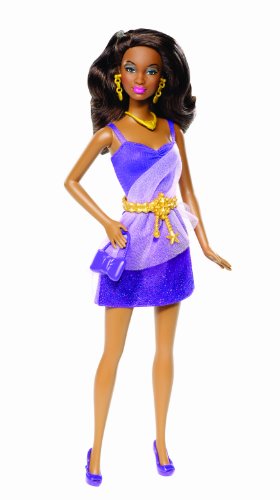 The line has evolved and changed. This Grace appears darker than the one I first came to know. Her hair is wavy; it's a style that I have seen out in the real world, but it's not quite natural. One thing I like about this particular model: The price is within reach of the average family.

This mom uses a very diverse set of fashion dolls to act out life lessons with her five-year-old.

The designer of the Mattel So in Style talks about wanting to create dolls that her grandmother would be proud of and that would let her little girl feel good about who she is. She says that it was important that the dolls be connected with the Barbie line -- girls feel good about having a Barbie.

SIS is the official doll of The Black Doll Affair. Donate a doll so that African American girls can have a doll to aspire to.

This writer notes that the SIS faces are, in fact, not new, but appeared on dolls for adult collector's. (You can see the mold on Princesses of the World: South Africa -- a doll that I find absolutely gorgeous)

One way to get a realistic representation for a child is to look at what's being marketed to adult collectors!

The Kenya fashion doll is a newcomer to the 11.5 inch doll market. She comes in light and dark African skin tones. Her hair is also variable in styling. On the one end, we see long tresses that are ever-so-slightly wavy -- on the other, a full, proud Afro. Two dolls, Rock Star and Movin On, have tightly curled hair. It's the hair, more than the skin or features, that makes this doll unique.

Best friend Denise, who I recently saw offered online for the first time, has a different face mold with a broader nose. It may just be me -- but her face reminds me a bit of the Barbie fashionista line. (Yes, these gals, too, are fashion-savvy.)

Sometimes Barbie Represents Economic Opportunity - (In this case, perhaps we can overlook those blue eyes.)

It's far easier to sew doll clothing than to mold an authentic doll -- and there are women around the world making beautiful clothing. Would you rather give less support to Mattel... and a little more to to artisans in less wealthy areas of the world?

Barbie Touches Lives Around the World

...And a Personal Recollection

Here is Razanne, one of two dolls that is sometimes called a Muslim Barbie... and here is my personal connection.

I've tutored (indeed, home schooled) children from a devout Muslim background. I remember the children's aunt arriving in head-to-toe black, with only her eyes revealed. I remember her bringing the children presents bought from a U.S. store. The kindergarten girl received something that many kindergartners would squeal with delight over. Her package held toy animals, not Barbies (puppies, perhaps?) but they were pastel -- a little girl's dream -- and came in a pink and purple box rather reminiscent of Barbie.

Differences mask similarities. Ah, the allure of that purple box!

This page isn't finished yet. But first a message from our... well, not our sponsors... our benefactors.

Barbies of the World: The Princess Collection

I've mixed feelings about little girls and princesses, but there's no doubt they love them -- my little niece has two off-brand Barbies in showy princess-satin.

Are princesses all fair skinned? Of course not! This Cambodian doll, from the Mattel line that introduced princesses of the world, has 20 favorable reviews and a five star rating. One is from a woman who is half Cambodian herself.

None Dolls of the World: Princess of Cambodia Barbie
Buy Now

Barbie Poll: I Want my Child to Have...

What Type of Barbie is Right for your Child?

Video: Two What Extent Do Children Share Our Perceptions?

Do dolls represent the same things to children that they do to adults? It probably depends on the child. This video shows two sides of the issue. A nine-year-old expresses that it's important to have a doll that looks like her. Meanwhile a five-year-old (white, but short haired) explains how important long hair is on Barbie. She declares that the skin color isn't important, but that Ken's not much fun because of the short hair.

Why Does it Matter?

But who's not pictured here? Older characters? Children? Those who don't have Barbie figures?

Barbies of the World: Interview

The interview here is with a designer who is Burmese, but grew up in California.

Barbie can have a diverse group of friends. Here is a doll that breaks the mold in more than one way. Like many modern Americans, she carries just a bit of extra. weight. The clothes she's pictured in here are far from glamorous. (Similar dolls are available in Caucasian and African American models -- male and female.) 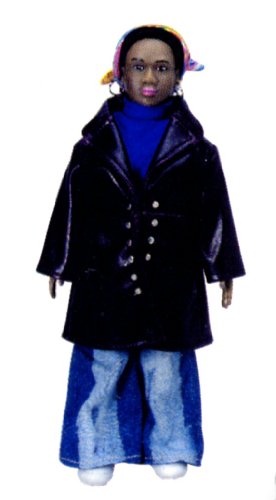 This is another one that's made by Mattel -- Happy Family Grandma. She has a slightly stockier figure, which makes her look more real. There is a black grandpa doll as well. Both are complete with quite a lot of baby accessories.

Mixis dolls are fashion dolls, comparable to Barbie. There are some important differences. Each one represents a woman of mixed ancestry and has features of two different ethnic groups (though not necessarily two races).

You can buy the dolls in denim or in sundresses. A limited collection of heritage dresses is available. If you click on the "Sunshine Collection" dolls, you can read about the ethnic background of each. Rosa Dominguez Katz has Latin American and Jewish roots. Emerald Okada is part black, part Native American. Opal Nkrumah has mixed British and African (Ghanaian roots), and you can choose curls or straight hair. Her story says that her parents met in Doctors Without Borders. As for Houda Degas, she's French/ Lebanese.

The dolls have natural (though slim) figures.

Career Barbie may only come in black and white,but there's Yue Sai, shown here in physician outfit. Yue Sai was designed by a Chinese woman. Most of the dolls that I've seen have a glamorous look to them. You can find her set to head out into nature as protector of the pandas.

The History of Yue-Sai Wa Wa

The Only Hearts girls, with their wholesome little-girl look, are sometimes seen as an alternative to Barbie. They represent elementary-aged girls, though, not teenagers. At about nine inches, they fit well in Barbie scale -- as a younger sister, a daughter, a student.

This line portrays modern girls of different races. Two of the eight dolls are African American. (One has black hair, the other auburn.) They have sometimes been criticized for having European features, but I think they do far more good than harm. It looks to me like most dolls have been made from the same face mold. An exception is Hannah Faith, who is of Asian ancestry. 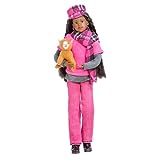 This mom shows dark toned dolls (infant to teenage) in approximately 1:6 scale. It's the same mom who wrote the post about using Barbies to teach empathy. She and her daughter act out scenarios regularly. I think it's very creative how she has incorporated dolls from different lines. She did, though, leave out a personal favorite: those beautiful Only Hearts Club dolls, who make very realistic stand-ins for children in the eight- to ten-year-old range. (I pictured the Asian Only Hearts Club doll, but there are also two African American dolls.)