Check out the scaled-down alternative to LEGO blocks! Nanoblocks are the smallest building blocks you can imagine.

Not surprisingly, Nanoblock sets came out of Japan, source of many very cool miniature things we geeky types can't help but crave.

C'mon, admit it -- your Inner Child has always loved LEGO, and if you're anything like me, you've got fond memories of hours spent on the living room, surrounded by those bright plastic building blocks. But who's got the space these days?

Building with the mini Nanoblock bricks will challenge you with a whole new level of skill and dexterity - and even in the smallest of apartments or dorm rooms, you'll have plenty of space to create your own miniature Nanoblock world.

How Small are Nanoblocks? - The Perfect Size for Stocking Stuffers, or for Desktop and Travel Toys - Start a Small Collection!

Compare the base of the completed Nanoblock Eiffel Tower (above) to an American quarter dollar. Amazing, isn't it? When they say micro blocks, they ain't kidding. With the regular edition of Nanoblock architecture sets, you can hold an entire building in the palm of your hand. And there are literally hundreds of pieces in each of those little Nanoblock construction sets!

There are also Nanoblocks Deluxe building models available, if you feel like a real challenge, as well as regular-sized construction sets for animals, aircraft and spacecraft, even Disney characters and more... but let's start back at the beginning, with the story of how I got so fascinated by Nanoblocks in the first place.

Build a Tiny Model of a World Landmark - Nanoblock Architecture

I always wanted my own version of Cinderella's castle. :-)

It All Started with Nanoblock's Eiffel Tower...

A friend-of-a-friend is semi-obsessed with The Simpsons, the TV series. Her favorite episode is the one where Homer takes the whole family to Blockoland ("Blockoland, not LEGOland. They're different, honest.") and Lisa buys an Eiffel Tower construction set, only to find that her Blocko model is missing a leg...

So, what better Christmas gift for the office Secret Santa exchange, but a

Nanoblock Eiffel Tower set? (After all, it's not LEGO!) The original plan, I'm told, was to secretly open the package and take out a few critical pieces... but those Nanoblock pieces are just so darned tiny, that plan was soon dropped.

Intrigued by the whole idea of these teeny-weeny micro-sized building blocks, which I'd never even heard of before, I looked into these Nanoblocks things, and was instantly hooked.

Who doesn't love to build a tiny building? Just imagine the interest you'd get from a home-schooled student if you pulled out a Nanoblock model like one of these patriotic kits, for a unit on United States history or citizenship!

One of the most popular Nanoblock buildings, this giant Himeji Castle model would make a great holiday project for the family - or a cool conversation piece and group activity for when you have some friends over. Set it out on a table and let everyone pitch in to fit together the small building bricks, and watch the tiny landmark model take shape in cool detail. 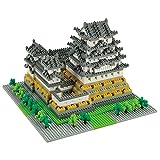 Perched high on a hilltop in Hyogo prefecture, Japan, this sprawling and intricately detailed castle is considered the finest example of 17th-century Japanese architecture, a must-see item on the itinerary of any tourist to the country who is entranced by Asian cultures and history.

Ad agency Team Detroit Pulse created this fun Nanoblock: Anthem spot for the Japanese toy brand Nanoblocks, when it launched in the United States in August 2011. "The blocks are tweezer tiny, kind of like the pipsqueak version of Legos," says advertising industry mag Creativity Online, "and to show off their itsy bitsy size the agency created this anthem spot" in addition to a whole series of online videos that feature a whole range of tiny Nanoblock-built characters. Check out Nanoblock USA on YouTube to see the little critters in action.

Which is the REAL Nanoblock?

The smaller Nanoblock Basic Bricks sets, shown above, are a great way to extend the model kits to make your own original creations - but not all hobby stores in the US, Canada, Europe and Australia are carrying a large number of the Kawada products yet, so some sets are at a premium price. Outside of Japan, Amazon usually has the lowest prices on Nanoblock bricks, but you can often find a real bargain or hard-to-find Nanoblock sets on eBay if you keep a sharp eye on the auctions and sales.

If you've already got a number of individual model kits then you may prefer to go with one of the smaller Nanoblock Basic Bricks sets above. The 1500-piece Nanoblock set shown below, however, will give you the best "bang for your bucks" - or maybe that should be "bricks for your bucks"! 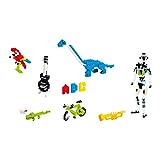 This 1500-piece basic set is the best value (cost/piece) if you're just getting started with Nanoblock building bricks and want to "color outside the lines" to make your own original Nanoblock models when you're ready to expand beyond the individual kits and really get creative with your building.

Here in North America, where Nanoblocks are distributed by Ohio Art, you can get a good range of construction sets through the usual retailers, esepcially online, and I've found the best prices tend to be on Amazon. Models not carried by Ohio Art can sometimes be found through the Japanese stores and sellers on Amazon, but the prices will be a smidgen higher as quantities tend to be limited.

If you keep a close eye on eBay, you can sometimes pick up a real collector item -- maybe a set that's available in Nanoblock's home country of Japan, or in Europe where Nanoblocks collectors are already getting pretty serious, but that may not be officially on sale in the American toy and hobby stores just yet -- maybe even a rare Nanoblock building blocks set made in limited numbers and hard to find anywhere!

Are you hooked on Nanoblock yet?