Obsidian, or as it is sometimes called, volcanic glass, is a naturally occurring rock that comes from volcanoes. When lava cools very, very quickly it can turn into obsidian.

Obsidian is usually deep black in color and it is used for making arrowheads, spear-tips, jewelry, and even scalpels, as well as being great to add to rock collections.

Obsidian is an extrusive igneous rock.

Igneous rocks are further divided into the categories of intrusive or extrusive igneous rocks. Usually when most people think of molten rock, they think of volcanoes and lava. They are the cause of extrusive, or outside the Earth, rocks. Intrusive rocks are caused when the lava (which is called magma below the surface) doesn't make it to the surface and cools inside the Earth. The Earth acts as insulation, so the magma cools slowly which causes crystals to form in the rock. This means that intrusive igneous rocks are more crystalline than the extrusive rocks which are fine-grained because they cooled very quickly due to being exposed to the air.

Not all intrusive or extrusive rocks are the same either though. Different chemical make-ups lead to different types of rocks. This means that molten lava or magma made up of different materials changes the resulting rocks.

Basalt - dark lava, what we typically think of when thinking of lava

Okay, so Obsidian is volcanic glass formed by super sudden cooling of lava and so is an extrusive igneous rock. What causes the uniqueness of it?

There are a couple of ways obsidian can form. One way is when the volcanic lava suddenly explodes and this explosion sends pieces of molten rock flying through the air, sometimes into the atmosphere where it cools very very quickly. Another way is when the lava flows out of the volcano, the top is exposed to the air and can cool quickly and become a sort of obsidian cap. Obsidian is also formed when lava flows into water, such as the deep hot smokers beneath the ocean or if lava rolls into a lake or the ocean.

This lava flow probably erupted when it was cold out, since it is a very rare example of an entire lava flow covered in obsidian. Usually obsidian is not very common because things like this don't happen really often.

In some areas it is possible to walk along the right spots and collect obsidian from the ground. Obviously, the areas need to have had volcanic activity and the right kind to find obsidian. And many of these areas are protected, so before collecting obsidian check with the laws in the area you plan to search.

Obsidian was very useful to native peoples since they could use it to make knives and spear tips and arrowheads. Obsidian arrowheads were a popular trading item since they were so necessary to life but since obsidian comes from volcanoes, not every tribe had access to the raw materials. This makes obsidian superb for tracing Amerindian trading paths. Each flow of obsidian has a distinct chemical signature, so pieces that come from it can be traced. This uncovered something amazing, obsidian arrowheads would travel hundreds of miles across country.

A big part of what makes obsidian great for arrowheads is the unique way it breaks. When hit just right obsidian breaks along curves. You'll see a similar effect when a pebble hits your windshield and it fractures, usually into concentric circles. Obsidian's way of breaking is called conchoidal fracture. Because obsidian breaks this way it can be formed into shapes by someone consistently and precisely tapping it with another rock. It takes a lot of skill, but master craftsmen have done it for centuries to create the utensils of survival.

Most minerals and rocks have more orderly alignments of atoms which causes them to break more easily along some planes more than others, which is why sometimes you'll find naturally formed minerals with straight lines or precise crystal shapes. Obsidian's very un-orderlyness is what makes it great for many uses.

GeoCentral - Two Arrowheads - Black Obsidian and Mixed Mineral - In Plastic Carry Box - 1 to 2 inches In Size
Get your own arrowheads.
Buy Now

Over a long period of time, the atoms in the formerly uncrystallized obsidian try to become more orderly and crystallize. This causes the obsidian to become un-glassy or dull and gray. It takes an extremely long time though and is most commonly observed in piles of obsidian exposed to the air and water such as the surfaces of obsidian flows or landslides.

Obsidian makes a great contribution to a rock collection. It is easy and cheap to get and is one of the most easily recognizable rocks, which makes it great for beginners wanting to learn. Without reading the labels can you spot the obsidian in the picture above?

One Black Obsidian Palm Stone with Pouch
This tumbled piece of obsidian would work great as a worry-stone, or just get it as a beautiful desk decoration.
Buy Now

Snowflake obsidian is obsidian with beautiful snowflake-like inclusions of cristobalite, a white mineral.

Mahogany obsidian is obsidian with deep reddish-brown streaks caused by high concentrations of iron oxide. It is my favorite type of obsidian because it is stunning and looks like mahogany wood. 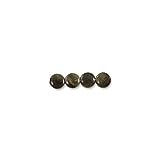 The name "Apache Tear" comes from a legend of a group of Apache warriors dying rather than being captured. According to the myth, the widows of the Apache warriors cried tears of sorrow over their loss and when these tears hit the ground they were turned to stone.