Pandemic Board Game Review - Can You Save The World?

Pandemic The Board Game: Cooperate Or Die!

Pandemic is a cooperative board game for 2-4 players, made by Z-Man games.

In this unusual game, players work together to try to save the world from 4 virulent diseases.

Each player takes on the role of a Specialist with different abilities that can help the team.

However, the diseases are spreading rapidly and if there are too many outbreaks, it's game over!

The clock is ticking....

Have you got what it takes to find the cures before time runs out?

All photos mine, unless stated otherwise.

A Cooperative Board Game

Yes, you read me right - this is a cooperative game.

Unlike traditional games, where you play against each other, cooperative games pit the players against the game itself.

Everyone wins or loses together.

If you haven't played this type of game before, then the concept may be hard to get your head round.

It's almost like playing a complex puzzle, except that the puzzle changes each time so the solution will be different too.

I enjoy "normal" games as much as anyone else, but there are times where cooperative games work really well. 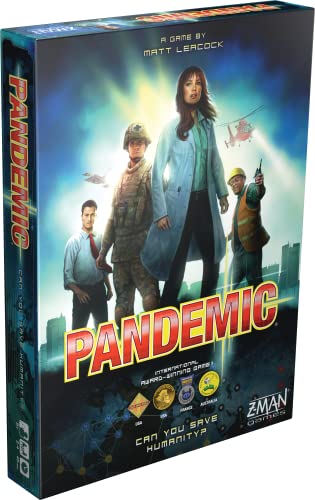 Pandemic Board Game (Base Game) | Family Board Game | Board Game for Adults and Family | Cooperative Board Game | Ages 8+ | 2 to 4 players | Average Playtime 45 minutes | Made by Z-Man Games
In Pandemic, the board consists of a map of the world, displaying major cities and the links between them. Bizarrely, this makes the game quite educational, because it will help you to learn where different cities belong, including some you may never have heard of. A typical game will take around an hour (the box says 45 minutes!), but expect it to be a bit longer on the first time through. The players start at Atlanta, where the real-life Centre for Disease Control (CDC) stands. 4 diseases are represented by 4 sets of coloured cubes, which 'spread' across the board as the game progresses. A disease can be cured by collecting 5 city cards of the same colour and handing them in at a research station. The goal of the game is to cure all 4 diseases and when the last disease is cured everyone wins instantly. However, it's not as easy as it sounds...
Buy Now

There is only one way to win the game, but there are 3 ways to lose.

The players lose when any one of the following occurs:

Don't expect to win on the first time through!

Dealing With Outbreaks In Pandemic

Photo, above: Chenai has 3 disease cubes already and is in danger of having an outbreak, which would spread to all connected cities!

However, the Quarantine Specialist is nearby and can prevent disease cubes from being placed in surrounding cities.

Don't expect to win on your first time through!

Tension Is An Epidemic

There's quite a bit of tension in the game as more cities get infected each turn, plus hidden in the player deck are some Epidemic cards.

The number of Epidemic cards used in the player deck determines the difficulty of the game.

When one of these appears, things turn up a notch:

...This means that the cities you have worked so hard to treat will get infected all over again in the next few turns, with further outbreaks potentially leading to a "chain reaction" across the board!

As well as the immediate danger of the epidemic itself, increasing the infection rate will result in more cities being infected at the end of future turns.

The rules recommend using 4 Epidemic cards for an introductory game.

At this level, the maximum number of infection cards drawn each turn will be 3 - and only towards the end of the game.

Once you've got the hang of it, you can move on to 5 Epidemic cards for "Standard" difficulty, or 6 for "Heroic".

By the time you get to the end game on Heroic difficulty, you will get 4 cities infected each turn!

The number of Epidemic cards in the Player Deck determines the difficulty of the game.

Role Playing In A Board Game

What I particularly like about Pandemic is that each player is given a random card at the beginning of the game that gives them their Role.

Each Role has a different ability which overrides the 'normal' rules.

For example, when the Medic Treats Disease, he can remove all disease cubes from a city (normally, you can remove only 1), while the Scientist can cure a disease using 4 cards instead of 5.

There are 7 roles but only 2-4 players, so you'll get a different combination of abilities each time you play.

This forces you to re-think your strategy according to what each player can do.

It also ensures that each player feels valuable and a part of the game - which is good news for families like mine!

It can be tempting to pick and choose roles, but in my experience it really is worth playing with random role assignments.

When you first start playing the game, certain roles such as the Medic or the Scientist seem to stand out, with abilities that sound powerful (they are).

This is a very social game too.

The simple but challenging mechanics mean that players will often discuss strategies as they go, so you can sometimes spend more time talking than actually playing!

However, each turn doesn't last long, thus ensuring that things keep moving and everyone stays involved.

On our first game, we got lucky with a large number of helpful special events cards appearing near the start (I guess I hadn't shuffled them as well as I thought).

This meant we got very close to 4 cures, without the diseases spreading too far.

Sadly, bedtime intervened so we never finished it, but the kids were wanting to play it again as soon as possible.

- I can't give a better recommendation than that!

Since then, we have played it most weekends and after a number of games at the Introductory level, have moved on to the Standard difficulty.

It's surprising how much difference 1 extra Epidemic makes and we have lost as many games as we have won at this level.

It can also become a little bit tricky keeping everyone in line without talking over the top of each other with good ideas for strategy, particularly if you have a child that likes to overrule everyone else all the time...

We therefore introduced a house rules involving a wooden spoon:

Thankfully, the kids seem to have settled down a lot now, so we can play without the spoon these days.

This isn't a game for very young children as there are small parts, and the disease markers (small translucent plastic cubes) could look like sweets to toddlers.

The box gives an age rating of 10+, but most 8-9 year olds would have no problem getting to grips with it.

Have you ever played a cooperative game?

Do you love them, or find you can't seem to get your head around the idea?

Have you played Pandemic and have you worked out how to beat it yet?

Let us know in the comments.