Puppet shows were a popular form of entertainment in some of the ancient Mediterranean civilizations, including those of Egypt, Greece, and Rome.

After the fall of the Roman Empire, theatrical traditions were continued in Europe by puppet shows. Puppeteers dramatized scriptural stories and presented them in early Christian churches. During the Middle Ages, puppet shows with religious themes became popular attractions at fairs and in village marketplaces. Secular themes were added by later puppeteers. Puppetry had a particularly strong tradition in Italy. Italian puppeteers traveled throughout Europe popularizing their craft. They brought with them Pulcinella, their favorite puppet character. This famous puppet may have been an adaptation of a character created for Italian comedy in about 1600. By 1650 he was appearing in puppet shows in Paris as Polichinelle, and in the following decade he was familiar to audiences in London, where he became known as Punchinello, or Punch. The English Punch developed into a humpbacked and hook-nosed puppet who was boastful, cunning, and violent. Other European countries also had favorite puppets, such as Hanswurst and Kasperle in Germany and Austria, Petrushka in Russia, and the clever and likable Guignol in France.

Puppets were also popular in the New World. The troops of the Spanish adventurer Hernando Cortez were entertained by puppet shows in Mexico as early as 1524. During the 18th century, puppet theaters were established in Quebec, Canada, in New York City, and in Mexico City. In Europe during the 18th century, puppet shows were often marked by charm and sophistication. At that time, Powell's puppet theater and Lord Barrymore's puppet operas attracted fashionable audiences in London. The Austrian composer Joseph Haydn composed operettas for the private marionette theater of Nikolaus Esterhazy, a Hungarian prince.

Early in the 20th century the old folk traditions of the wandering puppeteers were replaced by new trends and a fresh approach. Puppeteers, apprenticed to masters, developed a puppet theater with original dramas for both adults and children. In the United States the work of Tony Sarg, Ellen Van Volkenburg, and Remo Bufano did much to stimulate interest in puppet theaters during the 1920s. Since then, puppets have been used in musical comedies and in motion pictures. They have also appeared on television in outstanding shows designed by well-known puppeteers, such as Burr Till-strom and Bil and Cora Baird. The construction of puppet shows by students have proved to be an effective part of the educational program in many schools and colleges. Puppetry has also become a highly popular hobby. 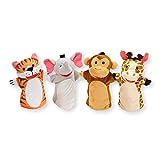 The art of manipulating puppets, or puppetry, generally had its beginnings in religious and magic rites. There is evidence that puppets were known in ancient India, Egypt, Greece, and Rome and that they were used in religious rituals and to illustrate miracles and stories. The practice of puppetry gradually spread from the temples to become popular entertainment and finally became a folk art, full of lusty drama and swordplay and broad low comedy. In many instances it was the only dramatic expression of the common people, and it was often censored for disrespect of the ruling classes. Many distinguished authors and composers have been interested in puppetry because of the wide range of possibilities it offers.

Marionettes have been found in Egyptian and Etruscan tombs, and were known among the Greeks and Romans. They have been popular from very early times in India and the Far East. Puppet-plays were formerly common at English fairs, and are popular in Italy where, under the name of Fantoccini, puppet performances often reach a high degree of artistic merit. Puppets have been employed with great success in motion picture films, apparent animation being imparted to the figures by successive "takes" of the puppets in slightly different positions.

Puppet theatre has been featured in almost all developed civilisations. In Europe there are written records from the 5th century BC and puppet playing certainly was included in the repertoire of medieval jongleurs and minstrels, but it is not until the 16th century that we can identify the nature of the plays they presented.

In most countries and at most periods, the puppet theatre has been a form of popular or folk theatre, often featuring a comic character who appears in a wide repertory of plays. Such are Pulcinella in Naples, Gerolamo in Milan, Facanapa in Venice, Polichinelle and Guignol in France, Kasperl in Germany, Petroushka in Russia, Lafleur in Amiens, Jan Klaasen in Holland, Tchantches in Liege, Hanneschen in Cologne, Karaguez in Greece, and many another. It may be noted that most of these characters are portrayed at the present time by glove puppet, but Lafleur and Tchantches are marionettes, Hanneschen is a rod puppet, and Karaguez is a shadow puppet.

From time to time in history the puppet theatre has become a fashionable form of entertainment. One such time was the 18th century, when quite a number of operas were composed for puppets, including works for Cardinal Ottoboni's theatre in Rome by Alessandro Scarlatti and for Count Esterhazy's theatre in Hungary by Joseph Haydn. The puppet theatre has often provided a suitable medium for parody, as in England early in the 18th century when Martin Powell's theatre in Covent Garden gained much attention by guying the craze for Italian opera, and later in the century when Henry Fielding (under the pseudonym of Madame de la Nash), Samuel Foote and Charles Dibdin presented puppet shows to satirise literary and theatrical fashions of the day.

In the latter part of the 19th century the puppet theatre was discovered by artists and writers as a medium worthy of serious attention. In Germany an essay by Heinrich von Kleist in 1810 was a forerunner of this kind of attention; in France George and Maurice Sand directed a home puppet theatre at Nohant in the 1860s and 1870s which inspired many followers; in Belgium in the 1890s Maurice Maeterlinck wrote symbolist plays that he believed could best be played by marionettes; in England in 1907 Gordon Craig hailed the iibermarionette as the ideal actor; and in Germany in the 1920s Paul Klee, and other artists of the Bauhaus movement, experimented with puppets. Finally, Ubu Roi, originally written for puppets by Alfred Jarry in 1888, has been hailed as a percursor or the 'theatre of the absurd' of the 1960s.

This intellectual interest, however, has been confined to a minority. For the general public, puppets have increasingly come to be regarded as an entertainment for children. While they certainly can provide an excellent form of children's theatre, their range is wider than this; a number of companies in Britain and America are attempting to provide both adult and children's entertainments with puppets in the face of considerable economic problems; these difficulties are lessened for the puppet theatres of eastern Europe, where massive state subsidies have permitted work of great technical accomplishment and artistic sophistication to be achieved during recent decades.