A review from this Mum who also happens to have a recurring 'thing' for LEGO. 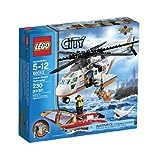 So I bought this as a present for my son's 9th Birthday entirely because there was a shark in the set. You see my son's ALL TIME favorite LEGO toy is by far the single Lego gray shark I bought him from amazon years ago. He uses it to play out shark attacks (he really loves sharks) and it's brilliant because mini figures fit perfectly inside the shark! He has spent countless hours playing with that one little shark and even for a while carried it with him in his pocket everywhere he went, that is until he realized the chances of losing it were high!

So if your little boy is a shark fiend like mine and you're looking at this set for that purpose let me tell you right away... the shark in this set is TINY! It's a mini baby version of the original grey shark I bought him and it's white. No way you can fit a full mini fig inside but you can definitely get a little creative and fit a removed arm, leg or head :) And they do look cute side by side... like a daddy and baby jaws.

So admittedly at first when we opened the box... we were a bit disappointed...... that is until we built the helicopter!! Can I just say.... the engineer who designed this one... gold star! No batteries required with a fully operational automatic lifting winch (if that's what you call it?)

And the feel of pushing the helicopter on surface is so smooth and awesome (it moves 360 degrees in any direction because of the front rotating wheel). I was so impressed! And as soon as it was finished... my boy was right into having fun playing imaginary shark attack... but this time with a helicopter rescue team to come in and save the poor mini figs from certain death!! (and this is a big difference to many other lego sets in the past I've bought him that he's shown no interest in playing with... that have just sat there gathering dust!!)

Will never regret this purchase... turned out surprisingly to be one of the best Lego sets I've ever bought my son (and believe me... I've bought him too many to admit).

I highly recommend this set. And at an awesome price point too!!

Oh and I've bought a previous LEGO city helicopter in the past which pales in comparison to this one.