Along with Rollercoaster Tycoon there were two expansion packs released in the following years: Corkscrew Follies and Loopy Landscapes which completely added to the game making the replay value so much higher

Rollercoaster Tycoon 2 also had its expansive packs this time including Wacky Worlds and Time Twister.

Then there was Rollercoaster Tycoon 3 and no longer Chris Sawyer was at the helm and unfortunately this part of the trilogy was just not the same as the first two versions of the game. Do not get me wrong Rollercoaster Tycoon 3 is a solid game and will stand up to any simulation PC game on the market today it just seemed to be missing something

RollerCoaster Tycoon 3D or also known as Rollercoaster Tycoon 4 has been rumored for years and apparently it is suppose to be coming out sometime this year, 2012. There are a ton of rumors about what the game which will actually contain but again it is all rumors so far. As for fans who have been waiting forever for Rollercoaster Tycoon 4 it is unlikely to live up to the hype. 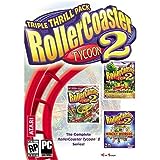 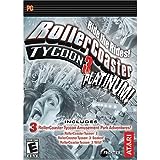