Shrinky Dinks are only limited by imagination

This retro toy is usually thought of as a craft but it is so much more. Children have been making Shrinky Dink jewelry and other projects since 1973.

While there are specific kits with pre-made designs ready for coloring, imagination is the only real requirement. Many of the kits are for jewelry making and geared more towards girls but this is also a great gift for boys.

My 10-yr-old is getting one for Christmas (it's in the closet, don't tell him). I can guarantee that is is going to be one of his favorite gifts. Besides, it was one of my favorite things to do so it is something that we can share together. The photo shows that even big people play with Shrinky Dinks. How much fun is it to make your own pins?

1970s Shrinky Dinks Colorforms Commercial - Why not start out with one of the original commercials?

Learn a little about Shrinky Dinks

Basic kit where you create your own shapes 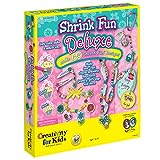 Shrinky Dinks have been around a while.

Have you had fun creating Shrinky Dink one-of-a-kind items?

Shrinky Dinks in the Crockpot

Making Shrinky Dinks in the Crockpot did not occur to me but I found a blogger who did just that. What a great idea and so much easier than the oven.

I found a great new use for Shrinky Dinks

One of my favorite things to do is play with buttons

When I started with Button Crafts, I was limited to what was available in the stores. All of the buttons are pretty much the same and even the more expensive ones were not that exciting. I discovered I could make buttons with polymer clay which allowed more creative and unique buttons. It wasn't until I ran into the tutorial for the buttons shown here that I realized Shrinky Dinks had even more to offer.

Although I didn't take pictures, I made buttons for one of my friends with the names of her kids. It was easy, fun, and she got personalized buttons she was able to use. Between the polymer clay and Shrinky Dinks, the possibilities for buttons are endless.