This is the only game where Grandma laughed so hard, she snorted her drink through her nose, sending the rest of the family into fall-on-the-floor laughter.

Spoons is an old game that requires very little equipment. A deck of cards and kitchen spoons are all you really need. OK, so you will also need a piece of paper and a pencil to keep track of who got the spoons. Three or more players are needed but the more players, the faster paced this games gets. This is a great game for family gatherings and great for any age.

How to play Spoons

Select a dealer. Break up the cards into sets of four of a kind. An example would be four jacks. Pull out a set of four for each player. There are other ways to setup the cards but this is the really simple version. Shuffle the cards and deal four to each player.

Begin the game. Have each player continually pass one card from their hand to the player on the left. As soon as a player gets four of a kind, they must try to get a spoon. Here is where the stealth comes in. Once someone has four of a kind, they reach for a spoon. They need to be quick. As soon as there is movement towards the spoons, the remaining players will start grabbing the remaining spoons. You have to be fast because someone will not get a spoon. That player is considered out of play.

Remove one set of card and one spoon and start a new round with the remaining players. When you get down to two players, they are considered co-winners.

Another way to score the game, especially when the amount of players is small, is to award the person who didn't get the spoon a letter. This is where you need paper and pencil. The first person to spell S-P-O-O-N-S is eliminated. Eliminate each player who spells "spoons". Continue playing until there is one player left. The last person standing wins the game.

Going over the river and through the woods to Grandma's? - Take a hostess gift that eveyone will appreciate

It is customary to take a hostess gift when attending functions. Wine is nice but why not take a gift basket with all the items needed to play spoons. It's inexpensive and will provides entertainment for young and old. Find a simple basket, get a notepad, pencils, spoons and cards. Type out the rules and print them on fancy paper. Wrap it up in cellophane and present it to the host. It may be the best gift they ever received and will provide hours of fun for all.

Bicycle Playing Cards - Poker Size - 2 Pack, RED & BLUE
While there are other playing cards on the market, Bicycle has always been the kind I buy. They are stronger and do not fray at the corners.
Buy Now 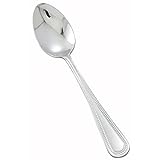 Winco 0005-01 Dots Mirror Finish S/S Teaspoon - Dozen
I had to buy spoons to play the game. It seems the boy has a stash in his room because he takes food in but the spoons never come out. Now I have a set dedicated for the game only.
Buy Now

There are more ways to play

I've never heard of "Pig" or "Tongue" but you can play the same games without spoons. While they both sound fun, I like the spoon addition.

Watch a family playing Spoons. Stealth and speed are important!

Other fun things to do with spoons

So you bought spoons. What else can you do with them? Learn to play them of course. This is an old art that children love to learn. Even older children (those older than 50) enjoy this as well.