The date is 1974. The place is Budapest, Hungary. Erno Rubik, an admirer of geometry and 3-D forms creates the world's most perfect -- and addictive -- puzzle. More than three decades later the Rubik's cube is still one of the best selling brainteasers. Whether it was full size or the smaller keychain version almost every child had this puzzle by in 1980 when it found worldwide success. Elementary school kids were seen solving it with their feet on "That's Incredible!", conspiracy theorists believed it was an Eastern bloc tactic to distract American youth from getting an education, and Cubaholics Anonymous was formally established to help cure the compulsive need to solve it.Each side is just over 2", while each sticker is about " square.For all of the hullabaloo, the Rubik's Cube actually has a pretty straightforward premise. The faces of the cube are covered by nine stickers in six solid colors (one for each 2.25" side); when the puzzle is solved, each face is one solid color. Then you realize as you turn the rows and columns and see all the colors flash by that there are 43 quintillion possible pattern combinations (that's 43 million millions), but just one right one. Maybe Cubaholics Anonymous wasn't such a bad idea after all...

* "43 Quintillion" possible moves and only "ONE" solution! * As a special added bonus, a Free Rubik's Cube stand is included * This completely redesigned gift package is a sure-fire, must-have collectable! * Twist and turn the Cube using various combinations to return it to its original state...every side finally having one solid color! * A stimulating challenging puzzle! Rubik's Cube is the world's popular 3-D puzzle phenomenon!

The object of each puzzle is to rearrange the pattern of lights by sliding, twisting and turning the Rubiks's Slide in any direction until the lights match the solution for that puzzle. With over 10,000 brain-busting puzzles, the Rubik's Slide is a brand new challenge for all ages. 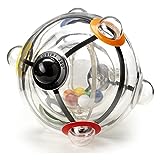 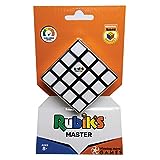 Rubik's 4X4 will drive you crazy. You may think you will be able to solve this puzzle quickly, but then you make a turn on the cube and it changes all over again. The constant changing Rubik's 4X4 will keep you entertained for hours. 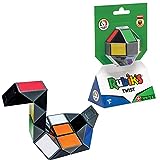 A new twist on the classic Rubik's Cube, this is a twisting puzzle challenge that takes the form of thousands of shapes. Solve one shape and move onto another. Or devise your own creation to defy your friends. Includes one Rubik's Twist.

It's the amazing, folding puzzle by the makers of Rubik's cube. Fold it, flip it, make it, and solve it. This Rubik's cube is made up of panels that can be folded in many different ways. The challenge includes finding the puzzle solution as well as moving the panels into exciting shapes and designs. Create incredible designs or check out the Magic challenges in the instruction booklet. This fantastic puzzle will keep you entertained for hours. For 1 player ages 8 and up.

The World's best selling and most famous puzzle has just turned 30! Our beautiful limited edition Wood Rubik's Cube celebrates this milestone. Erno Rubik invented the Cube 1974 in his home town of Budapest, Hungary. Rubik's called his invention the "Magic Cube" He wanted a working model to explain 3-dimensional geometry, and ended up creating the worlds best selling toy. More than 300 million Rubik's Cubes have been sold world wide. If all the cubes were placed on top of each other it would be enough to reach the north pole from the south pole.

The 2x2 Cube is so cool it's hot! This smooth styled icy design will help you keep your cool and things heat up trying to solve this challenging 2x2 puzzle. The Rubik's Ice Cube comes with an iceberg stand for your cube to chill and be displayed on. 1 player. For ages 7 and up.

Transformers Rubik's Cube Allspark-The fate of the Allspark is in your hands! Stop at nothing to restore the power of the Allspark! Reconstruct the cybertronian image….and win an epic battle of good vs. evil. Will you save the Allspark from the grasp of Megatron and the Decepticons? Solution hints and Booklet inside!

Techno Source puts a whole new spin on a classic toy. Based on the famous Rubik's Cube, the Rubik's Revolution offers six fast-paced electronic games packed in one cube with lights, sound effects, and increased levels to keep you playing this gadget for hours. Rewarding fast hands and fast thinking, this electronic toy is recommended for all ages 5 and older.

Following up the 2008 TIA Toy Of The Year Game of the Year Rubik’s Revolution, the Rubik’s TouchCube seamlessly blends cutting edge technology with the world’s #1 puzzle to create the first completely electronic, solvable Rubik’s Cube. Featuring touch sensor technology on all 6 sides and lights in every square, slide the lights with a simple swipe of your finger to mimic the moves of the original Cube. To eliminate false inputs or moves, the TouchCube uses a motion-detecting accelerometer to determine which side is facing up and active. The Rubik’s TouchCube also includes a built-in solver, so now anyone can easily get a hint or learn how to solve the Cube step by step.

A sleeker, more stylish version of the Rubik's Cube has arrived. This trendy new Cube features shades of black, silver and white. The puzzle has the classic Rubik's Cube challenge with a sophisticated new look. 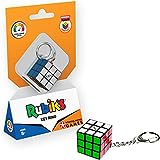 A miniature version of the world's most challenging puzzle. The key ring is not only way-cool, it really works! Ages: 7 and up Players: 1 player Contents: 1 3x3 Rubik's Cube Key Ring