5 Ways to Enhance Your Ability to Perceive the Life Force

A foundation of Chinese medicine is what some call Life Force, or Chi/Ki.  Many forms of healing reference in some way or another this energy or flow of energy. This article provides five simple practices that anyone can do to enhance their ability to perceive not only their own Life Force but also that same spiritual energy in others.

I always thought that psychics and those people with an ability to "tune in" to others were born with the gift. I didn't think that it was something that could be developed. After some success helping people "enhance" their psychic gifts through hypnosis, I explored this idea with "normal" people and found that even the most skeptical person often had the same ability to "tune in."

One day, I had a husband and wife in for a smoking cessation and stress reduction session. The husband had joked that he wanted to be psychic so I told him that with hypnosis, I could make that happen. During the session, I told him that when they opened their eyes, he would become the world's greatest psychic.

As their eyes opened, he began to smile and giggle. After pushing him to explain what was so funny, he kind of whispered, "I know what she's thinking." As it turned out, he surprised all of us, including me, at how well he was able to pick up on his wife's thoughts.

We had fun with this for a while, but then he said, "Honey, I think I know why you've been having pains in your stomach." He said he somehow sensed that the body wasn't breaking down a certain food just right and that she should eat more leafy green vegetables. (This was later proven true.)

But then he went on to describe how he was able to "not see, but kind of feel pictures" of a developing problem inside of HIS body. I told him to close his eyes and return to a deep state of hypnosis where he could then have a conversation with that part to find out exactly what needs to be done to clear out and prevent this problem.

I must admit that being able to do this so quickly is not the norm. However, even if it doesn't happen for you immediately, it is definitely something that can be developed.

After this session, I began exploring with other clients, suggesting that they "tune in" to their body and listen to the Life Force flowing in and through so that they could sense any blockages or problems. I found this to be a very effective tool in helping people not only heal themselves, but also to prevent sickness in the long-run.

Now, with most every client seeking some sort of healing, I give the following simple practices that anyone can use to enhance their ability to perceive not only their own Life Force but also that same spiritual energy in others. One thing that I remind people is that spirituality should be enjoyed. It should be a happy thing. So have fun with these. Play with them and play with others. The more you experiment and the more fun you have, the better your abilities will become.

And now, 5 Ways to Enhance Your Ability to Perceive the Life Force

Rub your hands together quickly, pushing hard into each other until you can really feel the warmth. Then immediately place them in front of you, facing each other about shoulder width apart. Cup your hands as though you are holding small balls in the palms.

Now take in a deep breath and as you let a certain sense of calm just sort of begin to wash through you, imagine that between your hands is a ball of energy. Breathe again and let your mind really focus in on this ball of energy at each palm.

After it feels just right, very slowly move your hands towards each other. S-L-O-W-L-Y and breathe and really try to imagine energy in the palms of your hands. As your hands get closer and closer, you may sense that something is kind of being squeezed between your hands. Now slowly, very slowly, separate your hands. You may feel a sort of magnetic or a barely-cool sticky sensation that seems to want to keep your hands together.

Interesting note: There is nothing physical between your hands. You can't see it. Others can run their hands between your hands and feel nothing. But there really is something there. You're not imagining it. This is very real. THIS is Life Force energy. It is everywhere. All you have to is calm your mind and body for a moment, focus a bit, and let yourself perceive it. 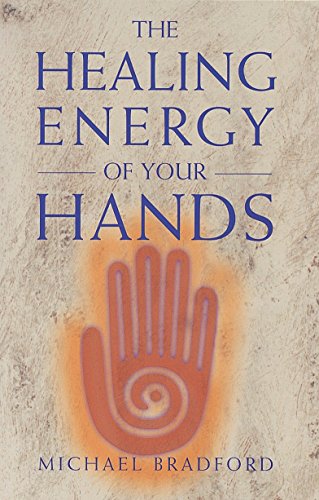 The Healing Energy of Your Hands
Buy Now

2. Sense the Energy or Aura of Someone Else

This can be done at any time, anywhere. It helps to sense the ball of energy first, but it's not necessary. This is one you should have fun with!

Standing a good distance away, bring your hand up with your palm facing your partner. Focus your thought on the palm of your hand and just imagine a little something of energy right there. Now move towards your partner until you sense that you've somehow touched into their "force field." Explore this boundary a bit - backing up and moving forward until you get a real good sense of just where it is.

It may be easier to just walk towards the person. Again, as always, breathe in and calm the body just a bit, then walk towards someone until you sense a very subtle feeling or barrier. The size of the barrier doesn't seem to mean anything. A very small barrier doesn't mean that the person is inviting you in, nor does a large barrier state that they don't want you near them. It's just what happens to be how big their aura or energy field is at the time.

This is that "personal space" that people talk about. Do this with someone you don't know real well. Just walk towards them and let yourself get TOO close. Both of you will almost simultaneously kind of just feel the boundary. Explore this. Experiment with others and find their Life Force boundary.

3. Do Some "Public Sensing"

As you go out in public, see if you can find the boundaries of people you come near. (Don't be a dork about this and come across like a stalker. Don't get in someone's face and don't use it to flirt with or annoy people.)

While standing in line at the market, for example, if you happen to walk past them or towards them, just see if you can sense their energy field. (If you do and it's a stranger, back away! You are literally invading their space and it may make them uncomfortable. If there's no ill-intent other than to heighten your senses, then there's no harm in simply noticing their energy field.

Or maybe with acquaintances at work or with friends, you can have fun. Tell them exactly what you're doing and ask them if they can tell when you've gotten just a little too close. Almost always they will tell you they sense exactly when you sense.

Now it's time for you to commune with nature. Go hug a tree... for real.

It's a little more challenging for some people to sense plants, but there's something about doing this that really heightens a person's sense of spirituality. Walk up to a tree, maybe exchange a few words of appreciation (quietly or in thought if you're in public so as to keep the neighbors from talking), extend your hand, focus your thought, and sense the tree's Life Force.

It may even be easier to NOT extend your hand - just feel it with your chest or body.

You can even carry this a little further: Really tune into the tree and imagine yourself exchanging in mutual appreciation the Life Force as yours extends down and into the roots, and then out to the smallest leaf moving to the slightest of breezes. Feel the grounding. Sense the balance. Appreciate that as you breathe, you give life to the tree as it takes in carbon dioxide, which then gives off oxygen in the photosynthesis process, thus returning the favor by giving YOU life.

5. Tune In to Yourself

Now that you've gone external and practiced a bit (which isn't necessary, by the way - it just helps to do so), now it's time to sense your own Life Force.

Here's exactly what I suggest to clients during the hypnosis session:

"And now, as you take in another deep breath, hold it for a moment, and then just let everything go...

Sometimes, curiously enough, such things somehow manifest themselves in specific areas of the body. And so, in a moment I'd like you to take in a deep breath and mentally scan your body. Taking all the time you need, going with the first things that come to mind, if your thoughts rest on a certain area of the body, just let your mind focus on that area... And if there are no areas, then simply do the following for the entire body. While focusing on that area, surround it with the warm energy of your color. Then, with another deep breathe, slowly dissipate this into nothing. Imagine it breaking into tiny pieces and then disappearing completely...

And now, go ahead and take in that deep breath and then scan your body for any awareness, going with the first things that come to mind. And taking all the time you need, surround it with the light... and then dissipate it into nothing with another comfortable breath. Don't push, just let it happen on its own time.

And if you think it may help, go ahead and scan your body for any other blocks or awarenesses you may feel. Dissipate this into the light as well with another deep, comfortable breathe...

And once this is done, just enjoy for a moment the feeling of simply tuning in and connecting to your body, to your Life Force, to your spiritual and greater self."

So there you go, 5 Exercises to Enhance Your Ability to Perceive the Life Force.

Remember, have fun with this.

The Foundations of Chinese Medicine: A Comprehensive Text for Acupuncturists and Herbalists. Second Edition
Buy Now