Did you know honey saves lifes? A man with a very serious yeast infection in his leg facing leg amputation who was miraculously cured by Manuka honey, is the living proof.

Antibiotics treatment and other medicines didn't work because the bacteria were resistant but when they started treating the life threatening wound with Manuka honey the patient was cured and able to keep his leg. Read more about this story on the NZHerald.

This wonderful healing is only one example of the many health benefits of honey. Honey is used for treating all kinds of ailments since the dawn of mankind. The documentation of honey as a medical treatment goes back more then 4000 years.

Ancient peoples like the Egyptians, Assyrians, Babylonians, Greeks, Romans, and Maori tribes already knew about the therapeutic and healing properties of honey. Aristotle knew pale honey is: "good as a salve for sore eyes and wounds". Even the Bible refers to the Promised Land as "the land of milk and honey". (Exodus 3:8)

Manuka honey, a monofloral honey , is made by honey bees who gather nectar solely from the Manuka bush, commonly called tea tree, which grows in remote parts of New Zealand.

This Manuka bush (Leptospermum scoparium) is closely related to the Australian Jellybush. More animals are aware of the special properties of the Tea Tree. Kakariki parakeets (Cyanoramphus) use the bark and leaves of Manuka to rid themselves of parasites. They eat the plant but also chew it and apply it to their feathers.

When captain James Cook discovered New Zealand he learned the Maori people used this special bush for its medicinal qualities. The Tohunga, the Maori medicine man, used the parts of the Manuka bush for treating fevers and colds, flu, stomach aches and as a sedative.

Captain Cook named Manuka the "tea tree" and wrote this about it in his Endeavour Journal : "the leaves were used by many of us as a tea which has a very agreeable bitter taste and flavour when they are recent but loses some of both when they are dried. When the infusion was made strong it proved emetic (induces vomiting) to some in the same manner as 'green tree"'.

Honey as a modern medicine

Although used all over the world for centuries the benefits of honey have been forgotten since the invention of penicilline and antibiotics.

Nowadays it is perceived by many as the next scam of the continuously growing health industry. But while more and more bacteria grow to be resistant to antibiotics honey is now being reinvented as a serious and effective treatment.

Many research has been done the last 20 years by Professor Peter Molan of the University of Waikato in New Zealand. He and his team have established the Waikato Honey Research Unit.

Dr. Molan has discovered that Manuka honey has a unique compound apart from the normal antiseptic compound that can be found in all types of honey. This compound, which occurs in some but not all kinds of Manuka honey, has been given the name Unique Manuka Factor (UMF).

"In Manuka honey, and its close relative which grows in Australia called jellybush, there's something else besides the hydrogen peroxide. "And there's nothing like that ever been found anywhere else in the world."

At the Waikato Honey Research Unit they measure how well Manuka honey fights bacteria by comparing it with standard antiseptics. The results are overwhelming. Manuka even works for treating resistant bacteria like Helicobacter pylori (the bacteria considered the main cause of stomach ulcers), Staphylococcus Aureas and MRSA (the so called super bug )
Manuka honey is being used as an effective wound care treatment.

Dr. Molan: "It works on bacteria, fungi, and protozoa. We haven't found anything it doesn't work on among infectious organisms"

The antibacterial and antimicrobial activity in Manuka Honey has to be tested in order to be called "Active" Manuka Honey. Only tested active Manuka honey with an UMF factor of 10+ or higher is suitable for therapeutic use.

There is scientific proof that Manuka honey and really works on treating infected wounds and against skin ulcers. It is also being taken for stomach relief, to reduce acid reflux, sore throat, stimulation of the immune system and many more:

Did you know about these special health benefits of Manuka honey?

This is a compelling story about a guy who was trying to save foster dog Bella. This Saint Bernard was terminally ill and it was a close call or she had been saved when her caretaker found out about Manuka honey. He has written this blog post to make other people aware of the possibilities of treating seemingly untreatable wounds. There are some explicit photos of the ear tumor. 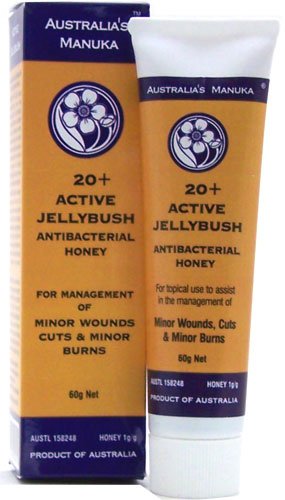 Where to buy active Manuka honey

If you want to buy active Manuka honey make sure it has the name UMF clearly stated on the front label and has a rating of UMF 10+ or more. Manuka honey with an UMF rating of 5 can not be called active.

If you take a look at the Amazon bestseller list below you'll see Wedderspoon Raw Organic Organic Manuka Honey Active 16+ is the best selling Manuka honey on Amazon.

The amount of reviews (this product has by far the most) also seems to give an indication this is the best product. But it's not because it is not UMF rated, thus not tested in accordance with the Waikato Honey Research Unit for its activity.

The fact that most of the bestselling Manuka honeys on Amazon are not real active UMF products shows that there is much confusion.

Be aware of what you buy

The products below are real active Manuka honeys that are tested for their healing abilities.