While some conventional medicine still do not recognize the condition of "adrenal fatigue", it is a real condition that many people of the modern fast-pace lifestyle often experience. Many people may go from doctor to doctor trying to find help with their symptoms only to be told that they had nothing wrong according to the tests.

But of course, they know themselves that something is wrong. These symptoms may include fatigue for no reason, difficulty getting up in the morning, sweet or salt cravings, low sex drive, low mood, anxiety, irritability, frequent colds, a general feeling of burnout, and other symptoms.

The book Adrenal Fatigue by James Wilson writes that ...

"... it is a bleak picture for the person who is experiencing symptoms of what is probably the most widespread, yet unrecognized, healthy syndrome today, adrenal fatigue." [page xxii]

Some estimate that 80% of people experience some form of adrenal dsyfunction at some point in their lives.

Fortunately, adrenal fatigue is more widely recognized in the functional medicine community. So if you have symptoms of adrenal fatigue, continue searching for a physician that is willing to listen and take the time to find the root cause instead of just prescribing drugs that mask the symptoms. Consider looking for a function medicine practitioner such as on the Institute for Functional Medicine website.

Although "adrenal fatigue" is the commonly used term, perhaps "adrenal dysfunction" is an more apt description. One of the important hormones that the adrenal gland produces is cortisol, which some people may know as "the stress hormone" involved in the "fight or flight" response.

Article in NaturalNews says that high cortisol is the hormone responsible for feelings of road rage. It also notes that ...

"Cortisol secretion is promoted by the presence of even the tiniest bit of light. This is why it is so important to sleep in a room that is completely dark with no alarm clock glowing in the dark."

In order to feel well, you need just the right amount of cortisol. Having too much or having too little can be a problem. For example, having too much cortisol can cause high blood sugar and insulin resistance, because the body is anticipating greater glucose utilization for the fight-or-flight response.

Article in Today's Dietitian list some of the harmful effects of high cortisol including high blood sugar, weight gain, immune suppression, gastrointestinal issues, cardiovascular effects, and other. Sometimes high cortisol is not due to stress but due to a tumor in one of the endocrine glands which causes over-secretion of cortisol.[reference]

Adrenal fatigue or adrenal dysfunction is when the adrenal glands which sits on top of the kidneys is producing either too much or too little cortisol. The adrenals are meant to help us adapt to stress. But when are constantly stressed in a modern lifestyle in which we never stop, we burn out our adrenals.

Stress and inflammation are contributing factors to many illnesses, not just adrenal fatigue, but also autoimmune diseases.

"Adrenal fatigue (also known as adrenal exhaustion and adrenal burnout) is associated with inflammation and autoimmune disease, which is why it's so important to understand and better manage the stress in your life." [page 18 of The Immune Recovery Plan]

She also writes on page 113 summarizes how to keep your adrenals happy:

"The adrenal glands are happiest and healthiest when you're sleeping a minimum of seven but preferably eight or more hours a night, eating balanced meals that contain adequate protein and veggies, limiting sugar and white flour, practicing some form of relaxation, exercising moderately (not too much and not too little), and minimizing your exposure to toxins."

Another Hawthorn University webinar on "Adrenal Health" by Marcelle Pick is also worth watching in the link provided.

I know everyone says exercise is good. However, for certain people with adrenal fatigue with cortisol deficiency, they should not over-do strenuous exercise. This was mentioned by Marcelle Pick in the webinar as well as by the hosts of the Balanced Bites podcast episode #39.

"Chronically high cortisol interferes with digestion, immune function, sleep, and the body’s ability to produce other essential hormones, such as DHEA, testosterone, estrogen, progesterone, and thyroid hormone. Over time, unrelenting cortisol production can contribute to excess abdominal fat, high blood pressure, high blood sugar, and aches and pains from too much inflammation. It demands too much from the adrenal glands and affects DHEA production, which in turn compromises bone health, immunity, mood, and sex drive."[1]

Life Extension Magazine wrote of some studies that found that phosphatidylserine was able to blunt some of the cortisol rise from post-exercise. The result suggests that phosphatidylserine can help reduce cortisol levels due to other mental and emotional stress. Note that short-term moderate exercise does not increases cortisol levels by much and it is only transient. In fact, regular exercise is known to decrease overall stress levels. So there is no need to worry about exercising causing increase in cortisol levels.

"The researchers found that ginkgo inhibited the rise in salivary cortisol levels after the stress test, with the greatest benefit in the afternoon."

They also mentioned another study where DHEA reduced cortisol. Because DHEA is a hormone and that taking it from external sources can negatively affect the body's feedback mechanism, it is not recommended to take DHEA unless it has consistently tested low and you are under the supervision of a knowledgeable practitioner. And even then, it should be a low dosage.

The adrenals not only produce cortisol, but a whole bunch of other hormones such as DHEA, progesterone, testosterone, and estrogen. The precursor to all these steroidal hormone is pregnenolone. The adrenals also produces epinephrine and norepinephrine.

Functional saliva test can test your cortisol levels throughout the day. BioHealth Labs, Genova Diagnostics, and ZRT Labs are just some that does this test and you can find practitioners on their website.

Typically four saliva samples are taken from morning to night during a normal-stress day. Cortisol is supposed to be highest at 8am and then drops towards evening when we are ready for sleep. This can determine if your cortisol is too high or too low -- both cases can indicate adrenal fatigue.

It could also be that in earlier stages of adrenal fatigue, the cortisol is high due to constant stress. Then it switches over to low cortisol in more advanced stage due to adrenals becoming burned out. The cure would be to stop stressing your adrenals so that it can recover.

Many of the saliva tests can also test for the DHEA levels and the cortisol / DHEA ratio can be calculated. If this ratio is too high, that means that the adrenals may be making too much cortisol to the detriment of DHEA.

What is the ideal value of cortisol?

The optimal values of these two hormones are difficult to find. And it will depend on the age, since both cortisol and DHEA naturally declines with age. Cortisol also depends on the time of day it was measured.

Different lab tests (saliva, blood, urine) and laboratories may report different "normal ranges". Some based the ranges on the statistical value of the people who have taken these tests. And there is not as much statistical data as say for cholesterol, because these specialty tests are less frequently done by conventional practitioners.

"Normal values for a blood sample taken at 8 in the morning are 6 - 23 micrograms per deciliter (mcg/dL)."

What is the ideal value of DHEA?

"Adrenal exhaustion from coping with chronic stress means your adrenal glands are overworked from manufacturing cortisol, and they simply can't produce enough DHEA to support a healthy hormonal balance. ... The scientific jury is still out on the subject, but it appears normal daily DHEA production for an average person in their 20's is between 10-25 mg."

He also mentions to avoid oral hormone preparations and give preference to the use of creams instead.

Adrenal Fatigue is an HPA axis problem. HPA axis means the Hypothalamic-Pituitary-Adrenal axis because they all are connected. The hypothalamus sends Corticotropin Releasing Hormone (CRH) to the pituitary. The pituitary then sends Adrenocorticotropic Hormone (ACTH) to the adrenals. And the adrenals then releases cortisol. The cortisol will provide negative feedback back to the hypothalamus and the pituitary to slow it down a bit.

Chris Kresser talks about his adrenal fatigue in one of his Revolutionary Health Radio episodes.

You can listen more in his podcasts, but he goes into about ...

He says that he almost always start with ...

"adrenal adaptogens, botanical adaptogens like ashwagandha and rhodiola, eleutherococcus, which is Siberian ginseng, and some micronutrients that are good for general adrenal support, like pantothenic acid and vitamin C"

Although in some more advanced stages, he did mention ...

"sublingual bioidentical hormones like pregnenolone or DHEA for a temporary period"

But since these are hormones, you have to work with a health care practitioner and have levels checked. They are only meant to be used temporarily as it can affect the body's feedback mechanism when you are putting in hormones via an external source. And taking DHEA when cortisol is really low can make things worst. Dr. Hedberg in the previous video believes that many times they are over-prescribed in too high of a dose. 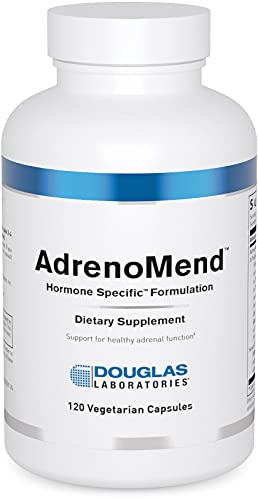 For more information about various adaptogens, the below webinar video by Dr. Joseph Collins talks about the use of herbs for adrenal fatigue. He formulated the AdrenoMend supplement.

Supplements and Herbs for Adrenal Fatigue

The book Adrenal Fatigue: The 21st Century Stress Syndrome goes over some herbs and supplements that can help support the adrenals. They include vitamin C, B vitamins, vitamin E, magnesium, and other trace minerals. The herbs include licorice root, ashwagandha root and leaf, Siberian Ginseng, ginger root, and ginkgo biloba.

However, before taking any of these, you have to know whether your cortisol is too high or too low. If they are too high, then certain nutrients such as phosphatidylserine can help lower it. If they are too low, then something like licorice root can help boost it.

Adaptogenic herbs such as ashwaganda, rhodiola, and ginseng works in both cases of high and low cortisol.

T-nation.com has article on nutrient support depending on whether cortisol is too high or too low. RobbWolf.com also has article on some supplements and nutrients aids.

Real Cause, Real Cure: The 9 root causes of the most common health problems and how to solve them
Buy Now

Dr. Jacob Teitelbaum mentions the supplement Calming Balance in his book From Fatigued to Fantastic. In his other book Real Cause, Real Cure, he explains how Calming Balance made by Health Freedom Nutrition reduces anxiety through the active ingredients of B1, Niacin, B6, B12, Pantothenic acid, and Magnesium.

Because adrenal fatigue is often associated with increase inflammation, some anti-inflammatory supplements may also help.

"...your adrenals use up about 90 percent of the vitamin C you take in and require a constant rich supply of the B vitamins as well. ... Your basic calcium, magnesium, and vitamin D are also used up at a tremendous rate by your adrenals during stress. Your adrenals need plenty of both vitamin D and omega-3 fat in order to make their stress-fighting adrenaline and norepinephrine." [page 93]