All About Black Cohosh

What is Black Cohosh good for?

Black cohosh is a herb used by some alternative health adherents to induce labor. It is also used to address issues associated with menopause such as hot flashes, PMS, osteoporosis, and acne.

Black Cohosh, also called bugbane, is a variety buttercup. Only the roots are typically used in medicinal preparations. 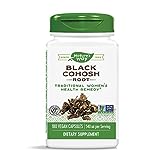 When is the best time to take Black Cohosh and how much should I take?

The FDA has not issued recommendations on Black Cohosh, so there is no official dosing schedule. The clinical studies on the safety and effectiveness of Black Cohosh, however, have typically used a dosing regimen of 8 mg a day, split into two doses twelve hours apart.

It's important to remember that Black Cohosh may stimulate uterine contractions, so it should not be used by women who are or may become pregnant, unless it is recommended by a doctor.

Have you ever taken Black Cohosh?

Can you get breast cancer if you take Black Cohosh?

Black Cohosh is believed to have an estrogenic effect on the body. Since some breast cancers are believed to be related to the used of estrogen-based hormone replacement therapy, it is natural to be concerned that Black Cohosh might have a similar effects. Studies have neither proved or disproved this, however. The NIH has summarized the studies here.