In an earlier study published in 1997 in the journal of the American Medical Association: 202 people with Alzheimer's were given either a placebo or ginkgo extract of 120 mg a day. A year after the start of the research, the ginkgo group retained more mental function. Further studies have corroborated this finding.

Several articles written in the Journal of the American Medical Association have shown the benefits and findings of ginkgo biloba, including brain function. In many studies, it shows short term improvement to the cognitive decline in older adults, though there is no evidence on the long term effects. More studies need to be made.

A well publicized 2004 study in the Journal of the American Medical Association indicated that 120 mg of ginkgo extract per day for one year was able to provide some benefit in cognitive performance in patients with Alzheimer’s disease.

What we do know is that Ginkgo improves blood circulation around the body, including through the brain. Research has shown that ginkgo inhibits the formation of beta-amyloid, a protein that forms amyloid plaques in the brains of people with Alzheimer's disease.

Overall there is no conclusive evidence that ginkgo will prevent Alzheimer’s, but research shows that it helps. We do know that it does help with improve the age related cognitive decline of concentration and memory, absent-mindedness, confusion, lack of mental energy, and sometimes, depressive mood. The benefit of ginkgo biloba is that it improves communication between nerve cells and enhances blood flow to the brain. It is licensed in Germany for the treatment of age related cognitive decline (ARCD). It has not been approved in the United States for the treatment of Alzheimer's disease.

In no way would this replace seeing a physician and getting proper medial treatment. But the benefit of taking this herb is well worth a daily regimen. It is recommended to take 120 mg one or two times a day. Stay clear of any claims that this herb will prevent Alzheimer’s disease. But if ginkgo biloba can help even in the smallest way to help with proper brain function and slow down the onset of the disease of Alzheimer’s then it is worth taking along with proper nutrition.

A Sign Of Alzheimer’s Is Being Called, That Guy

For years my father-in-law would repeat his stories of the past as if he were saying them for the first time. Yet he had trouble remembering daily events or even who certain people were. My husband’s name was, “That Guy!” My father-in-law was always happy to see That Guy. It was nice of him to sit down and listen to the good old days. Sometimes, That Guy would take his parents out for a ride or dinner. He always enjoyed That Guy’s company.

The last year of my father-in-laws life, it became increasing hard for my mother-in-law to take care of him. She was afraid he would just wonder off somewhere. Despite this, he still had his driver’s license and he had his good days. My mother-in-law always got her hair done once a week. It was one of his good days, so she thought. He dropped her off at the beauty salon with instructions to come back at a certain time.

When the time came, she stood outside waiting for him. She had seen him drive right past her. He didn’t come home that night nor the next. They found him a couple of days later 50 miles away lying in a farmer’s field, cold and confused. This is when it was decided that he would go to a nursing home, though a hard choice to make. That Guy and his family visited him everyday. He died a few months later.

Would taking a daily supplement of ginkgo biloba when the onset of Alzheimer's occurred prevention this? My answer is no. But it could of helped. 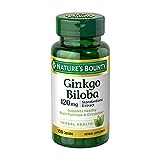