What Causes ADD and Other Learning Disabilities?

Apparently learning disabilities and behavior disorders like ADHD, ADD, etc. have been around for quite some time.

It's said that Albert Einstein, Winston Churchill, Thomas Edison, Leonardo da Vinci, and William Shakespeare all had learning disabilities though they didn't call them that back then.

They were written off as students who would not go anywhere because they couldn't concentrate or seemed to be "lazy" about their studies.

Imagine what the world would be like without these great examples of learning disabilities or inattention to school work!

The point here is that learning problems and behavior disorders have been around for centuries so what causes them is harder to pinpoint. Most medical researchers are of the opinion that somewhere along the way, part of the neuro transmitters in the brain did not connect correctly and this is the organic cause of the dysfunction--or difference in learning style.

There are theories today that syndromes like attention deficit disorder, attention disorder hyperactivity disorder, obsessive compulsive disorder, Asperger's and various learning disabilities are on the rise due to toxic effects from our environment. Only time will tell and maybe someday there will be a medical test that can be performed to properly diagnose people who seem to fit the profile.

Is ADD a Learning Disability?

Quite the contrary. People with ADD are often super smart and able to process information faster than the "average" person. They often score much higher on achievement tests than the general population.

But the ADD child can have difficulties learning--which are often masked by negative behaviors such as acting out. The problem arises in the ADD child or person when they need to concentrate or focus on only one thing. The most annoying part of ADD is the distraction factor. In situations where they can't seem to understand something, they might act out in an effort to mask their deficiency so as not to feel bad about themselves.

Attention deficit disorder can also be coupled with hyperactivity, which further complicates the situation by needing to be in constant motion or going 100 miles an hour.

The typical profile of someone with ADD is that they have many irons in the fire at once and are always doing something, always having ideas--but they frequently fail to accomplish any of them or very few of them because before they finish one thing, they're on to the next thing.

One of the down sides is that an ADD child in a classroom is a terrific distraction to other children trying to concentrate. They require special handling in terms of teachers who understand the disorder and know how to switch an ADD child from task to task in short spurts. ADD children in order to succeed in traditional classrooms require a teacher who "gets" what ADD or ADHD is all about.

Into adulthood, the person with ADD or ADHD may find it difficult to hold down jobs or maintain long term relationships. The propensity to engage in one thing after another is sometimes too exhausting for other people to tolerate.

The inability to finish things that are started also can cost the person with ADD their job.

Many ADD and ADHD adults turn to substance abuse such as drugs or alcohol to try and curb their symptoms and try harder to "fit in." It's vital for someone struggling with ADHD or ADD to get help or seek counseling for it.

Attention deficit disorder and attention deficit hyperactivity disorder are in the behavior spectrum of disorders but they are not something that people can control. Unfortunately, people suffering these symptoms are often attacked for their character rather than understood as having a medical problem.

Do People with ADD Have Learning Disabilities?

Children or adults with ADD do not have learning disabilities per se and not across the board. That is not to say that they don't have a hard time learning or that any given child or adult won't have specific areas where they simply can't process information in a certain form.

The reason for the difficulty in an ADD child or adult can be more connected to their inattention rather than a real learning disability but again, they may not be able to learn auditorily for instance.

Learning abilities are not just academic in nature. The way people learn can have a powerful effect on what they learn and also on how quickly they learn things.

The most common learning difficulties center around these areas:

So do the above four categories fit a person with ADD or are these learning disabilities strictly reserved for other children and adults who have trouble in these specific areas?

The answer is complicated. Many ADD children and adults can have problems in processing in some of the areas mentioned above. However, sometimes it can be more a matter of the ADD brain not being able to catch up to pay attention and store the information.

Learning disabilities exist of course apart from ADD but people with ADD can also have trouble with specific areas of learning. These might involve doing math problems, balancing checkbooks, playing sports (because there are too many steps to pay attention to), or learning appropriate social skills.

It doesn't mean that they are less intelligent than anyone else. Remember that ADD and learning disabilities of any kind are not a lack of character but a physical neurological impairment.

The most important part of helping someone with ADD is diagnosing it correctly and figuring out what parts of the person's life are going well and which parts are trouble spots. 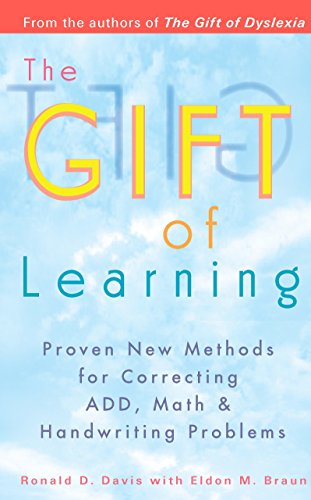 How To Deal with ADD and Learning Disabilities

The best treatment for ADD and any learning disabilities is tolerance. There has to be a certain amount of understanding on the part of parents and teachers when a child has ADD or an associated learning hardship.

Many people have endured bullying and hazing as a result of their "slowness" only to go on to become famous...for instance the brilliant minds mentioned above.

Ways of coping with these neurological disorders will vary from person to person but most important is figuring out how a person learns and then concentrating on every positive learning experience that comes along. Trying to make a child or adult with ADD or learning disabilities fit in, tow the line, or get over it just isn't going to happen.

How every single person learns is different. The key to continuing to embrace learning is to foster in each individual a love or thirst for more knowledge--about anything. The most important thing is that someone learns--no matter how they do it. Once the best practice for that person is figured out, it makes learning all the more enjoyable--and the sky's the limit.

Neurofeedback is a technique that is thought to be beneficial for learning disabilities and ADD. It remains to be seen what other therapies will be developed in the years to come to help people who have these learning difficulties or attention problems.

They aren't really disabilities if you think about all the brilliant people who have them. They are just learning difficulties. Once you get past the symptom by learning how to treat it (help them to learn somehow), you've essentially found a cure--or at least a fix.

Medications can also be of benefit in treating ADD children and adults. However, much is still to be learned about the role that medications have in truly solving the problem or merely masking it to make the child or person "tolerable" to others.

It's most important for people who are fortunate enough to not have learning disabilities or disorders like ADD to remember that people with these obstacles to overcome didn't ask for them. The old saying of not judging lest we walk a mile in someone else's shoes is very valid in this case!