What is the Child Life Council? Caring for Children in Hospitals 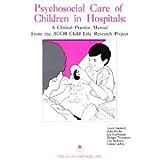 The concern was that children who are very sick in the hospital are often confused, frightened, depressed and under a severe amount of stress. The early play program was designed to help encourage the children to express their thoughts and feelings resulting in increased cooperation and less fear of their medical treatments.

By 1950, there were at least nine functioning early play programs at hospitals in North America and also one in Quebec at the Montreal Children’s Hospital.

In 1955, Dr. Frederick C. Robbins (1916-2003), Director of the Department of Pediatrics and Contagious Diseases at City Hospital in Cleveland, Ohio (now Metrohealth Medical Center), pushed the need to address the social, psychological and educational needs of children who were receiving long-term care.

Emma Plank took the opportunity to create the now internationally renowned “child life” program, serving as the director of the Child Life and Education Division of City Hospital until 1972.

History of the Child Life Movement

In the early to mid 1970’s, the ACCH sponsored workshops for the skills development of child life therapists. In 1974, a committee was formed under the ACCH for Child Life Activity Specialists. In 1975, this became a specific course of study in higher education.

Throughout the 1970’s, many new programs were started. In the late 1970’s, a Child Life Task Force was formed to create staff accreditation and professional standards.

The Handbook of Child Life: A Guide for Pediatric Psychosocial Care
Buy Now

Formation of the Child Life Council

The Child Life Council (CLC) was formed In 1982. Within one year, membership grew to 235 members. A method of credentialing for professional certification was established in 1986. By 1988, membership in the CLC was over 800.

During the 1990’s, many exciting changes took place including the publication of the Operating Principles for Child Life Specialists. The Child Life Profession strategic plan was carried out, and the professional certification methods were established. At this point, the CLC membership reached 1,500. Annual conferences for Child Life professionals began in 1998 and continue today.

By 2001, there were approximately 400 child life programs in existence. The CLC consisted of more than 2,000 members as they celebrated their 20th anniversary in 2002. The publication “Child Life Beyond the Hospital” was released in 2008 by the CLC dedicated to practicing child life in alternative settings.

Specialists in Child Life work directly with children and their families in hospitals and other healthcare settings helping them cope with the challenges of illness, disability and hospitalization.

Some examples of support include: self-expression activities, coping strategies, pain management, play, preparation for medical procedures and support/ guidance for parents, siblings and other family members as well.

Members in the Child Life Council include professionals such as:

Does my local hospital or healthcare facility have a Child Life Program?

Most hospitals that have adopted the Child Life Program will usually have a special section on their website. You may also find Child Life information under subheadings such as “Family-Centered Care,” “Child Services,” or “Patient and Family Services.”

Child Life programs have become customary in many pediatric centers including hospitals, outpatient facilities and emergency rooms. Child Life Specialists can now be found in settings such as courtrooms, bereavement groups, private practice and hospice programs as they continue to address the psychosocial needs of children.

This is Sharyn’s Slant