Colostomy and ileostomy closures - a surgical ordeal for my wife

Umesh is a freelance writer contributing his creative writings on varied subjects in various sites and portals in the internet.

Surgical interventions sometimes become essential to correct certain medical conditions. This gives relief to the patient and most of the times he or she gets improvements and comes back to normal life. Unfortunately, in some cases, complications take place and then further surgical medical actions become necessary to save the life of the patient. This case history is pertaining to my wife and is a story consisting of a series of operations and in fact during that ordeal I learnt a great deal of things related to that medical condition and the follow up actions. Subsequently, I thought to bring these experiences in black and white for the readers interested in medical case histories and may be some colostomy patients might also get some valuable information from this article. This would also help those people in understanding the complexities of colostomy and colostomy closures who have interest in medical and health related articles.

The need for first surgery

My wife was having a problem of back pain and irregular menstruation and on medical examination we were told that some small tumour was building up in the uterus and was responsible for these symptoms. The doctor told that if it increases in the size than it may require surgical procedure to remove it. This was in the year 2003 and soon we forget about this and she was living with that tumour whatever size it was. Time was flowing like that and in March, 2004 when we were staying in a guest house in Delhi for a short visit she suddenly started heavy bleeding and later we came to know that actually the tumour had enlarged in size and had bursted and started to bleed on that day. It was really a scary as well as an emergency situation and I took her to the nearest hospital and they put him on saline, glucose and then some routine tests and finally started to supply her blood to compensate for loss of blood. It took some time for the bleeding to stop and once her condition became stable they advised us to go for removal of the uterus (hysterectomy) along with the enlarged tumour. As there was no other alternative we simply nodded for it.

Just a few days after the patient came to a stable condition by continuously giving blood and other liquids intravenously, we were told that the hysterectomy operation would be taken up. The operation was carried out in March, 2004. During the operation the surgeon removed the uterus, ovaries, and associated parts with much care. It was an open surgery and the lower abdomen was slit open to make place for working of the surgeon and removal of the uterus as well as the parts of the burst tumour. Anyway, operation was completed and patient was first kept in ICU and then shifted to the room for complete recovery.

Just after 2-3 days patient started complaining of fever and also found that stool was coming out from the vagina also. It was a fearful thing to see and immediately the surgeon was called. After some observations and tests the surgeon told that there is a cut in the rectum through which the stool is leaking to the vagina and in medical terms it is known as recto-vaginal fistula. He also told that this was a serious situation and only way to combat it was going for a colostomy surgery.

The surgeon also told that there were two options after the colostomy operation. First is that the patient may opt to live rest of his life with colostomy and second was after some time when the fistula is healed could go for closure of the colostomy to become normal as earlier.

The patient was referred to another surgeon in the same hospital who was a colostomy expert. He came and explained us about it. The cut in the walls of the rectum was opening to vagina and until that cut was sutured or healed nothing can can help in stopping the stool to leak through that cut to vaginal passage. So it meant that this part of the rectum has to be repaired and kept for healing for quite some time and during that long interval the patient has to be provided an outlet for the stool and that is where colostomy operation comes in picture.

The descending column is generally the place where colostomy operation is carried out in such cases of recto-vaginal fistula complication. The basic procedure for the operation is to cut a slit on the left side of abdomen and to pullout the descending pipe (the colon) outside and cut it and make an artificial opening at that place. At the same time the lower abdomen is also slit open to join the lower part of descending column which is hanging free now to some part in the abdomen wall normally at the navel level so that it gets blood supply and remains alive for long time when the patient returns back to the hospital for closure of colostomy and joining these two parts together to make the patient normal. 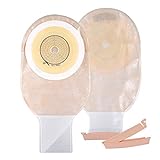 KONWEDA 20 PCS Colostomy Bags,One Piece Drainable Pouches for Ostomy Ileostomy Stoma Care, Cut-to-Fit
These bags are good to handle and easy to use and can be drained intermittently.
Buy Now

I learnt the fixing and changing of colostomy bags and started to do it regularly. This was a tedious thing to do but I had to do it as colostomy nurses were not available so easily and moreover it was a costly proposition to hire them full time.

Another problem was that the self adhesive disc created rashes on the skin and we had to use certain ointments and medicine to cure it. In fact, maintaining colostomy was a very difficult task sometimes testing the limits of one's patience.

To give the skin of the surrounding place a break from the self adhesive disc I innovated simple cotton bags fastened to the skin with medical tapes. That gave some relief but these cotton bags were to be replaced more frequently due to hygenic reasons.

Time passed like that managing my wife's life with colostomy and after about 1 year we decided to consult the doctor for closing it and joining the colon back to its original position so that the patient can live a normal life. This time we wanted to go to a more reputed surgeon so we consulted a doctor in one of the good hospitals in Mumbai (India) bwho asked us to get admission for closing it. The recto-vaginal fistula was found to be perfectly healed and there was no hole or slit in the rectum wall so doctor fixed a date for operation. In March, 2005, the colostomy closure operation was done and took a few hours and apparently everything appeared normal. After 2-3 days motion did not start and patient started to have discomfort in the abdomen area. Endoscopy was done and it was found that probably the colon joint was not working and the to and fro motion of alimentary canal was not taking place in the colon around the joint and there was no flow of food or stool materials through it. It was again a serious condition and in such cases the only option was to go for another operation by sacrificing a small length of earlier ends of the cut colon and join them again. The surgeon told that as the lower part of colon up to rectum was temporary connected to abdomen interior at the navel level for keeping it alive for long but it might had happened that due to limited blood supply to it, same might not be as vibrant and another attempt after cutting small lengths at the ends and joining them again could be made but there was a hitch that after joining it has to be healed which will take time and meanwhile the patient has to go for ileostomy which is actually another operation of bringing smaller intestine out of the abdomen at some suitable point so that stool can come from it till the colon joint is healed.

This was really another shock to the patient and then there was no go except going for an operation called ileostomy.

So the colon was cut and a little length removed and again joined as planned and ileostomy was grafted on the right side of the patients abdomen. After healing of ileostomy wound the patient was discharged with an instruction to come back after 3-4 months for closure of ileostomy. It was hoped that by that time the colon joint would also be perfectly healed and would function as desired.

Ileostomy was to be managed in the same way as we were earlier managing the colostomy. But this was more difficult as partially digested food was coming out of the ileostomy wound and creating more rashes and irritation on skin as compared to the colostomy. Anyhow, using the bags and cotton napkins somehow we managed this and waited for a few months for healing of the colon joint.

Due to the formation of a recto-vaginal fistula subsequent to hysterectomy operation, my wife had to undergo a series of operations which had been a traumatic experience creating continuous stress and anxiety in her. 17 years have passed since that last operation and she is keeping a normal health. It was a difficult time but God gave us courage and strength to face that.

It took about 18 months from colostomy operation to closure of the ileostomy and and patient became normal. Many people are benefitted by these surgical procedures for restoring back them to normalcy. In some cases where the lower part of colon is removed due to cancer, the patient has to live with colostomy for rest of his life and there are many people who are managing their lives in that condition.