Courage Is Not For Cowards

Once upon a time, there was a cowardly lion. The lion refused to believe that he had courage. He didn't feel courageous. He was scared of his own shadow. It wasn't until he was confronted by a scary situation, that he realized, he had more courage than he ever imagined.

At that time, he was awarded a medal from The Wizard of Oz, to show every one that he was courageous. The cowardly lion was no longer a coward. He wore his medal proudly. As should you.

During our lifetime we are all faced with moments that could make us want to cower in a corner. This is our choice. We could either flee or face the fear. You might not have the energy or drive to face the situation. You might think you aren't brave enough. You might think it's easier to flee. You might think that this will just go away, if you ignore it.

No matter which way you think, chances are once you are faced with a dilemma...you have the capability to face the fear. You have more courage than you think. You are not a coward, whether or whether not you chose to confront the situation.

Stepping out of our comfort zones is a challenge. Your courage will lead you to the left, right or marching down the center, either way...you are learning important lessons which will allow you to grow. Believe it or not, you could make this happen. Allow your pride to shine and your courage to roar.

I wish I had an explanation of courage. The true meaning of what it is like to be courageous. Yet, I don't. All I know about courage is that you feel it. You either feel the bravery or you don't. There is no such thing as kinda courageous. You are or you aren't. There is no in between. You will proudly display your medal or it will continue to collect dust on a mantle.

Friends and family often ask me, how did you become so courageous? I do not have an answer. It is something that just happened. There are times when I stop and allow myself to think...where did that courage come from? How was I just able to handle that situation?

I was a very shy child. I know this might be difficult to believe, but it is true. I would literally cling to my mother's skirt and hide when people spoke to me. Tall people frightened me. Actually most people are tall compared to my 5'1 stature. But they don't frighten me anymore.

The cancer journey I've been on with my husband since 2008 has endorsed my courage. I proudly wear the medal, but this did not happen overnight or suddenly. I was placed in a position to fight or flee. I chose to fight. As did my husband. His courage has helped show me that being courageous is simple, when you set your mind to it. Or, you have no other choice.

My mother's cancer battle also helped show me courage. She was a brave woman. Never backed down. When you learn from the best, it's hard to follow the rest. Just like courage is not for cowards, neither is cancer.

I've encountered so many brave souls along our journey. I truly thought I didn't have the courage to fight alongside my husband, since I witnessed my mother's battle. I convinced myself that mentally I could not handle another cancer journey. Those thoughts lasted a whole 15 minutes, I then put my boxing gloves on, once again. You seriously didn't think that Sunshine would back down, did you?

I dreaded chemo. As did Dave. We did so many treatments and luckily avoided chemo. We had heard and witnessed so many horrible side effects caused by chemo. Dave watched his father succumb to the cancer treatments and I witnessed my mother's suffering. We knew we did not want chemo. Until the day our oncologist said, it's time to begin chemo. We sighed. We were scared. Dave accepted the next chapter. Me, not so much. I still had awful images in my head. I wasn't ready.

That same day our oncologist asked us to wait in a hall near his office for him. Dave and I were leaning against a nearby wall. I sighed. Dave read the sports section. He's flexible like that. Not much stresses him out.

In the corner of my eye I noticed a little old man reclined in a chemo chair. His expression was lost and confused. My heart felt so sorry for him. He was so fragile looking and all alone. Just not fair that he could live to past retirement age and instead of enjoying his life, he was fighting for it. He had a hospital blanket partially covering him, but he looked cold. It was at this time that he noticed I was looking at him. We made eye contact. I smiled at him. He gave me the biggest darn grin and his eyes came to life. He then slowly pulled his blanket up to his chin and turned his head to the side. He then closed his eyes and went to sleep with a courageous smile on his face.

I will never forget that image. In just a moment that brave man had reminded me, how courageous I was. Any time I think I can't go on, his serene smile gives me the gentle push to move forward.

Courage is a gift that we all possess

Courage comes when you least expect it. We just have to open our minds to welcoming the courageousness into our world.

Courage to me, is being brave enough to face your fears. Standing tall with your chin held high, when faced with a frightening situation. Courage is, not backing down when placed in a corner. Courage is, the cancer fighters who fight for their lives. They sit in their chairs, for hours at a time, while chemo is being slowly dripped into their bodies. They will go to any means to win the battle. Courage is, the victims who no longer want to fight. They have accepted their fate and decide to stop treatments. Their bravery is to be admired. Courage is, the caregivers who sit by their loved ones and tend to their needs.

Having courage is a gift. You have courage, you might not realize it yet, but it's there. If you aren't wearing your medal proudly yet, because you think you haven't earned it...I suggest you think again, because chances are you are not a coward. Just like the cowardly lion, who thought he didn't have courage, but once faced with a challenge, he proved that he was the bravest of the brave. He roared with delight when he received his medal. Go on now, let's hear you roar.

Courage: To be or not to be

Do you have courage? 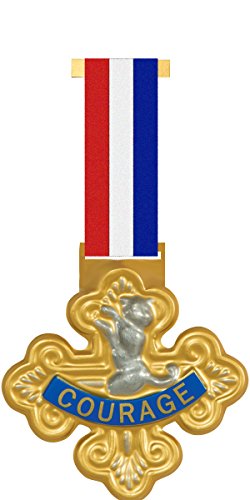