Create Yourself: Why you’re Wasting Time Trying to “Find” Yourself

Join me at my website, New3Creation A Writer's Haven and see more thoughts of inspiration and empowerment.

My big sister introduced this saying to me. I’ve never heard it before, but the words really struck me as my mind immediately went into curiosity mode.

Creating yourself? What the heck?

What does that entail?

Where would I start on such a project?

Being the research person that I am, I immediately jumped onto my laptop to find out where such a profound statement came from. George Bernard Shaw was an Irish novelist from Ireland and had modest upbringing. His father was an alcoholic which left the family with a small amount of money to spend on George’s education. He was mainly self-taught and attended local schools, never entering a university. He was not a big fan of structure and discipline and was a very open minded person. As a result of his many books and pamphlets on social and political issues, he won the Nobel Prize in Literature in 1925.

I researched the roots of that quote because I wanted to know just that – its roots. I’m always curious to know the person behind the saying because it gives me insight on how I can carry those words in my own life. Shaw had his accomplishments, but he was by no means your typical college-educated, well to do philosopher who had a huge following. He did make waves in a social and political aspect, but he pretty much lived a simple life. Nonetheless, he was cut out from a different pattern of what many people may be used to. Growing up and interacting with different people, there were many scenarios where I just didn’t “fit in”. It’s taken years of mistakes and lessons for me to learn that it’s not about trying to fit in, it’s about using what you’ve been equipped with to blaze your path. I’m still going through that process.

There are so many ways to approach this, including misconstruing it with false definitions such as trying to be someone that you’re not. Let’s kick that to the curb right now before we go any further. That’s not creation, it’s imitation. The human being is so unique and has so many undiscovered features – either we waste time or don’t have the chance to tap into them properly. Welp, let’s take an approach at this whole creating yourself concept. 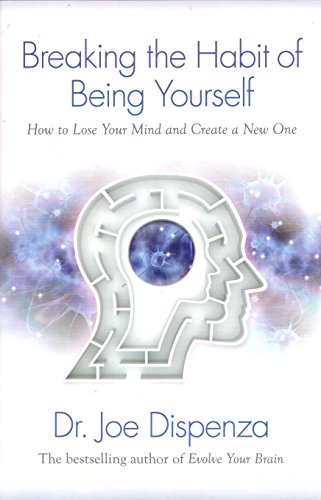 Breaking The Habit of Being Yourself: How to Lose Your Mind and Create a New One
Buy Now

If you ask me (which is probably why you’re reading this blog), it starts with the mind. Anything you want to accomplish, overcome, embark on, begins with the mind. That is why I absolutely love this saying. It takes mind power to create something. A lot of the times we're distracted with day to day things or madness in the media, so we're not really focused on the well-being of our mind. This is also toppled with the blows that may have been brought on by life and it has also had an effect on our minds. When I was going through familial situations, I was concerned about coming out the situation in one piece, meaning I wanted to have peace of mind.

I prayed about this particular issue because I’ve seen people survive the roughest of situations, but that was it – they were stuck in survival mode and never got around to living again. I didn’t want that to happen to me. I wanted to be able to pick up the pieces, be able to put them back together and be a living example of being able to live and not just exist. Once I got past the rough situation and started to put my life back together again, I looked around and realized that I had fought so hard to survive that I was drained of strength to start living again. One of the first things I did towards renewing my mind was let go of the past and not let it define who I was now and who I wanted to be later on. It was definitely easier said than done as there were dark days, sad days, and I won’t ever get out of bed days. But I had to remind myself of what I wanted, surround myself with positive energy. I'm a visual person, so I have to see things in front of me that will help me refocus when I stray away. I will write self-aspirations on sticky notes and post them up. The paperweight in the first picture above sits on my desk at work and at home in my study. Get visual reminders that will be with you throughout the day to keep you focused.

The people you interact with have a huge impact on your mind. Trust me, the number of these types of people were VERY few. I was shocked and disappointed at how my adversity brought out true colors of people I thought were sincere and wanted to see me succeed. Instead they let their own insecurities consume them and wanted to deflect it on me (and my situation). That wasn't going to happen. I could only surround myself with people who were speaking positive things into my life. I needed to hear and see the positive on a consistent basis. I read, watched, and even wrote things that spoke newness into my life. The more I kept seeing and hearing positive, the more refreshed I became. As time went on, things started changing from within. I found it easier to make decisions and speak up for myself.

Sawdust City Wooden Sign - Life Isn't About Finding Yourself, It's About Creating Yourself (Red)
Buy Now

It can be a practical straightforward process.

For some folks, it may not even be a matter of thinking anything through. If they’re done with something or want to see change, they just execute and make it happen. Everyone is built differently. But in regards to the topic of this article, creation is not an overnight process. I personally think that if someone has made a decision to change something about their life, there will be practical straightforward moments where they will have to leap with their eyes closed or just take the step without thinking about the what ifs.

Also taking a step forward is a way of creating yourself. You’re stepping out of the familiar, what you’re used to. Getting out of the comfort zone can be an extremely awkward and mind boggling task.

Handle changes and challenges one at a time

Again, creation is not an instant occurrence. One of the most valuable pieces of advice I've received was from my brother-in-law (out of all people :)). I had just gotten out of a tumultuous situation and was a big pile of mess. I didn't know where or when I was going to take my next step to recover. He told me the only thing I could do was take things minute by minute, hour by hour, day by day - I would be alright. That was four years ago. I must say that I am a totally different person now because of that advice. Things were happening, things were addressed, and things were let go one step at a time. I know, it can be frustrating because you're ready for everything to be done and over with now. You may be ready for everything to be okay in an instant, but it doesn't happen that way. Phases have to come and go. Periods have to begin and end. You will just have to tackle things one at a time and take it step by step. Even if you have more than one situation going on at a time, there is a set time to handle each one and give your attention to it accordingly.

You need to make fear your friend

Yes, you read that right. We've been taught all the wrong things about fear; it's a sign of weakness or something horrible to experience. What exactly is fear? It's another emotion - that is all. And like all other emotions, we experience it from time to time. It's a natural part of the human composition - there is nothing abnormal about it. So the next time you want to talk to your boss about that promotion, present that business idea to management or ask that person you're attracted to out, by all means embrace the fear that comes with it! Don't let it cripple you and control the whole situation. Take a moment, let fear run it's course and proceed with your original plan. It's a part of life, not a life controller.

I have more to say about fear on my freelance writing blog. Check me out at New3Creation!

Why trying to find yourself may be a waste of time

Remember, it's never to late to start over. As long as the page is turned and newness is involved, creation is present and in the works. You don't need to keep looking back to figure out the future, look forward and start fresh. Like Shaw said, life is not about finding yourself. Creation is life!

What methods have you used to make major changes in your life?