Crystal Therapy- Tapping into the Power of Gems

The crystals and gems in Karin's box were shiny and pleasing to look at. 'This one is an emerald', she said, holding out a greenish stone which looked a lot like the pebbles of green glass I sometimes find on the beach. 'It's a low-grade one, not gem quality, so it hasn't been polished,' she added quickly, seeing my puzzled expression.

'This one is a garnet, and this is turquoise.' her long, graceful fingers selected the stones, and she held them out for me to examine, one by one. Some of the stones were tiny nuggets of coloured rock, whilst others were larger, either polished and clear, or milkily opaque. As she quietly explained their properties and uses I began to glimpse their potential. After all, watchmakers have incorporated jewels in the movements of timepieces for centuries, and modern day manufacturers rely on the piezo-electric charge provided by quartz to ensure the accuracy of watches and clocks, and even computers. Crystals of sapphire are also an essential feature in some extremely high tech laser equipment.

So why should I be surprised that they might have therapeutic properties too?

A quick guide to some common crystals and their uses

Amethyst is said to relieve headaches and release tension. In crystal healing it is sometimes used to help reduce addictions.

Aquamarine ranges in colour from blue to blue-green. Sailors and fishermen used to carry Aquamarine to protect them against drowning. It is said to sharpen perception, instil courage and assist you in staying focused in difficult situations.

Emerald is said to re-energise the body, improve the memory, and calm the emotiions. It is used to promote friendship, and enhance relationships. In healing it is used to help ease joint pain and to soothe the eyes

Garnet promotes good health and vitality. Ancient warriors set garnets into their shields to give protection in battle. It can be used to bring courage and help strengthen resolve.

Lapis Lazuli has a deep blue colour flecked with white and gold. It is thought to aid clear thinking and enables self-knowledge. It can be used to enhance psychic ability and help in overcoming depression.

This pretty, clear, green stone is believed to rejuvenate the whole body. It is used to improve self-confidence and to soothe the emotions. It is traditionally used as a protective stone for the aura.

Rose Quartz is a translucent or transparent pink crystal and is said to encourage forgiveness, sooth burns and skin complaints, and assist in healing chest, lung, kidney and adrenal problems. Rose Quartz is also believed to enhance fertlity.

Tiger's Eye is a stone of protection and can encourage a sense of self-worth and self-confidence. It is said to give unleash creativity and attract good fortune in all endeavours.

Said to be beneficial for the throat and the voice, turquoise is used to assist clarity of creative expression.

A net of gemstones

Karin, however, is a persuasive character. Quite apart from being a very clever and interesting lady in her own right, she also has an impressive knowledge of healing therapies. She has studied and practised Ayurvedic Face Massage, Bach Remedies and Reiki, and has a regular and enthusiastic client base, mainly in the Eastbourne, Polegate and Hailsham area of East Sussex.

The first thing to establish with any therapy session is what you hope to achieve from the treatment. Now we were on tricky ground here, because generally speaking I'm in good health, and I don't suffer from any major angst. On the whole I'm quite a practical, feet-on-the-ground kind of person. I wanted to experience crystal therapy out of sheer curiosity, even though initially there seemed little purpose to it. Karin was great, however, and she soon winkled out of me some work related concerns which needed resolution. At first I was sceptical. Although the gems and shiny stones in her box of crystals were very attractive, I couldn't see how they would help with my decision making.

Karin's therapy room has a comfy treatment couch which she invited me to lie down on. A hypnotic music CD played softly in the background, and Karin suggested that I close my eyes and relax. She spoke softly in a 'hypno voice' which made me smile, but soon had me very relaxed indeed.

Now the thing with crystal therapy is that, because you have your eyes closed, you have no idea what the therapist is doing. They could be off having a cuppa with their feet up for all you know, but I'm sure Karin was actually very busy. I was aware of her moving around me in a soft, unhurried way, and curiously, I had sensations of warmth and tingling in my hands, my feet, and my knees as she worked. Eventually, she gently brought me out of my trance by stroking my feet and saying my name. I sat up slowly, stretched and yawned. I felt as though I'd been for an afternoon nap. I felt totally refreshed.

Apart from touching my feet at the end of the session Karin didn't actually make any physical contact with me, so I wasn't sure what she had been doing. All became clear, however, as she brought out the crystals she had been using to balance my energies and help clear my thought processes. Garnets, emeralds, and other stones had been laid around me, either on or beneath the treatment couch. She carefully explained why she had used each stone for her 'net', and what I might expect to experience as a result. Karin is a very sincere person, and I felt extremely buoyed up by her obvious confidence in the therapy.

As with any therapy or health treatment, including conventional medicine, you can never be entirely sure whether things would have improved on their own. But things have improved. There have been subtle changes, and I do have faith in Karin. She has great integrity, and is a good friend. My confidence in her healing abilities led me to visit her some months later with a very real physical symptom. I have periodic problems with one of my knees due to an old injury. As I've got older I've experienced an increasing amount of pain which comes and goes at random depending on the weather, and any excessive activity. This new session followed a similar pattern to the one described above, except that this time, Karin incorporated Bach remedies and colour therapy as well as some hands on healing. The relief that I experienced on this occasion was almost instant, and there really has been a dramatic improvement. So much so that I was able to go for a long hike with my son on Mothering Sunday, completely pain-free. 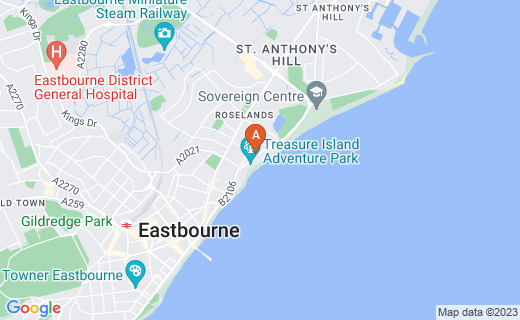 Karin sees most of her clients in the Natural Fitness Centre in Eastbourne, East Sussex

The Natural Fitness Centre in Eastbourne

More about crystals and their uses

Crystal Therapy: How to Heal and Empower Your Life with Crystal Energy
Buy Now