Karanda lived and worked on remote communities throughout Northern Territory and Western Australia.

This young girl, aged two when the photo was taken, is almost certain to develop type 2 diabetes by the time she is in her thirties. During the past fifty years, diabetes has become one of the most life threatening diseases for the modern day Aboriginal and Torres Strait Islander Australian. Obtaining accurate data on the exact number of Aboriginals with type 2 diabetes is difficult, due partly to the large number of people living in remote areas and an ever present wariness of western conventional medical facilities.

The main risk factors for type 2 diabetes in any society are obesity, genetics and diet. In the indigenous population poverty also plays a part. According to statistics it has been estimated that between 10%-30% of the Aboriginal population have the disease. With these figures it means to be born in Australia as an Aboriginal the possibility of contracting type 2 diabetes is two to four times higher than for non-indigenous Australians. There is also a greater chance of Aboriginal women presenting with gestational diabetes during pregnancy.

Why are the Rates so High?

It is believed to be the drastic changes to lifestyle and diet as well as the introduction of alcohol and tobacco that is responsible for such high incidences of Aboriginal people presenting with diabetes. Before European settlement, family groups would walk from one area to the next in search of food that was rich in protein and nutrients. There was no tobacco or alcohol and only a small percentage of the diet contained fatty foods. For many, today’s diet is focussed on quick and easy fried take-away meals.

If diabetes is left untreated, as it is in many cases of the indigenous population, the result is, more often than not, chronic kidney disease. The only way to prevent kidney failure is by receiving dialysis treatment for the rest of the diabetic’s life. In the more remote areas of Australia this in itself creates further problems due to vast distances between home and the major medical centres that provide treatment.

Distance between the two main hospitals in the Northern Territory is nearly 1,500 kilometres while in Western Australia the gaps are even wider. For people living on communities getting to and from town for treatment can involve driving hundreds of kilometres over unsealed roads. 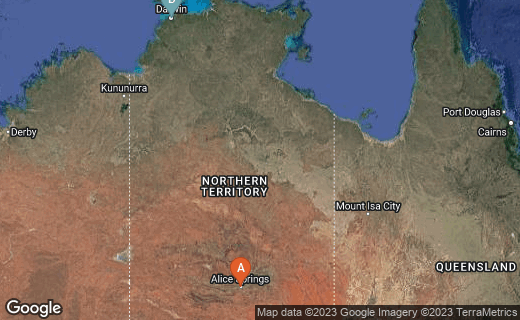 Distance between the two major towns in the Northern Territory is 1498 kilometres or an 18 hour drive.

Darwin Hospital is a long way from remote communities

What can be done?

This is a disease that has been 200 years in the making and will not be going away over night. The first steps toward lowering the number of Aboriginal people with diabetes is awareness and detection before the kidneys begin to fail. Health clinics on Aboriginal communities have improved greatly in recent years but there is still a long way to go to promote changes in lifestyle that will have major long term affects.

Information for this article has been taken from various websites around Australia. Help and resources are available through the following links.

Travel from Home to Hospital

The distances between home and hospital are great over unsealed or inadequate roads. There will be flat tyres and break downs along the way. All the pitfalls that go with getting to hospital for dialysis treatment add to the stress of the condition.

Remote Australia at its Best and Worst