Did you know that yoga can be beneficial to runners?

With roots dating as far back as 5000 years ago, Yoga has impenetrated the modern living with its many benefits. With its seemingly deep and complex nature, it is natural to ask “what is yoga?”

Yoga is a practice that originated from India. It is a discipline which encompasses the physical, spiritual and mental aspects of the person. It is believed that the practice of yoga is geared towards attaining a certain goal and what this goal is depends on the form of yoga being executed.

Nowadays, the yoga’s physical postures are utilized to address certain health problems and improve posture and flexibility. And on a deeper spiritual sense, yoga is used to achieve calmness and inner peace.

Yoga has several key principles. For one, yoga tells us that we are larger than we appear. This pertains to us as Beings, and that we can liberate ourselves from our surroundings, relationships and possessions.

Another principle yoga follows is that it is a continuous practice. The practice of yogic postures can pose several health benefits, but it doesn’t stop there. Mindful practice of yoga also leads to tapping the deeper sense of the spirit.

In short, what is yoga for many practitioners is not just merely about unleashing the immediate body’s potential. It is about getting to understand one’s self through self-discipline in order to get in touch with one’s mental and spiritual well being.

Have you ever tried yoga?

What is Yoga’s Benefits to Runners?

Although yoga and running seem not to be a perfect pair at first look, they actually complement each other. Several fitness enthusiasts are beginning to see how the marriage of yoga and running can be beneficial for one’s training.

Most runners see that pain and injuries are the bane to their training. Yoga helps minimize these through improving the body’s strength and flexibility. Whereas runners feel muscle tightness during and after the training, yoga will help loosen and relax them. It efficiently aligns the bones and muscles in order to prevent stiffness and injury.

While yoga can be intense in other forms, it can also be restorative in nature. This type of yoga helps runners deal with their bodies after an intense training. With the combination of postures such as Supported Fish and Corpse Pose, the body can go into a state of relaxation.

Lastly, yoga can help runners get their mindsets straight. It has the ability to tune out the chatters of a runner’s mind that can make him disoriented. Furthermore, yoga teaches the importance of enjoying the gradual process of the run, rather than focusing on finishing the routine. With yoga’s body and mind exercises, it can definitely help you to be continuously motivated with your next running practices.

Therefore, what is yoga for runners is the yin to the yang. Putting the practice and principles of yoga to complement a running routine will help a runner achieve more, not just in distance, but more importantly in his overall performance. 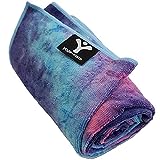