Early Result Pregnancy Tests - Are They Really A Good Idea?

Through her passion for writing and coaching, Rachael shares her experience and support in the journey of loving an addict.

Although the Greeks and Egyptians had their ways of testing for pregnancy as far back as 1300BC, it wasn't that long ago, through the rest of the world, that the only way a women would know she was pregnant was when more than a moon had passed since her last period, and her tummy had started to swell.

These symptoms would often be accompanied by nausea or vomiting, tiredness and tender breasts, which would signal that a women was with child.

Although there were many theoretical tests that would have been undertaken, there weren't the scientific tests that we have today, that could say for sure, and the only way to know whether things were progressing and going well, was the health of the women, and the eventual delivery of a healthy child.

Things have changed a lot over the last 100 years

In 1928 the pregnancy hormone hCG was discovered.

At first it was thought that this was produced by the pituitary gland but the discovery that it was actually produced by the placenta shed light on the possibility of testing for pregnancy, based on the presence of this hormone.

It was another 40 years before it was possible to test for hCG outside of a labatory. Until then a women's urine would be tested for hCG in a number of different ways, including injection into rats, rabbits and mice to measure their reaction to the presence of hCG.

In the late 1970s home pregnancy tests finally got FDA approval and came onto the market. Suddenly women could test for pregnancy, relatively easily, within the privacy of their own homes, if they had any suspicion of being pregnant.

Early test literature suggested testing 2 weeks after the date your last period was due.

With the invention of more modern tests that could detect much smaller amounts of the hCG hormone, the waiting period to discover whether a women was pregnant or not, was severely reduced or was removed altogether.

And as the years went on, women (along with everyone else) also moved into a societal climate where instant results became even more important, and expected.

Today, we want to know, do and have everything within an instant. We are used to having information at our finger tips with the internet, we can reach our friends with a few taps on a screen keyboard, and if we want to read a book, we can download it and be reading within a few minutes.

So it's only natural that when it comes to matters of the body, and creating a family, we would want to be just as expedient.

Certainly, early knowledge of pregnancy is advantageous in terms of prenatal care, but how early is too early? 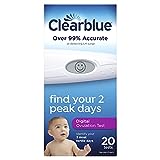 Why Early Testing For Pregnancy Can Set You Up For Heartache

What many women don't realise, when they take that first test, is that researchers believe that up to 40% of pregnancies result in miscarriage.

Less than 50 years ago, this wasn't known because women weren't testing for pregnancy so early, at home.

Instead, without knowing that they were pregnant earlier, a women would begin to bleed and pressume it was her period, signalling another unsuccessful attempt to get pregnant.

What she wouldn't know, without having tested, is that she was in fact pregnant, and was now miscarrying.

With modern, early result pregnancy tests able to pick up low levels of the hCG hormone in a women's urine, she can know within just a week of fertilisation that she is pregnant. A week that might in the past, have gone by unoticed or just taken as a late period.

But now, this women 'knows' she is pregnant. If she was trying to conceive, she becomes excited and plans how to tell everyone.

The reality of this situation, is that within a short period of time, that pregnancy could terminate, causing a miscarriage.

You might say that knowing about these miscarriages is useful and more accurate information, which can only be true for science, and for those with a strong emotional and mental constitution.

But for a women who desperately wants to be pregnant, has been trying for a long time or had begun to plan for and love the child within her body, knowing she has miscarried can be a heartbreaking experience.

A sniff of hope through a pink line on a pregnancy test, can be shattered through the reality of nature. A women who is trying to conceive can now test and know about every miscarriage and feel every loss, which is more than many women can cope with.

You can again argue, that early testing is useful. It allows for lifestyle changes to be made early on, to protect the health of mother and child, it can enable early care for high risk pregnancies, but it can also create a lot of worry, stress and heartache should things not go as well as hoped for.

What these new, early result tests do, is provide women with options.

If they believe they are pregnant, and want to know, they can test and likely find out an answer.

On the flip side, if they are aware of the statistics, or feel that testing too early will cause worry and make them anxious, then it is recommended to take the advice of the early literature for home pregnancy tests and wait until they are at least 1 week overdue for their period before testing.

This might feel like a lifetime, but doing so reduces the chances of receiving a positive test, that shortly thereafter miscarries.

Of course the first trimester of any pregnancy holds the risk of miscarriage, but it is much less than the high percentage of those pregnancies that miscarry within the first 6 weeks.

Ultimately, early result pregnancy tests will of course be favoured by anyone who has received a positive result and gone on to have a healthy pregnancy, but if it could be that taking the slower path to knowledge would cause a lot less heartache and pain for the many women who weren't so lucky.