Anger is a strong desire to take control of a bad situation. People and animals express it physically or through sound to try to get what they want. Like fear, anger is a useful emotion. It can help you survive and thrive. Sometimes people choose not to express it. They stop being angry or they hold it in. Displaced anger is when a person directs their anger at innocent people, animals, plants or objects.

Try to become angry. The first thing you should notice if you are paying attention is that your breathing changed. You start to breath like an angry person and you may find yourself thinking like one. Changing to fast shallow breaths and thinking about bad things can make you angry. You can easily control the way you breath and what you are thinking about. So you can make yourself angry.

When a person or situation makes you angry they are not causing you to take fast shallow breaths and they are not controlling your thoughts. So they are not really making you mad. You make yourself angry. When my large dog attacked me I became angry. However my dog does not make me mad when he attacks me. If that were the case I would still get mad when he did it. Once I figured out that getting mad just made the problem worse I stopped making myself mad and tried other options.

Holding on to anger is bad for your mood and your health. It is a burden. Carrying it around is like carrying a heavy weight on your shoulders or having a heavy weight on your chest. You want to release the anger to make yourself feel better. One way to release the anger is to express it. Get it off your chest by directing it at someone or something.

Another way to release anger is to breath like a calm person and think about things that make you feel happy and relaxed. People that are very relaxed use deep slow abdominal breathing. Their belly expands and contracts when they breath. I try to use deep slow belly breathing most of the time. It reduces stress and anger. When I want to feel more relaxed I often think about one of my relaxing beach experiences.

If being angry does not help then it hurts. Anger is only useful if it gets you to act in a way that makes things better. For instance, you express anger so a person will stop bothering you. Either the person stops bothering you or you learn that you need to use another approach. Being angry is not useful when expressing anger is not going to help you fix the problem and being angry for an extended period of time is bad for you. So holding on to the anger just hurts you. You can always become angry again later when you have a chance to deal with the problem.

Become angry, express it, then let go of the anger. Use it if you think it will help but usually it should not be the first thing you try. Most of the time getting angry just makes the situation worse. It often has negative consequences.

People become angry because they want more control over a person, a situation or their life. Sometimes they try to take control. Other times they just think about it. There are lots of things you can't control but you can always control yourself. You control your thoughts and actions. Take some time and do things for yourself that make you feel like you are in control. Focus on yourself.

One of the reasons I like to exercise is because I can use it to change the way I look and my physical abilities. I wanted broader shoulders so I exercised and gave myself broader shoulders. I wanted to be able to bike 37 miles so I increased the distance I could bike. When I wanted to be more relaxed I learned how to meditate and how to use deep slow belly breathing. Then my seasonal allergies went away. 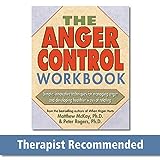 There are people that get angry a lot. They are frequently yelling and using threatening body language. At times they may get physical by grabbing, pushing or hitting. Frequently being angry and very intense anger causes a lot of problems even if you don't express it. Anger is both useful and harmful. So you should get angry but you should not do it very often, it should not be very intense and it should not last very long. Reduce the amount of anger by trying other options first.

Don't go straight to expressing anger. Think of your options before you act and keep expressing anger as your last option or at least one of your last options. Start by being calm and relaxed. While at the beach I heard a man politely asking some kids to stop getting sand on him, his wife and their towels. The father of the kids became really enraged and spent a long time expressing his anger. Apparently he did not like people speaking to his kids. There was no need for the father to go straight to expressing anger or to be that angry. Politely asking the man not to talk to his kids would have been enough and it would have been much quicker.