"If the head and the body are to be well, you must begin by curing the soul; that is the first thing... the great error of our day in the treatment of the human body, is that physicians separate the soul from the body ." Plato

The common hypothesizes among practicing energy healers is that in healing, we use the Life Force Energy that resides within all humans. Hippocrates hypothesized that the healing energy or the power of nature was the vital force of life. He also thought that nature heals the patient, not the doctor, another common belief among seasoned healers. Unfortunately, Hippocrates also believed that the body and mind were separate. The Pythagoreans believe that body and mind were united. Many cultures before Christianity had what were called incubation temples for the sick, where they encourage dreaming; priests interpreted dreams, which were used for self diagnoses. Even during the Middle Ages, some of the churches actually provided mattresses and baths for this purpose. This is similar to Edgar Cayce (March 18, 1877 – January 3, 1945), who went into trance with the intention of diagnosing and healing others.

Some types of healing that have been studied are what are referred to as type I healing, where the healer establishes an altered state of consciousness and deep focus of attention, the same as meditation and hypnosis (all hypnosis is self-hypnosis). The only attempt of healing is no attempt at all, but to simply ask for the highest and best good of the patient. In other words, a healer does not "try" to heal, but assumes healing takes place. Laying on of hands is a type II healing technique that can be done while in an altered state that it is not necessary.

Energy healing has been around for many thousands of years. Even in early Christianity, some priests were chosen as healers. They used the laying on of hands, some used prayer. Sadly, the church gradually turned its back on the natural use of energy healing after the conversion of Constantine to Christianity. But the church pretty much neglected all healing gifts. From there the church not only discouraged, but persecuted healers who are outside of its support. Eventually, the only two healing practices recognized by the church where the ritual of exorcism and the sacrament of unction in which the dying were anointed with holy oil.

There are many forms and methods of energy healing. There is Reiki from Japan, the most widely known form of energy work which can have powerful effects. It was started around 1914 in Japan by Dr. Mikao Usui, who received the knowledge of how to heal during a mystical experience.  Acupuncture and Acupressure part of Traditional Chinese Medicine, is about 5 to 6 thousand years old.  This practice inserts hair-thin needles, or pressure, into specific points in pathways called meridians, to open blocks that hinder healing on a molecular level.

Therapeutic Touch was made popular by Dr. Dolores Krieger, Ph.D., R.N. and is widely used in hospitals today.  The therapist centers herself to an inner reference of stability.  She then assesses the patient's energy field, then extends her energy into the energy field of the patient with the thought of bringing about wholeness to them.  There is generally little or no touching.  There is much research that can be found on the efficacy of Therapeutic Touch Healing Touch also works in the human energy field, using techniques such as human magnetic healing, using techniques called  ruffling, wound sealing and filling, also with sophisticated research.

The Therapeutic Touch: How to Use Your Hands to Help or to Heal
Buy Now

Psychotherapy  is a form of energy healing in that there is often a shift on the part of the patient's thinking.  A shift in thinking affects neurotransmitters, hence, can affect thinking processes.  Hypnosis is also often effective as the power of suggestion enters the patient's unconscious mind. Also shown to be effective in some cases is spiritual healing, where the healer is of such a high belief in their connection with the Creative forces referred to as God,  that they can either lay-on hands, or even send healing from a distance. Massage is also shown to have healing benefits.

An excellent pilot study done on psychic healing, was a doctoral dissertation at Union graduate school, yellow Springs, Ohio 1974. It showed that people in the study can identify subjective sensations during distant healing with a high degree of accuracy. Physical changes were not the subject of this study, but it did show that the energy not only traveled, but was experienced by distant receivers.  Acupuncture is not dependent on belief, as some think. Studies have shown efficacy in babies and animals. Many veterinarians use acupuncture with great success.

Perhaps healing is simply the energy of caring thought, commitment, and electrical transference from the willingness to help another being. 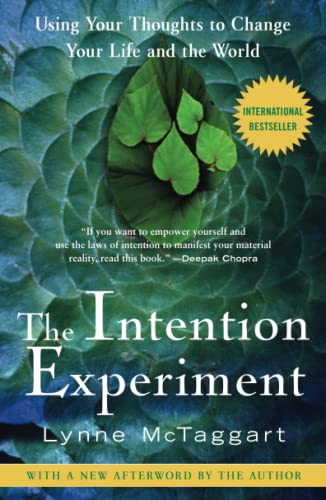 The Intention Experiment: Using Your Thoughts to Change Your Life and the World
Buy Now

Have you had any experience with healing, either as a healer or healee?