According to Indus archeologist Gregory Possehl, Several steatite seals discovered at Indus Valley Civilization sites depict figures in a yoga or meditation like posture, dating back to 3300–1700 BC. Possehl points out sixteen specific "yogi glyptics" in the corpus of Mature Harappan artifacts. These artifacts disply a level of discipline and concentration or the yoga pose.

One of the earliest images of yoga is known as the “Pashupati seal.” This seal was discovered during excavation of the Mohenjodaro archaeological site in the IndusValley and has drawn attention as a possible representation of a "yogi" figure. Observers have described the figure as sitting in a traditional cross-legged yoga pose with its hands resting on its knees.

The desire for personal greatness in ancient times of health, freedom, longer life and understanding self worth gave birth to yoga as physical, mental and spiritual energy exercise. This spread throughout the world. Early writings on yoga were inscribed on palm leaves and stone. Yoga also finds its place in the scriptures of the Vedas and Upanishads. The ancient yogis performed the India's ancient Vedic religion, mainly emphasized on rituals. Later yogis want a direct spiritual experience and not symbolic ritual.

This development became yoga. Yoga is the relationship between body and mind. This method combines all the movements with various breathing and meditation techniques that ensure peace of mind and physical health. The word "yoga" means "union"; the conscious integration of body, mind and spirit with the awareness of the One. Stretching without involving the mind is ... stretching. Actively connecting with the body through thought and conscious breathing, while remaining aware of spirit, comes closer to the idea of what yoga advances.

Teachers of yoga started travelling to the west, to attract the followers during the period 1800 and 1900.

(Hatha Yoga, is a system of Yoga introduced by Yogi Swatmarama, a sage of 15th century India, and compiler of the Hatha Yoga Pradipika. This is a stage of physical purification that the body practices for higher meditation. The Asanas and Pranayama in Raja Yoga were what the Hindu Yogis used to physically train their body for long periods of meditation. This practice is called shatkarma.) 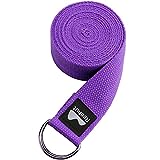 Yoga is Energy for All Ages

Do You Believe In the Energy of Yoga?