Pedicures are very popular among modern people. Many new salons are trying to bring new method of treating the feet and toes.

One of the latest methods of treating the feet and toes is by using flesh eating fish called Garra Rufa. It is also known as Doctor fish due to their ability to cure some most important skin diseases such as eczema and psoriasis.These toothless fish gently nibble of dead skin of the feet and as a result the skin of the feet becomes smooth and beautiful. Actually this fish saliva contains a healing protein and getting better result on feet and skin.We will get a ticklish and fizzing sensation on the feets. For this treatment person’s feet has to soak for fifteen minutes in large fish tanks with approximately 100 Garra Rufa fish. The most important factor is to sterilize water not less than five times an hour. 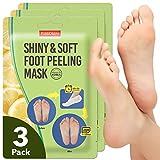 It was most popular in Turkey for many years and after it spread to other countries like America,Europe and Asia.In 2006 some fish spa resorts opened in Japan,China,Singapore where the fish used to clean the bathers at the spa.In 2008 the fish pedicure service was opened in United States. In 2010 it started in India, Thailand, Indonesia, Malaysia, Philippines etc.