There’s nothing like a good book and a cup of soothing herbal tea, right? And it’s especially gratifying when that delicious tea is packed full of powerful nutrients that are beneficial to our health as women. Tea from the following five herbs offers antioxidants, vitamins, minerals, and other compounds with vast therapeutic properties.

How to Make Fresh Ginger Tea

The scientific or botanical name for ginger is Zingiber officinale. It derives from the Sanskrit “singabera” which means “horn-shaped.” Other names include Zingiber Officinalis, African Ginger, and Jamaica Ginger. This tropical perennial is native to India and other eastern Asian countries. It has been used therapeutically in those regions for centuries, mainly to ward off colds and flu. It was later brought to the Mediterranean, parts of Africa, the Caribbean, and the Americas. The ginger shrub reaches about four feet in height, has slender green leaves, and blooms clusters of yellow flowers.

The part of the plant used is its rhizome or root. The skin is thick or thin and light brown. Its fibrous flesh is yellow, white, or red.

Ginger is packed full of soluble and insoluble fibers, antioxidants, amino acids, vitamins B, C, and D, and minerals calcium, copper, magnesium, potassium, and zinc. It also has sugar, carbohydrates, and fatty acids.

Research conducted by the University of Maryland Medical Center (UMMC) shows that ginger relieves morning sickness in pregnant women. Another study published in the BMC (Bio Med Central) Complementary and Alternative Medicine in 2012, proved the rhizome’s ability to alleviate or decrease menstrual cramps. It diminished pain in both the abdomen and the back. Ginger also relieves bloating, headaches, migraines, and blood clotting. Research presented at the 97th Annual Meeting of the American Association for Cancer from the University of Michigan revealed its remarkable results as a treatment for ovarian cancer as well.

Ginger’s Side Effects and Drug Interactions

Ginger could cause mouth and throat irritation, heartburn, diarrhea, sleeplessness, and an increase in bile production. Avoidance is recommended if you have gallstones or will be undergoing surgery. And though helpful to diabetics and heart patients, ginger could be also harmful, so caution should be exercised.

If you are taking anticoagulants or blood thinners such as Plavix or Coumadin; ibuprofen such as Advil or Motrin; diabetes medication such as Amaryl, Avandia, or Orinase; high blood pressure and heart disease medication such as Procardia, Cardizan, Plendil, or Norvasc, you should also avoid using ginger.

Ginger can be used fresh, dried, or powdered. You can make your own tea or purchase it in already-made packets. The taste has a bit of a bite. Besides tea, ginger’s other culinary uses include spices, pickled, and candy. The rhizome is used as an ingredient in medicines and cosmetics as well.

How to Make Lemon Balm Tea

The scientific name for Lemon Balm is Melissa officinalis. Melissa is the Greek word for “bee.” Other names include Melissa, Honey Plant, Sweet Mary, Sweet Balm, Bee Balm, Cure-all, and Dropsy Plant. The perennial herb is from the mint family and is native to Europe. But it grows globally. Ancient Greeks used it a couple of thousand years ago, and it was quite popular in the Middle Ages. It’s reported that King Charles V of France drank Lemon Balm daily for optimal health. Studies conducted in 2003 did produce evidence of its healing properties.

The shrub reaches an average of two feet in height. Its oval leaves are wrinkled and dark or yellowish-green with a sweet-lemon fragrance. Its small flower clusters are white to light yellow and bloom in spring and summer.

The chemical constituents in Lemon Balm include antioxidant flavonoids, soothing terpenes such as citronellal, antiviral tannins, anti-bacterial and viral polyphenols, and a bitter principle.

Side effects include nausea, abdominal pain, vomiting, dizziness, skin irritation, and drowsiness. Avoidance is recommended if you are pregnant, breastfeeding, or scheduled for surgery. If given to children younger than twelve, use sparingly and for a short period.

Lemon Balm can interact with sedatives such as Clonazepan, Ambien, and Ativan as well as thyroid and HIV medications.

Lemon Balm’s dried leaves (from young shoots) are made into extracts, oils, and powder. Besides tea, it is used in punches, salads, stews, marinades, sauces, jellies, and jams.

How to Make Lavender Tea

The botanical name for Lavender is Lavandula angustifolia. It comes from the Latin Lavare which means “to wash.” Strange, but it refers to the shrub’s propensity to grow rapidly and extensively. Other names include English Lavender, French Lavender, Garden Lavender, and True Lavender. Though originated in the Mediterranean, Lavender is found in Japan, Australia, the United States, and elsewhere. It favors dry, sandy, or rocky habitats, and grows between one to three feet in height. Leaf shape depends on species, but most have wispy hairs. The flowery whorls, which bloom in spring and summer, can be lilac, violet, dark purple, or blue.

There is evidence that ancient Egyptians used Lavender in their embalmment rituals and as a perfume for the living. And it’s recorded that Queen Elizabeth the first of Britain enjoyed the sweet, floral flavor of a steaming cup of Lavender tea on occasion.

A cup of Lavender tea can relieve menopausal insomnia, anxiety, moodiness, or depression. Research (on the elderly) shows the herb to be more effective than pharmaceutical sleep medication [see www.organicfacts.net: “Health Benefits of Lavender Oil”]. It can also relieve pre-menstrual and menstrual bloating, cramps, migraines, irritability, and fatigue. It’s all due to the plant’s calming effect on our nervous system. Lavender can also treat urinary tract infections.

Other benefits of Lavender include relief from indigestion, emotional stress, respiratory ailments such as sinus infection, laryngitis, tonsillitis, bronchitis, and the flu; skin issues such as psoriasis, acne, wrinkles, and dry skin; muscle and joint aches, and bladder inflammation. Lavender also increases blood circulation; supports the immune system; rids the hair of lice and nits, and is good for hair loss and bug bites.

Lavender’s Side Effects and Drug Interactions

This herb should be avoided if you are pregnant, breastfeeding, about to have surgery, diabetic, or allergic.

Lavender also interacts with sedatives, and if used by boys, can cause abnormal breast growth called gynecomastia.

Lavender flowers can be used dried or fresh, but the dried version offers a stronger flavor. Besides tea and tea blends (usually with mint or lemon), it is used in other beverages, desserts, scones, honey, salad dressings, sauces, spices, flavorings, and garnishes. It is also used in herbal medications, aromatherapy, and cosmetics.

How to Make Raspberry Leaf Tea 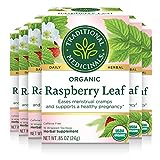 Raspberry Leaf’s scientific name is Rubus idaeus. “Idaeus” refers to a region in Northern Turkey. Other names include simply Raspberry, Red Raspberry, European Raspberry, and Framboise. The rose family shrub is native to Asia Minor and North America where it was popular folk medicine among indigenous women from the Cherokee, Mohawk, and other tribes. Evidence shows that Raspberry Leaf’s use in herbal medicine dates back to 1597.

The perennial, thorny plant can reach a height of eight feet. Leaves are large and pale green in color. Flowers begin to bloom in the spring of their second year. The fruits are red.

It is recommended that women with breast, ovarian, and uterine cancers, fibroids, and endometriosis avoid Raspberry use since it may have estrogen-like properties. Despite its reported benefits during pregnancy, some medical personnel advises that it should be avoided during your entire pregnancy or at least in your first trimester. A 2011 study published in Complementary Therapies in Clinical Practice indicated that Raspberry Leaf tea might increase Cesarean deliveries [see www.healwithfood.org].

There is no evidence of harmful drug interactions in this writing.

How to Make Stinging Nettle Tea 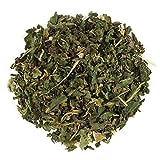 The scientific or botanical name for Stinging Nettle is Urtica dioica. Other names include simply Nettle, Common Nettle, Nettle Leaf, Chinese Nettle, Great Nettle, and Bichu. The thorny plant grows globally and has many sub-species. Ancient Greeks used it as a laxative and diuretic. The American varieties produce both female and male flowers. The perennial shrub can reach a height of seven feet but averages three. The hairs on its heart-shaped, thick-veined, and dark green leaves secrete venomous liquid, which causes the stinging sensation when it enters the skin. Flowers are almost unnoticeable. Nettle is considered a nuisance weed.

Studies show that Stinging Nettle tea can reduce the symptoms of pre-menstruation, menstruation, and menopause (including osteoarthritis); strengthen the fetus of pregnant women; prevent anemia and fatigue; balance hormones; help reduce the possibility of hemorrhaging after childbirth, and increase milk production in those who breastfeed. Nettle seems to aid in fibroid removal as well.

Though Stinging Nettle offers great relief to pregnant and breastfeeding women, it is also recommended it not be used. Caution should also be exercised if you suffer from diabetes, blood pressure issues, and kidney ailments. Stinging Nettle may cause allergic reactions.

Stinging Nettle’s dried and fresh leaves, roots, and seeds are used in making the tea as well as extracts, ointments, powders, compresses, and hair care. The flavor is refreshing but slightly bitter and grassy.

Note, herbal teas can be purchased on or offline from health food stores. You can also check the health and tea sections of supermarkets.

This article is simply to provide information and does not suggest you use these herbal teas or herbs to treat any reproductive issue or any of the other ailments and health problems mentioned. Always consult your healthcare professional first.