There are all sorts of groups to help people quit various addictions - narcotics, nicotine, alcohol, sex, overeating, gambling, the list goes on and on but have you ever heard of caffeineoholics anonymous? What about caffeineanon? I haven't either but I seriously think they should exist. Caffeine, after all, is a drug - a very addictive one. And if you, like me, have ever tried to quit, you know there are serious withdrawal symptoms.

The Road to Addiction

My road to addiction began when I worked full-time and my five-year old was a baby. My shift began at 7:00 a.m. which meant getting up at 5:30 in the morning. Because my daughter didn't sleep through the night, neither did I. I began each day with a coke and a bag of m&ms for a little pick-me-up. After a while, that didn't seem to do the trick anymore so I exchanged my coke and m&ms with coffee from the Burger King drive-in.

As with any addiction, a tolerance begins to develop and the same dosage of caffeine no longer has the desired effect. A larger dose is then needed to produce the results that happened when you first began taking the drug. Four years after having to get up at 5:30 a.m., I was drinking a venti (that's the largest size at Starbucks) macchiato, plus an afternoon cup of coffee or a chocolate bar. At this point, I knew I had to do something about this addiction. Not only did caffeine seem to be consuming my life, I had also gained weight as a result of eating sweets with my coffee.

I knew I wanted to quit drinking caffeine, mainly for health reasons. I had struggled with migraines for years and I was beginning to have digestive issues as well. After doing some research on the Internet, it seemed my caffeine intake could have something to do with my current state of health. Besides that, I hated how I felt when I hadn't had my caffeine fix for the day. I couldn't think straight and I was very moody and irritable. (Just ask my husband). I wanted to quit taking this drug but it seemed everywhere I looked I could not escape its bondage. For example, our public library where I went to write, had just opened a coffee shop. Also, McDonald's had opened their new line of McCafe beverages and I loved their hazelnut iced coffees.

Besides fearing the withdrawal symptoms, there was another reason I liked coffee - the social aspect. It was like we coffee lovers belonged to our own club, especially at work. It was always fun to gab around the coffee pot before our day began. This may sound weird, but drinking coffee with friends and co-workers gave me a sense of belonging.

Help is on the Way

Since I loved the taste of coffee, I felt that if I could find a replacement beverage it would help me quit drinking it. I didn't want to switch to decaf because I heard that was just as bad as drinking caffeine. One day while surfing the Internet, I came across a product called teeccino (see more about Teeccino below). It is a non-caffeinated herbal coffee-tasting drink. Excitedly, I ordered the free sample pack they offer. The teeccino came in different flavors and after finding my favorites, I ordered some in larger quantities.

I was still afraid of having withdrawal symptoms so I followed the formula on teeccino's website - during a two week period slowly start increasing the teeccino and decreasing the coffee. (The teeccino is made in a coffee pot just like coffee). Two weeks later I was caffeine free with no withdrawal symptoms! A couple weeks later I began to notice how much better I felt. I felt more clear-headed and focused. I was so proud of myself for overcoming my addiction. Or so I thought.

Falling off the Wagon

As with any addiction, it is easy to fall off the wagon. I was caffeine free for almost two months before I had coffee again. My husband and I had gone into a coffee house where I had every intention of ordering a non caffeinated beverage. I could not, however, overcome temptation. The smells were tantalizing. I should have fled but instead I gave in. From that point on I began drinking caffeine here and there. The final blow came when my family went to Canada for Christmas. I blame it all on Tim Hortons. If you're not familiar with Tim Hortons, it is a coffee and donut shop started in 1964 in Ontario by the late Tim Horton, a former NHL hockey player. Combine hockey and coffee in Canada and you have quite the phenomenon.

Although I have not returned to my venti macchiato Starbucks state, I am still drinking half teeccino and half coffee with the intention of quitting for good. My battle with caffeine has made me realize how hard it must be to quit smoking or taking drugs. I have the utmost respect for those who have overcome their addictions. Hopefully one day I will overcome mine!

Teeccino is an herbal coffee drink that has no caffeine. It tastes just like coffee and you can drink it hot or cold. It is made from herbs, grains, fruits and nuts. It also contains inulin which helps with digestion. There are also recipes on their website such as mocha teeccino frappes (which are delicious and taste just as good, if not better than Starbucks.) There are two groups of flavors called Mediterranean and Maya. The Mediterranean flavors have a sweeter, lighter taste while the Maya flavors are dark roasted and more bitter. You can go to their website below for more information. 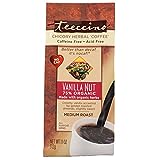