How To Heal Your Back: 3 Methods for Back Pain Relief

Back Pain: Everyone Suffers From It Sometime During Their Lifetime

Back pain, tooth ache and stomach aches are some of the worst pains that a human being can suffer. The latter two are usually easily relieved, but no doctor has been able to effectively fix back ache. Because of this it is crucial that you know how to heal your own back.

My Story: How I Suffered From Chronic Back Pain For Years

In December 2003 I ripped my lower back muscles (the erector spinae also known as sacrospinalis muscles) doing a personal best Deadlift. The immediate pain was searing hot and I immediately hobbled out of the gym. According to my doctor’s diagnosis I not only tore the muscles but also slipped a disc.

According to all the doctors I consulted the only option was surgery – and this was definitely not an option for me. I have worked in medical insurance and had never heard of a successful back operation, not to mention all the horror stories.

I lived this way for several years and I believed that the only option was for me to live with and learn to manage my back pain with over-the-counter medications.

In reality though, I did not feel that I could live like this. I woke up in pain every morning and this would leave my in a grumpy mood for most of the day. I could only drive my car for short periods of time and any time I had to sit, stand or lie down in the same position for longer than a few minutes I would be in unbearable pain.

I soon realised that I did not want to live like this anymore and began researching methods that people have used for healing their own backs.

1. The Russian Geophysicist Who Used Exercise to Rehabilitate His Back Injury

I read an article by sports conditioning expert Thomas Kurz in the March 2003 issue of TaeKwonDo Times about an article that appeared in the Russian sports magazine Fizkultura i Sport (no. 10 2002) about Russian geophysicist V. M. Khudyakov who in 1994 spent a month in hospital with a herniated lumbar disc.

He related how his pain subsided a little after his hospital stay. With the help of electro-acupuncture he was able to manage the pain but he was still nowhere near good health.

Still in immense pain and knowing that the medical establishment could not help him, he decided to help himself by strengthening the muscles of his spine. Though he started small, this is what his daily home training regimen eventually looked like.

He started his morning routine with an ice bath and a sauna and followed that with a 45 minute workout.

His exercise routine consisted of old-fashioned back callisthenics like forward bends, back extensions, trunk twists and head circles that he did in sets of 100. He interspersed these exercises with 20 push-ups.

This daily regimen brought quick back pain relief and strength but the pain would return occasionally after he spent hours bent over whilst digging.

He then increased the amount of repetitions to 200 and the total amount of push-ups during the workout to 200 and felt even better. This morning routine was eventually supplemented with an evening routine doing squats and abdominal exercises.

After investigating this information further, I found a similar routine in Pavel Tatsouline’s (the man who introduced kettlebells to the west) book Superjoints. In it he describes an octogenarian, doctor Asomov who performed 2 heart surgeries per day wearing out 2 crews, who kept up his energy by performing a daily routine of 12 exercises for 1000 repetitions.

2. Treat Your Own Back - Gerald McKenzie

I found this book by Gerald McKenzie whilst browsing on Amazon.com. It received some glowing testimonials (as well as a few negative ones) but promised enough to pique my interest.

He discovered his groundbreaking yet counter-intuitive method quite by accident. Early on in his career as a physical therapist, a client with a chronically bad back came to see him. This client was doubled over and walked into his office in a completely awkward manner.

The patient arrived while he was finishing up with another client and he asked this new client to lie face down on the massage bed in the next room and wait until he has finished.

Unbeknownst to him, the top part of the best was standing at a 45° angle and when he walked into the room he discovered to his horror that the client was lying at this very dangerous angle; face down and with his upper body at 45 degrees.

In complete shock (because his conventional training taught him that this was dangerous) he asked the client how he was feeling.

To his complete surprise the client answered, “Much better, thank you”.

Not knowing what else to do, he got the client to go home. When he left he was still a little bent over but it was much better than when he had walked in.

When the same client came in later that week, he did the same thing, and when the client left this time, he was walking completely upright.

From this experience McKenzie developed the methods that he teaches to other physical therapists; yet it is so simple that you can learn it from one of his books.

Back pain relief method No. 2 - check!

You Can Check Out "Treat Your Own Back" On Amazon 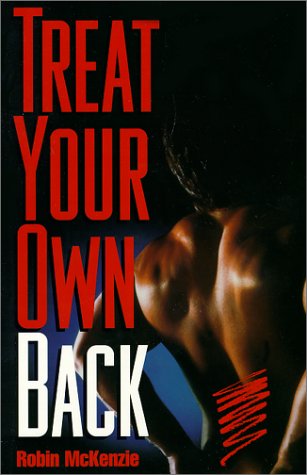 Treat Your Own Back
Buy Now

This is one of the most counter-intuitive methods that I discovered to date, but it is also the most effective. It is a method that uses acupuncture meridian tapping (with your fingers) to make changes in your body’s beliefs and emotions.

And, surprisingly, it was the method that gave me the best results… instantly.

Back pain relief method No. 3 - check!

An Introduction to EFT

How to Help With Back Pain: How I Did It

So this is how I healed my own back.

My first discovery was Gerald McKenzie’s book “Treat Your Own Back”. Reading the Amazon reviews convinced me that I could rehabilitate my back. Seeing that others with varying degrees of injury (some worse than mine) all received benefit from the program gave me the encouragement to start.

In the book he explains how back problems are created in the first place and how to not only rehabilitate your back, but also what changes you need to make to your posture so that the problem does not continue.

The exercises gave me relief and I did them several times per day. I also made changes to the way I walked and sat. Through this I began to sense when my posture was going out of whack.

But, although it would give me temporary relief, the underlying pain and discomfort remained and would flare up several times per day.

That is when I discovered the Emotional Freedom Technique (EFT). It was recommended to me by Amazon and as healing my back became my pet project I decided to have a look at it. Searching the web I found that some people have used it as an effective cure for back pain.

Then it came back again and the pain level settled at about 6. I realised that I couldn’t keep this up either, so taking into account all of the information I had collected I decided to design my own workout.

Taking elements from the workout routine that I found in Superjoints and from V. M. Khudyakov, adding the information from “How to heal your own back” and adding some EFT to that, I created a comprehensive morning routine.

This reduced my back pain so effectively that I now barely feel any pain at all unless I really strain myself or get overly tired and then I only experience a mild ache.

After living with chronic back pain for so many years I can honestly say that I am finally pain free! With a combination of these exercises for back pain you too can discover how to heal your back, how to prevent future injuries and how to continue making your back stronger.

Give it a try (with the approval of your doctor of course!). You have nothing to lose and relief from chronic back pain to gain. Good luck!

You Can Get Any Of These Products From Amazon